The Palestinian leadership has given up on trying to convince the Israeli public of the need for peace, but what options does it have without resorting to violence? 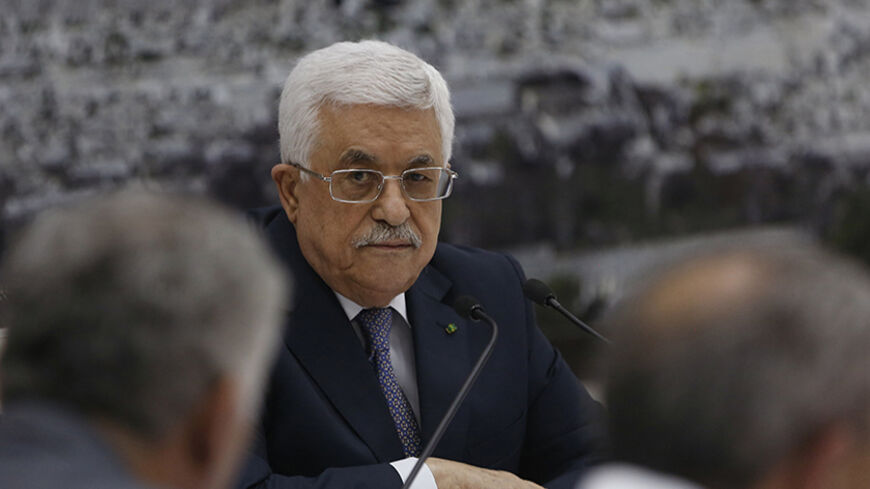 It might seem counterintuitive, but the current Palestinian-Israeli hostility is a healthy return to what relations between occupiers and the occupied should be. Thus far, it is largely a rhetorical escalation in hostilities, but such words often quickly become action.

In this war of words, Palestinian President Mahmoud Abbas, speaking before the UN General Assembly, called Israeli actions in Gaza this summer a “genocidal crime.” This was in turn rebuked as “slander and lies” by Israeli Prime Minister Benjamin Netanyahu, who responded from the same UN podium with accusations that the Palestinian resistance is a carbon copy of the Islamic State extremists in Iraq and Syria. Another round in the war involved statements by chief Palestinian negotiator Saeb Erekat comparing Netanyahu to Abu Bakr al-Baghdadi, the extremist, self-appointed caliph of the so-called Islamic State.

To be accurate, these words have not been entirely without action. Israel continued to confiscate Palestinian lands in the West Bank, including East Jerusalem, prompting PLO official Hanan Ashrawi to say that Israel is “committed more to land theft than to peacemaking.”

The Palestinian side has yet to publicly threaten to go to the International Criminal Court (ICC) if its current efforts at recognition of a Palestinian state at the UN Security Council end with a US veto. The Palestinian delegation was said to have been divided on the issue in regard to the UN speech, and Abbas chose in the end not to mention the ICC to avoid angering the United States, which appears to have threatened to cut off $700 million in aid to the Palestinians. The Gaza reconstruction conference, scheduled to be held this month in Cairo, also seems to have played into Abbas’ decision.

Irrespective of words and actions, a change in direction by the Palestinian leadership is clear. The days of goodwill gestures toward Israel and hosting Israeli academics and students at Palestinian Authority headquarters are over. Palestinians have given up on changing Israeli public opinion or expecting the nonexistent Israeli peace camp to produce enough political pressure to attain peace.

The ratcheting up of language and threatening to take action in international circles will do very little, however, to end 47 years of occupation. Israel’s occupation has created a dependency that is extremely difficult to overcome. Palestinians depend on Israel for water, fuel and basic products as well as cell phone connections. In short, Israel controls the land, everything beneath the land and the airspace.

Short of committing to violent resistance, which Abbas opposes, Palestinian policy toward Israel will require a lot of creativity. Nadim Shehadi, an associate fellow at Chatham House, says that a reversal of the current process — which since the Oslo Accord has focused on negotiations to reach a final status agreement — is needed. Speaking to Al-Monitor from London, Shehadi said that the focus of the peace process is currently based on the concept of “nothing is agreed to until everything is agreed,” but this has become a trap that must be bypassed.

Shehadi, who has been active for 10 years in Track II diplomacy, prefers what he calls the two-state option but without a focus on borders and sovereignty. “Borders and sovereignty are overrated these days,” he said, pointing to various state models that are collapsing in the region and the world. So many countries have border problems, and in today’s interconnected world, he said, “No nation is totally sovereign.”

Shehadi says that since President Barack Obama and Netanyahu are on record as agreeing to the two-state solution, Palestinians should jump on that and accept the concept. “Over 20 years, we have accumulated an enormous amount of knowledge that can help in working out the details of how to resolve the differences between these two states.” Shehadi believes that trying to reach a final status agreement that will include an immediate move of hundreds of thousands of Israelis will not work, because no Israeli leader could ever agree to it. “This is why the Kerry mission was doomed. Because it attempted to do what was nearly impossible,” he said.

Shehadi believes that the way to finesse this issue, to move the process along, is by leveraging the US veto. “Palestinian leaders can try and negotiate a withdrawal of the current Security Council resolution in return for a general recognition by both the US and Israel of the State of Palestine,” he argued. “Then let the details be worked out at a later stage.”

Shehadi considers the ICC option a “waste of time” and is skeptical about the idea of “suspending security cooperation” with the Israelis. The Chatham House fellow believes instead that bringing in the Arab and Islamic component through the Arab Peace Initiative would provide muscle to the process at a time when even Israeli officials are discussing involving Arab countries in the peace process.

There is no doubt that we are on the verge of a major change of direction in the Palestinian-Israeli conflict. Obama’s statement that the status quo is “not sustainable” points to the requirement of creative and new thinking. Trying to assuage the Israelis by putting their security fears at ease has been shattered by the war on Gaza and its repercussions. At the same time, the idea of a total divorce from Israel is not easily attainable considering the current balance of forces. A creative new direction is needed to break the logjam and provide badly needed hope to a depressed Palestinian society that has lost faith in peacemaking.