US aid to the Palestinians represents an ongoing effort to deny them access to the United Nations and thus statehood. 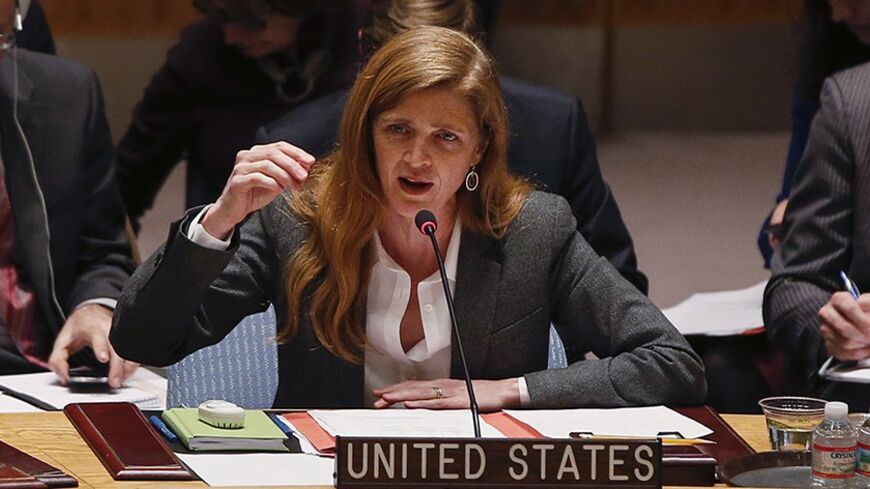 US Ambassador to the United Nations Samantha Power speaks during a Security Council meeting on the crisis in Ukraine, at the UN headquarters in New York, March 3, 2014. - REUTERS/Shannon Stapleton

The steps taken by Mahmoud Abbas for Palestine to join 15 UN bodies has elicted reactions from several members of the US Congress and, of particular note, from the US ambassador to the United Nations, where reason appears to have been dethroned.

Ambassador Samantha Power told a House of Representatives subcommittee on April 2, “The United States will stand with Israel, we will defend it, and we will challenge every instance of unfair treatment throughout the UN system. … This solemn commitment also extends to a firm opposition to any and all unilateral actions in the international arena, including on Palestinian statehood, that circumvent or prejudge the very outcomes that can only come about through a negotiated settlement.” Is it not possible that they could come through the United Nations if the current Palestinian-Israeli negotiations fail, as they have to this point? Have there been negotiations in a real or legal sense?

Power’s declaration, whose intent is to deny the Palestine Liberation Organization and others their right to access the United Nations as the anchor of international law, is a threat to all UN members who are and have been committed to upholding the rights of the Palestinian people, as they have done for others in the past by acknowledging their liberation movements in their efforts toward independence and statehood.

This preemptive strike was delivered by Power in a newly found threatening tone. Her declaration to “challenge every instance of unfair treatment” raises one question: What is unfair? It is Israel with its ongoing, creeping annexations of Palestinian territories. It is Israel refusing to acknowledge that it is an occupying power. It is Israel on the eve of a visit by Secretary of State John Kerry announcing the building of 700 new housing units in East Jerusalem, greatly reducing the territory of what was intended to be the capital of Palestine should the so-called negotiations of more than 20 years remain under the exclusive management of the United States. Threatening to disallow the Palestinians access to routes to independence outside the context of US sponsorship is mind-boggling.

One must ask, how much longer can the Palestinians wait for the United States to persuade Israel to respond to the their legitimate rights? How much longer should the Palestinians have refrained from taking action in response to Israel’s preemptive veto against the Palestinians’ right to enable the mechanisms of the United Nations to obtain statehood, independence, and sovereignty in the same manner that the UN General Assembly in November 1947 enabled Israel as a state in Palestine?

It is high time for a clear response to Power, who also told the House panel that she “will oppose any attempt to upgrade the status of Palestinians everywhere in the UN.” She further revealed that a “newly formed American-Israeli team meets monthly to discuss and coordinate responses to possible unilateral action by the Palestinians at the UN” and has warned that “if the Palestinians go to the ICC [International Criminal Court] it will be a profound threat to Israel and devastating to the peace process.” On this last point, the question to Power is: Why? Worried about the outcome of a decision? Abbas has not made a statement on the ICC, but suppose the Palestinians did approach the court? Why would this be “devastating”?

Ambassador Power should know that the “peace process” since the Oslo agreement (and even before that) has been “devastating” to the Palestinian quest for peace, independence and human rights. The Palestinian people have experienced the humiliation of conquest and have tired of the promises advertised by the process and the hopelessness of being denied the right of self-determination.

In this instance, one might be compelled to ask the following: If the United Nations can provide breathing room for achieving Palestinian national and human rights within the framework of international law and activating hundreds upon hundreds of UN resolutions recognizing their rights, would the United States oppose it? I don’t think so. Power’s preemptive strike to deny Palestinians’ access to UN agencies to secure breathing space and ameliorate their collective frustration should not be taken as an indication that because of the special relationship between the United States and Israel, the pressure will continue to be accommodating to Israeli demands.

Even if the executive branch of the US government wants to help in bringing the national rights of the Palestinians to fruition, the chances of this being stifled are quite high, as they always have been, with successive Congresses guaranteeing support for Israel and facilitating its getting away with the continuing proliferation of settlements in the occupied territories. The nearly $500 million that the United States appropriates for the Palestinian Authority (PA) led Rep. Kay Granger, R-Texas, to assert to Al-Monitor that this assistance be revisited. She contended that the Palestinians’ approaching the United Nations was antithetical to the goal of US assistance since the 1990s — to strike a deal for peace. While US assistance has been welcomed and represents an expression of the United States’ generosity, since the early 1990s there has been no peace deal! Rep. Nita Lowey, D-N.Y., Granger’s Democratic counterpart, said that she was “extremely disappointed” with Abbas’ action. Why? Probably because of the reasons expressed by her colleague Granger.

During the committee session that Power attended it was emphasized that current US law contains several restrictions on aid to the Palestinians, including requiring the PA to battle against incitement toward Israel and to refrain from dragging Israel before the ICC and joining UN agencies. In other words, providing $500 million to the PA seems to represent an ongoing attempt to prevent Palestinians from exercising their right to access the United Nations and to further delay, as every year since 1993 has proven, that US aid has become an alternative to Palestinian national rights and an independent state.

The people of Palestine are exhausted by the discourse of the so-called peace process. While they appreciate Kerry’s enthusiasm and visits, they are beginning to recognize the futility of this endeavor of more than 20 years, as he offers the substance of the same old terms of reference used throughout the process.

The only way out for the Palestinians is through the organization that has helped many other people who have experienced occupation, disfranchisement and colonial indignities to achieve their sovereign prerogatives. They feel the time has come for their legal, moral and historical assets to lead to the fulfillment of the vision of an independent state of Palestine, in peace with all its neighbors.

To Power, I would say, your enthusiasm to strike at any effort by Palestine to access its rightful seats in the UN General Assembly and various specialized agencies, as it has in UNESCO, is not only disappointing, but also wrong.