In an interview with Al-Monitor, President of the Manufacturers Organization of Israel Shraga Brosh says that the BDS movement against settlement products hurts first and foremost Palestinian workers. 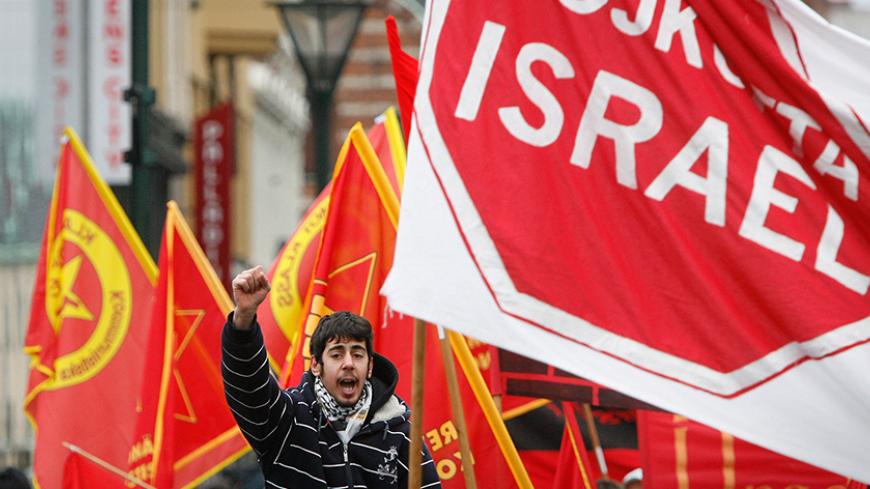 A protester chants slogans near a banner reading "Boycott Israel" during an anti-Israel march in Malmo, Sweden, March 7, 2009. - REUTERS/Bob Strong

The economic cost that Israel is paying for the current wave of terror can be seen in how the malls have emptied out. The consumers are not only scared to shop there, they aren’t in the mood to shop. Just like after every outbreak of violence, statistics will soon be released to back up these observations. “Add the fact that certain countries already boycott us for political and ideological reasons, and the negative impact on the economy could be very significant,” said Shraga Brosh, president of the Manufacturers Association of Israel. In an interview with Al-Monitor, he calls on the government to include businesspeople in the country’s official public diplomacy campaign overseas, claiming that this tactic already proved itself during the first and second intifadas.

Brosh is also owner of a factory that produces synthetic fibers. Situated in the Barkan Industrial Zone in Samaria, the plant employs dozens of Palestinians. So far, work there has continued as normal, he said. That’s what happens when there are economic incentives and families to support: Politics gets pushed aside.

The text of the interview with Brosh follows:

Al-Monitor:  Can we already estimate the impact that this wave of terror is having on the economy?

Brosh:  Of course it exists, by every parameter. It can be seen in our exports to the [Palestinian] Authority in the West Bank, in the decline in tourism and in our local consumption, which is also declining because people tend to frequent crowded places less. To all of this we should add the fact that our export engine has slowed down, meaning that the situation could get even worse. It is awful to see all the stabbings and riots, but the long-term impact could be even more dramatic. Then we have to add the fact that some countries already boycott us for political and ideological reasons. Given all of that, the economic impact could be very significant.

Al-Monitor:  Do you have figures relating to the impact that the BDS movement [boycott, divestment and sanctions] is having on the Israeli economy?

Brosh:  We don’t know how much the BDS movement has had an impact. The reason is that there are two sides to the boycott: the official BDS movement boycott, in which, for example, a shop in Sweden boycotts us. We know how to handle that through our embassy or the various economic ministries because boycotts are illegal. The bigger problem is dealing with boycotts that we don’t know about. So, for example, someone on the board of directors of a company can get up and say, “There’s a problem with Israel,” and then they decide to boycott us, without giving us the reason or even informing anyone that they really are boycotting Israeli goods. In that case, it is not as if some supermarket made a point of removing a specific product. They simply made a decision not to buy goods from an Israeli supplier.

I am very glad that our exports focus more on technology and innovation. We have to continue focusing on that, because then companies who refuse to buy from us end up losing out. They don’t buy from us because they like us. They buy from us because they think our products are the best, that they are the most technologically advanced and of the highest quality. Most of what we sell is not the end product that appears on the shelf. For the most part, it is the technology. So, for example, our exports in the auto industry come to over $1 billion in sales, which all boils down to a tiny computer in the car’s engine. That is why we must make it impossible for them to forego our products.

We must continue investing everything we can in innovation, while at the same time waging a public diplomacy campaign. Ultimately, an economic public diplomacy campaign led by businesspeople, who meet with their peers overseas, can bring about change. After all, what do we have to do with politics? We make a good product, we’re not against peace and we’re not opposed to the Palestinians. We just want to live in peace. These personal encounters are excellent. We had meetings like that during the first intifada. We sent delegations of three or four businesspeople to various world capitals. They spent two or three days in each city, met with the editorial boards of the local newspapers, gave interviews, relayed a message about a spirit and willingness of acting, and met with economic ministers.

Brosh:  No, absolutely not. I am just talking about our ability to influence. I don’t always know who is boycotting me, but I do know that I must be at the front in the public diplomacy war. Furthermore, we are always going abroad, so use us. There should be no shame in repeating what already proved to be successful in the past. We used to have this type of commercial ambassadors. Before anyone of us ever went overseas, we would call the Israeli ambassador in that country. We would ask him if he needed help and whether he could arrange us a newspaper interview or a meeting.

People say that the Palestinians have the best public diplomacy in the world. That is because it was built up slowly, piece by piece. We have to do things that won’t cost us money. We have to rebrand Israel internationally as a country based on technological excellence. That way, they won’t just associate us with intifadas and the killings.

Al-Monitor:  How interconnected are the Israeli and Palestinian economies?

Brosh:  The Palestinian economy is dependent on us. They don’t manufacture a lot there. They do, however, buy a lot from us, including food and other consumer goods, at a cost of about $4 billion per year. While they have some industry, it is not on the same level as ours. The same is true with jobs. Tens of thousands of Palestinians work here, and we want them to continue working here, because the more they work here, the more they have to lose. That means that they will want less violence and fewer wars. Obviously, I don’t want to be the one putting a stranglehold on them so that they stay here, but we do share a common interest. If they make their living here, then we get to know one another. Not everyone there is a murderer, just like not everyone here is a murderer. It’s just a minority on their side, just like it’s a minority on our side. So let’s meet the majority, instead of the minority. And you meet the majority in the workplace.

Al-Monitor:  You employ Palestinians in your factory in Samaria. Has the work there suffered because of the current wave of terrorism?

Brosh:  I have dozens of Palestinian workers. We feel great together. We appreciate each other. The Palestinians who work for me earn as much as Israelis do. I have a manager from the Palestinian Authority who earns more than 18,000 shekels [about $4,600 per month]. They’re part of the family. They’ve been working with me for years. It’s not like they started working here today. I can’t say that the mood is good right now, because no one knows what each day will bring. On the other hand, based on having already experienced two intifadas, I can say that we haven’t had any violence here. Everything has operated as usual. They all came to work as usual. I come from a right-wing home. I am not a leftist, and yet I say that they want the exact same thing that we do. They just want to live. If, God forbid, everything grinds to a halt, it would only intensify the violence.

Al-Monitor:  To what degree is the current economic situation a consequence of the policies set by our leadership?

Brosh:  I don’t want to blame our government, or their government either for that matter, but it is perfectly obvious that a situation in which people here could lead a normal life would result in significant development in this region. Ostensibly, companies boycott us because we mistreat the Palestinians. So, for example, a Swedish company removed its lock factory from the Barkan Industrial Zone because the board of directors decided that it did not want to have a factory there. I went to the Swedes and asked them, “Who exactly are you punishing? The factory relocated to within the Green Line, but 400 Palestinians lost their jobs. What exactly did you do? Who did you hurt?” That is why there is a lot of hypocrisy in these boycotts. Naively, I actually went to Sweden to see what I could do about the situation, but it really made no sense because all they wanted was to show that they were pulling a factory out of the territories. There is no doubt that the state should strive to establish normal relations [with the Palestinians]. Obviously, the utopian situation would be peace, but I don’t dare say that word anymore.

Al-Monitor:  Do you have any contact with Palestinian businesspeople?

Brosh:  All the time, and they are just as committed [to normalization] as us. Take me for example. I’ve maintained contact with them for 15 years now, and they all want the same thing, but in the end, politics wins. That’s because here I can say whatever I want, even if the prime minister doesn’t like it, but people don’t talk that way there. Someone from the Palestinian Authority can sit in a room with us and even agree with us. The problem is that neither he nor I are the ones to reach a peace agreement. Still, we always think that economic relations with our peers could create a much better atmosphere here, so we don’t give up.