Some Iranians still dream of citizenship

Up to a million people born to Iranian mothers and non-Iranian fathers continue to be deprived of Iranian citizenship. 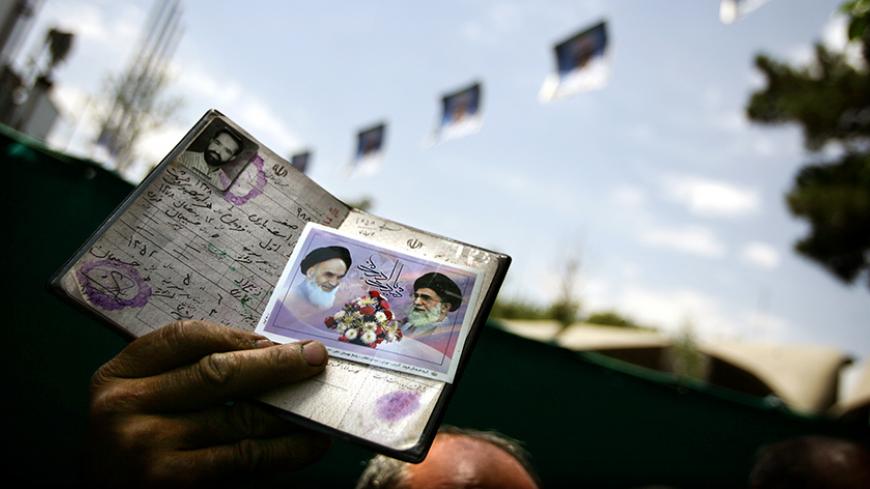 An Iranian man holds his passport as he waits to vote in the Iranian presidential election outside Tehran University, June 17, 2005. - REUTERS/Damir Sagolj

TEHRAN, Iran — In Iran, lawmakers have acted to vote against a bill that would grant citizenship to the children of Iranian mothers and non-Iranian fathers. This dampens the hopes of hundreds of thousands of people who have been deprived of their social rights because their fathers are not Iranian.

The citizenship bill, put forward by 49 signatories, was first presented to parliament’s presiding board. At an open session Sept. 20, its double urgency was approved, with 140 votes in favor and 36 against. The double urgency designation meant that it had to be put to a final vote in less than a week. The most important part of the 12-article bill was its first article, which states: “The children of marriages between Iranian women and foreign men, or men who have no nationality but have been/will be born in Iran, may be granted citizenship after reaching the age of 18 if they have resided in Iran for five consecutive years prior to making their citizenship request.”

Between 400,000 and 1 million people in Iran are estimated to lack Iranian nationality despite having an Iranian mother. The majority of these individuals were born out of so-called “temporary marriages,” known as mut’ah in Arabic and sigheh in Persian, between Iranian women and Afghan men. These men took refuge in Iran either after the Soviet occupation of Afghanistan in the 1980s, or following the Afghan civil war in the 1990s or the US-led invasion in 2001.

Mehrangiz Kar, a prominent Iranian lawyer and women’s and children’s rights activist who has faced arrest and imprisonment for her activities, told Al-Monitor: “These children and youths are deprived of educational and health facilities as well as other services that Iranian citizens benefit from, such as subsidies and the like. In a word, they have no civil rights and lack identity documents or a birth certificate.”

While the citizenship bill initially received a positive response from a plurality of Iranian lawmakers, increasing the likelihood that it would be passed in its entirety, things took a turn on voting day. Then, only 74 MPs voted in favor, and the measure was ultimately rejected with 84 votes against and 12 abstentions.

Kar, the recipient of numerous international awards, told Al-Monitor that those opposed to the plan give two reasons for their stance: “It would encourage immigration and pose dangers to the country’s national, political and social security.”

President Hassan Rouhani won the 2013 presidential election thanks to the backing of women, civil society activists and supporters of equal rights. Yet, one of the main opponents of the bill was the Rouhani administration’s deputy interior minister. Voicing his ministry’s opposition to the citizenship bill, Deputy Interior Minister Hossein Ali Amiri even delivered a speech on the day the measure was put to a vote. Amiri emphasized the many difficulties such a law would create for the government if approved, while pointing out the high number of potential migrants from Iran’s neighbors due to the regional situation. “This plan will lead to an increase in immigration and illegal marriages in the country,” he said.

Before Amiri’s speech, Principlist MPs Mohammad Ali Pourmokhtar and Nader Ghazipour also spoke in opposition to the plan. Pourmokhtar’s reasoning was that it is not clear whether those who would be granted citizenship under this plan would have any emotional attachment to Iran. Meanwhile, Ghazipour challenged the “political and security” consequences of such a measure, arguing that “Iran should remain Iranian and we should not let a non-Iranian take part in elections. We must preserve Iran’s holiness.”

Kar criticized this kind of mentality and said Iran’s political system and legislative bodies should pay attention to one basic fact: “The human rights of a mother and a child are an independent issue that can only be analyzed through the foundations of human rights, and we cannot punish abandoned mothers and children in order to make up for the long-term mistakes of a political system.”

Zainab Azimi, a 29-year-old who lives in Harandi, a poor neighborhood in the capital Tehran inhabited by many Afghan families, is an Iranian woman who married an Afghan man in 2010. Together, they have a daughter who lacks a birth certificate. She told Al-Monitor: “Am I not Iranian? Am I not a Muslim? Why should my child not have a birth certificate?” Zainab said many residents in Harandi had learned about the initial approval of the double-urgency citizenship bill, and that almost everyone was ready to celebrate: “Lord knows, it was as if they had given us the world. We were very happy that our kids would grow up without being concerned about their identity documents.” However, she said that upon hearing that the bill had not received enough votes, “I felt like they had poured cold water over my head.”

Zainab now wants to try illegal ways of getting her child identity documents: “There is a person in Iran’s National Organization for Civil Registration who for 50 million rials ($1,669) can come up with a birth certificate. Right now, we don’t have the money. But with God’s help, we will save up and do this.”

Maryam, 19, also a resident of Harandi, is the child of an Iranian mother and an Afghan father. She told Al-Monitor that not having a birth certificate has not only deprived her of an education, but also turned into a big obstacle for her to get married: “I had an Iranian suitor who liked me a lot. I liked him a lot, too. But the notary public said that I couldn’t get a marriage license because I don’t have an Iranian birth certificate, and that we had to go to Afghanistan to get married. So the young man left me.”

The rejection of the proposed citizenship plan has not only resulted in the nationality status of hundreds of thousands of Iranian-Afghan children being left in limbo. It has also sparked criticism at a deeper level, in relation to how women are seen and their role in Iranian society. Kar said, “Gender discrimination in citizenship laws becomes evident in places where, as a result of Article 976 in the civil law, blood linkage is only realized through the father, and maternal linkage has no effect.”