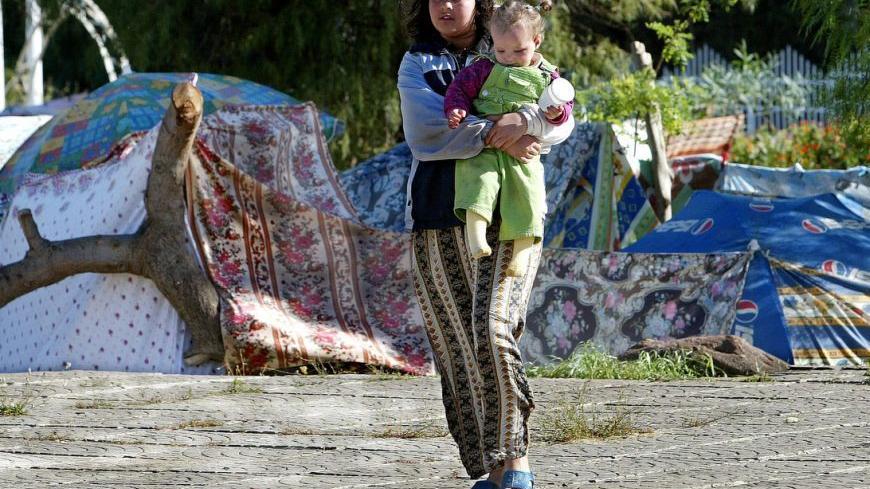 An Algerian girl holding a baby walks in the Algerian town of Boumerdes. - REUTERS

Zawaj mu'aqqat (temporary marriage), commonly known as pleasure marriage or nikah mut’ah marriage, is a concept that is not new in the jargon of jihadist Islamists who believe they are fighting for the cause of Allah. They also suppose that they have the right to the carnal enjoyment of young girls considered to be booty.

Algerian human rights activists have been denouncing the pleasure marriages allowed in Salafist circles. Lawyer Amar Zaidi told Al-Monitor, “Women deserve their freedom and their right to choose the man who suits them. Marrying a woman by force or using her as a means of pleasure is immoral and no modern society should accept this. None of us must turn blind eye to this growing phenomenon. Women are suffering from being used for sex acts."

The private and verbal temporary marriage between a man and an unmarried woman is often contracted forcibly as opposed to on the basis of mutual acceptance. In many cases the groom does not need to get the approval of the bride.

Also, the marriage contract does not require having witnesses, a written contract or permission from a country’s legal authorities.

In most cases, the length of the contract and the amount of consideration are unspecified.

Algeria was the first Arab country to experience the phenomenon of forced “marriage” on this scale. More than 1,600 cases of sexual assault have been reported since 1993, according to the government’s figures.

When abduction of women appeared as a new form of violence, the situation became tense and nobody could turn blind eye; the phenomenon obliged the country’s authorities to authorize abortion in April 2004 in spite of its noncompliance with the country’s laws.

Abduction of girls was occurring in each attack in which terrorists took everything they could find, and the girls were part of the loot. Abducted girls were called sabaya, which means "the youngest and most beautiful girls."

Only an emir (the top leader of jihadist groups) has the right to have sex with the women.

A large number of the women’s lives were further complicated when they became pregnant and gave birth out of legal wedlock. They have faced tremendous legal and other problems in their attempts to reintegrate into society.

Even though Article 2 of the Algerian Constitution enshrines Islam as the state religion that provides the society with its central social and cultural identity and gives most individuals their basic ethical and attitudinal orientation, Islam’s absolute application conflicts with unfortunate social realities in regard to the matter of abortion.

Section 304 of the penal code states that whoever obtains or attempts to procure the miscarriage of a pregnant woman can get a 10- to 20-year prison sentence. Still, women who become pregnant during their abductions are allowed to have abortions.

Many women were raped in their homes or even while they were on the street.

In the jihadist philosophy, the husband is never financially responsible for any children resulting from the union. This has given rise to another, more-complicated, problem for Algerian authorities: The so-called "mountain children" born into the families of terrorists who were living outside the law during the 1990s. Their fate continues to be surrounded by an awkward silence, and their cases have become a burden to the Algerian state, caught between legality and religious constraints.

Nadia Bourokba, president of SOS Children Without Borders, told Al-Monitor, “The children are striving to have their own identity. Their confused social and legal situation causes them suffering and they face enormous difficulties to be integrated completely in the society. We deal also with unmarried mothers who are also suffering the impact of negative societal interpretations of their cases. We are helping them to recover their joy and the moral power to be an integral part of the Algerian society.”

Those children born of a union during the "dirty war" with only a reading of the Fatiha — a ritual required by law, but not sufficient for a legal recognition of marriage — lack legal status. There are around 500 of them and their ages range between 3 and 15, according the commission responsible for carrying out the provisions of the Charter for Peace and National Reconciliation.

The government is striving to facilitate their integration into society, but it is a confusing situation. “The integration of these people needs a lot of time because their suffering is so great,” Bourokba said.

The Civil Harmony Act and Charter for Peace and National Reconciliation passed on Sept. 29, 2005, provided amnesty for most crimes committed in the course of the war. It was meant to turn the page on the black decade, but did not address the problem of the mountain children. It focuses on stopping litigation against individuals who have decided to end their terrorist activities and their involvement in terrorist-support networks in Algeria.

This has inspired jihadists leaving for Syria in the fight against President Bashar al-Assad’s army. In Syria, the jihadists have been entering into temporary marriages. Tunisian young women in general and Maghrebians in particular have been enticed to Syria by jihadists and imams, who tell the women they will be the wives of jihadists. The women then become virtual hostages and are offered to al-Qaeda fighters in Syria in order to help put the jihadists into a “state of ecstasy.”

In reality, this type of marriage is not authorized in the Quran, but it is contracted with reference to fatwas emanating from wicked imams.

Abdelaziz Bouchetta, a lawyer who teaches Shariah at the university level, told Al-Monitor, “This type of marriage is immoral and has no legitimacy and authenticity in the Islamic faith. There's no doubt that in … Islam this relationship has no ethical foundation.” Supporters of this idea believe that mut'ah cannot be compared to drinking intoxicants and justify the authorization of temporary marriage to satisfy the carnal desires of the jihadists.