Algeria's security services are reaching out to neighboring countries in an effort to thwart Jabhat al-Nusra's recruitment of young people for jihad in Syria. 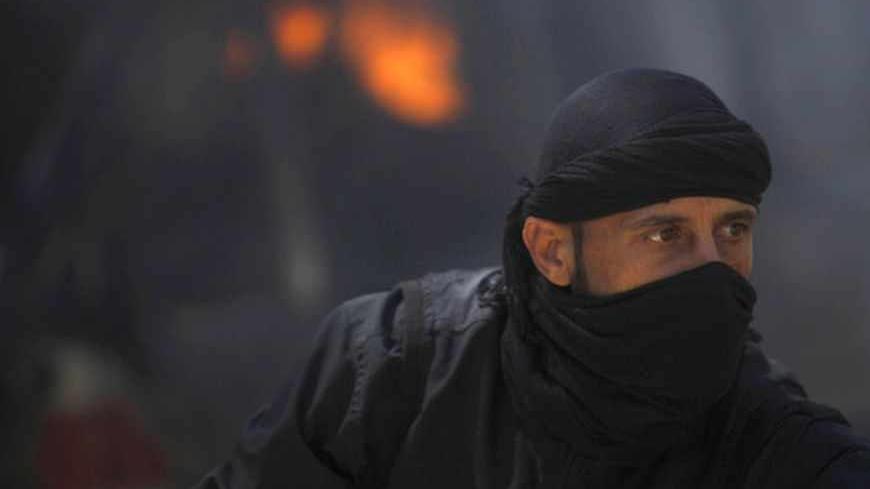 A fighter from the Islamist Syrian rebel group Jabhat al-Nusra is seen in front of a burning vehicle in Raqqa province, eastern Syria, May 12, 2013. - REUTERS/Hamid Khatib

ALGIERS — Algeria continues to maintain pressure on the jihadist recruiting network targeting Maghreb youth to fight in Syria alongside Jabhat al-Nusra against the Syrian regime. Its security services, which have succeeded in dismantling some dormant cells in charge of recruiting Algerians to carry out jihad in what they call the Levant, have had to deal with groups operating in the provinces of Algiers, Ghardaia, Tebessa, Tlemcen, Oued Souf, Djelfa, Tiaret, Biskara, IIlizi and Annaba during the last six months.

Specialists on terrorism in the security services found that some of them are affiliated with the Islamic Salvation Army (AIS). This terrorist organization that was an armed wing of the FIS (Islamic Salvation Front) and dissolved on Jan. 1, 2000, was presumed to have some remaining members active in the recruitment of unemployed young people.

The group has an active role in the armed conflict between the Algerian government and various Islamist rebel groups that began in 1991 following the annulled legislative elections.

The enrollment of Algerians to fight under the banner of Jabhat al-Nusra, which declared its allegiance to al-Qaeda in Iraq, is not new. Algerian fighters with solid experience in Afghanistan went to Iraq during the first war to fight against American army and stand by the Iraqi regime in its resistance against the coalition. In 2003, during the second war, Algerian jihadists came back in large numbers to sacrifice themselves in what they believe to be a “holy war" against what they consider to be crusaders. So far, Algerian authorities have identified 30 Algerian jihadists killed in Syria.

It is possible that there are others who remain anonymous. The country's authorities consider them "forgotten." The war in Syria has revived the dormant cells that organized the entry of jihadists in Syria through Turkish territories they reached from Libya.

In that country neighboring Algeria, they are trained to conduct terrorist attacks before entering the Turkish territories en route to Syria as the Muhajireen Brigade.

But with the dismantling of the networks that recruit Algerians by using religious discourse and hadiths about the advantages of jihad in the Levant to persuade young people to go to Syria, the number of the jihadists is significantly decreasing.

“In fact, the phenomenon of migration of Algerian jihadists to the Middle East is far from being new," Benjelloul Hazarchi, a political analyst, told Al-Monitor. "It dates back to the 90s, when young Islamists went to Iraq to fight against US forces. In 2003, other waves of jihadists went to fight in Iraq alongside the Iraqi army in its war against the allies. With respect, therefore, the jihadists who go to fight in Syria like the Moroccan, Tunisian and Libyan, they are mostly young. They have a misconception about the meaning of jihad, which is not legal when it comes to fighting a Muslim.”

“Nowadays, there are always Algerian jihadists who continue to languish in Iraqi prisons, and negotiations for their release are underway. This notion of recruiting jihadists is condemned by both Algerian civil society and by security services that are monitoring very closely the suspects involved in the recruitment of youth to fight alongside Jabhat al-Nusra, which is engaged in the war against the regular army of Syria,” he added.

"The organizations that are in charge of recruiting Algerians and Maghreb youth use religious discourse and the hadith about the benefits of jihad in the Levant to try to convince young people to go to Syria. They take advantage of their weakness in understanding the holy Quran,” Hazarchi stated.

To carry out successfully a strategy to contain this phenomenon, coordination between the Algerian, Libyan and Tunisian security services is highly necessary. That is what these countries’ leaders are aiming to reach in their different ties.

“What makes this so-called holy war legitimate is the fact that the Alawite Shiite regime is considered among Sunni as an apostate. That is why Algerian youth, missing a true knowledge of the precepts of Islam because of their low level of education, adhere easily and naively to this jihadist logic,” Idriss Rebouh, spokesman for the Islamic party Front for Change, told Al-Monitor.

“There is also a very disquieting phenomenon. It links to the level of training of imams who are not academics. Their comprehension of Islam is considerably weak and its impact on the followers is really dangerous as they are disoriented in the wrong way,” Rebouh added.

“This misunderstanding of Islamic precepts leads to the emergence of a new phenomenon [called] 'Annikah marriage.' Unfathomable networks with even more obscure funding sources persuaded young women from Tunisia, Morocco and elsewhere to engage in temporary marriages. Some of them came back to their countries pregnant and they are considered as mujahidat [women mujahideen]. The religious authorities must not have a blind eye on this dangerous phenomenon which is taking serious proportions,” Rebouh concluded.