Terror Attack in Algeria Thwarted, But More May Come

After the assassination of a Tunisian opposition figure, and a recently thwarted attack near its border with Tunisia, terror attacks are more likely in Algeria, writes Kaci Racelma. 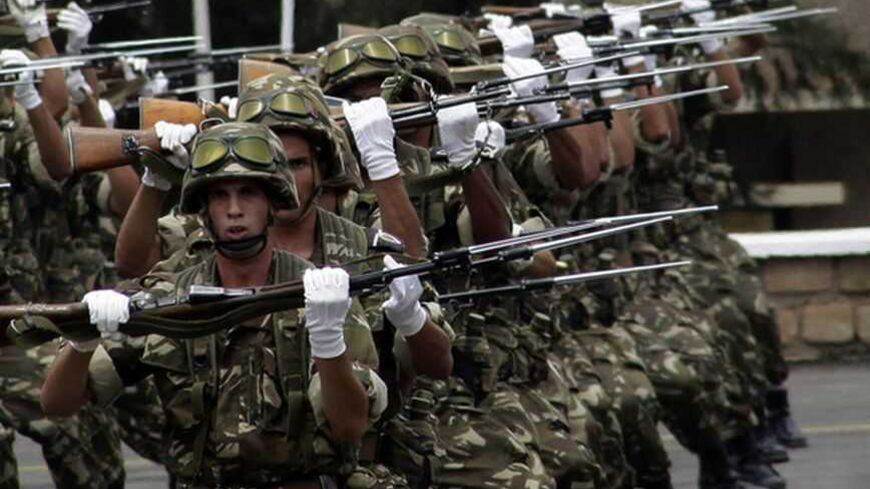 Trainees army officers from the 40th class march during their graduation ceremony at a Military Academy in Cherchell 90 km (56 miles) west of Algiers, June 27, 2012. - REUTERS/Ramzi Boudina

During the night of Monday-Tuesday Feb. 4-5, 2013, elements of the People’s National Army (ANP) repelled an armed terrorist group that was about to break into the military barracks in Jebel Boudoukhane, in the southern province of Khenchela, Algeria, near the Tunisian border.

The terrorists used machine guns and RPGs and were dressed in military uniforms so as not to arouse suspicion. They set up a false checkpoint near the target location and intercepted the truck that supplied the military barracks with food. They took hostage the truck’s driver and loader and drove the truck to Boudoukhane barracks to try to sneak in. The soldiers, however, realized what was going on and counterattacked. One terrorist was killed and several soldiers injured in the firefight. Those attackers who managed to escape were hunted down by the military reinforcements that came from neighboring areas to comb through the surrounding mountains.

The attack on the barracks happened during a tense security atmosphere in Tunisia and the Sahel region. The Algerian-Tunisian border has in recent months been the site of several terrorist attempts, which were thwarted by the heavily-present Algerian security services. Security observers say that the attack was intended for publicity as well as to try to obtain weapons for other groups operating in the Sahel.

Al-Qaeda in the Islamic Maghreb (AQIM) has several branches operating in different parts of the country. The failed attack against the military barracks in Jebel Boudoukhane was conducted by AQIM’s eastern branch, whose chief is Abdelmalek Droukdal, aka Abdelwadoud Abou Mossaab. The military barracks served as an outpost for the ANP in its fight against the myriad Islamic groups roaming Algeria’s eastern regions.

The fight has become more confusing and complicated ever since the Salafist Group for Preaching and Combat (GSPC) swore allegiance to al-Qaeda and changed its name to al-Qaeda in the Islamic Maghreb. A significant mobilization of human and material resources are necessary to win the fight.

Moreover, the security situation in neighboring Tunisia has become precarious with the Islamists’ rise and the escalation of violence after from the assassination of opposition and leftist secular leader Chokri Belaid. Police stations have been attacked and the offices of Ennahda, which holds the parliamentary majority, have been ransacked. The situation in Tunisia may take a turn for the worse, which is worrying the security services in neighboring Libya and Algeria.

The link between Algerian and Tunisian groups and the fact that they are sharing experience have caused the ANP to raise its level of vigilance to deal with two distinct situations: the terrorist threat and the threat posed by weapons and drug dealers, which threaten the region that lies east of Algeria.

Algeria is monitoring vital installations and is trying to prevent terrorist infiltrations from Tunisia, whether terrorists are trying to escape from the security services. There is a high risk of terrorism in Algeria, whose security services are trying to contain arms traffickers and emerging criminal networks. Containing arms trafficking from the south, as well as from Tunisia and Libya, is crucial and requires that the military have better intelligence about future attacks.

Ever since the Libya events that brought down Col. Moammar Gadhafi, the El-Oued–Tebessa–Khenchela triangle has become the site to which various armed groups seek refuge from army units that have become experienced at tracking them. That experience was gained through the merciless fight against extremists for many years.