A growing terrorist threat is forcing Tunisia and Algeria to cooperate in their anti-terror efforts, reports Kaci Racelma. 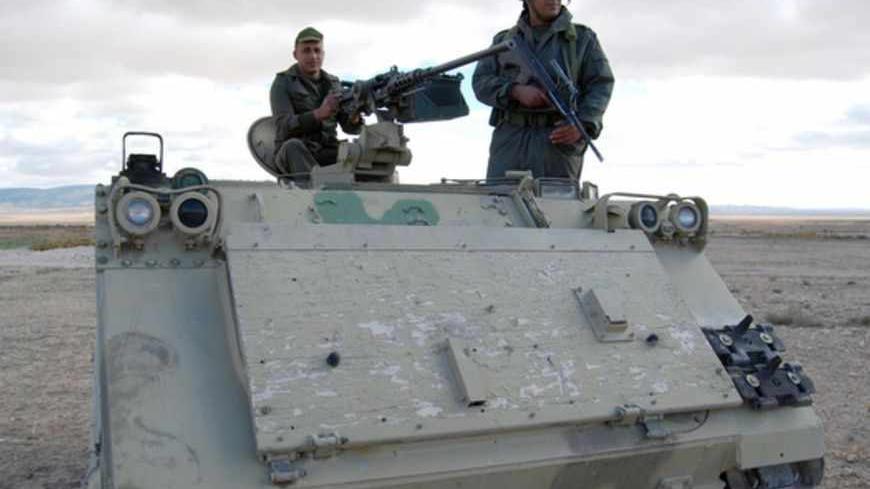 Tunisian soldiers stand on their tank as they take part in a search operation for gunmen in Dernaya Mountains in the Kasserine region, near the Algerian border, on Dec. 11, 2012. - ABDERRAZEK KHLIFI/AFP/Getty Images

Fighting terrorism is a top priority for the governments of the Arab Maghreb Union, especially Algeria and Tunisia, so the two neighboring countries are coordinating their efforts. The international situation, the crises in Mali and Libya and insecurity in parts of Tunisia — particularly in Kasserine and Jebel Chaambi — are worrying both Algeria and Tunisia, necessitating a one-day official visit by Tunisian Prime Minister Ali Laarayedh to Algeria on Monday, April 30.

“The security of Algeria and Tunisia is a common concern,” said Laarayedh when he arrived at Algeria’s capital, Algiers, justifying the cooperation of two states with a common goal: to end the terrorism long afflicting the area.

Algeria has been fighting terrorism for more than a decade, which makes it an important country in the security sphere. Algeria’s security services are often consulted by its eastern neighbor, which is struggling to defeat the armed terrorist groups operating in Kasserine.

Recently, a grave incident happened in west Tunisia near the border with Algeria. A mine explosion seriously injured two security guards as they tried to arrest terrorists.

Political will is not lacking. Laarayedh spoke of “a mutual desire by both countries to promote their relations in all fields, including the economy, energy industry and security.” It is a rapprochement paved by security cooperation, which has become complicated for both countries, particularly after the fall of former Libyan President Moammar Gadhafi.

“Algeria’s security is Tunisia’s security. It is a common issue that requires convergence to confront the security challenges,” insisted the Algerian host.

Tunisia's problems, particularly those related to politics and security, make cooperation necessary. The Islamists are using violence and terror to impose their vision on Tunisian society. Weapons trafficking is a serious issue for Algeria, which explains the drastic border measures since the beginning of 2013.

A few months ago in Khenchela, in east Algeria, Algerian soldiers were targeted by terrorists, prompting the government to tighten security around major installations in that area. Even if the terrorist threat moves to the southern border, stringent security measures at the eastern borders will still be needed. In that context, the Algerian-Tunisian joint commission will meet before next summer to discuss bilateral cooperation. This is what Laarayedh indicated as he tries to enhance bilateral relations.

Al-Qaeda in the Islamic Maghreb, a terrorist organization that has been getting more attention regionally and internationally, includes Algerian and Tunisian jihadists. The connection between jihadists from these two nationalities is not new; many Tunisian jihadists fought in the ranks of the Armed Islamic Group during the bloody Algerian events of 1994. The fighters from those two countries are bound by a common hatred as they work together under the elusive umbrella organization headquartered in Pakistan.

Al-Qaeda leader Ayman al-Zawahri has always advocated uniting fighters in the Arab Maghreb, something that many of the region’s jihadists favor. Faced with this situation, Tunisia and Algeria must cooperate in order to enhance their technical and logistical capabilities and to get a comprehensive overview of the growing terrorist threat. Tunisian authorities are relying on their neighbors’ experience to emerge victorious from that battle.