Violence in Tunisia Increases As Ennahda Stands By

Islamist extremists in Tunisia are increasingly resorting to violence to implement their ideology, while the Ennahda government is accused of fence-sitting, writes Kaci Racelma. 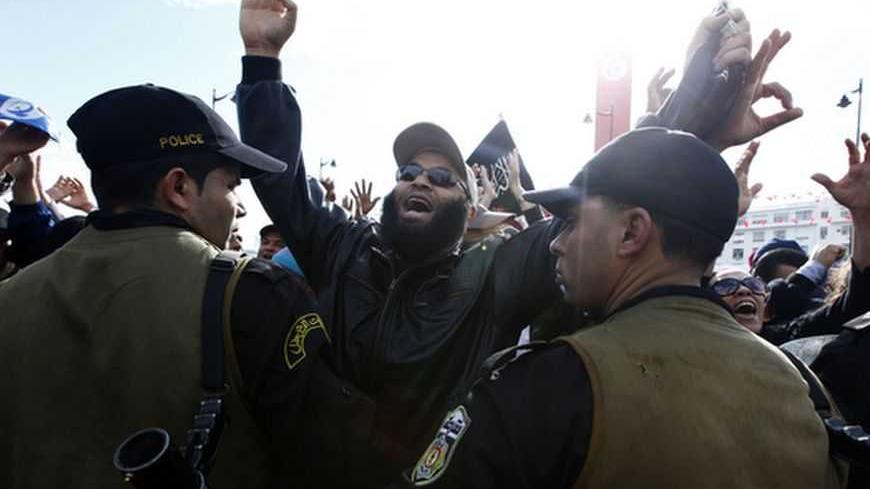 People from the Salafist faction celebrate the second anniversary of the Tunisian Revolution at Avenue Habib Bourguiba in Tunis Jan. 14, 2013. - REUTERS/Anis Mili

A new chapter is opening in Tunisia’s modern history, but not without its share of friction and tension.

These periods of change are inevitably accompanied by pain and upheaval. After the ousting of President Zine El Abidine Ben Ali following massive popular demonstrations, a new vision characterized by religiosity darkened the skies above this North African nation and imposed itself on a people still trying to find its bearings. That new vision is Salafism, and it is ever more apparent that post-revolutionary Tunisia is sinking into Islamism, despite the best efforts of political forces to stop it.

Shaping public opinion through discourse and rigorous communication is central to the ideological arsenal with which preachers garner support in their quest for new followers. Clerics who espouse this approach abound in socially disadvantaged parts of the country.

Poverty creates “a favorable climate for the emergence of organized crime as well as extremist Islamist movements that threaten the stability of the region.” This declaration by Minister of Defense Abdelkerim Zbidi, at the opening of the 30th session of the National Defense Institute (IDN) in November, speaks volumes about the tightening socioeconomic pressures placing the Tunisian people at the mercy of the Islamists' siren songs. In Tunisia, Salafists generally come from disadvantaged social backgrounds and poor neighborhoods. This might explain the vivacity with which they pursue this cause, which, if they had the slightest glimmer of hope of improving their lives, would be of little interest to them.

The “threats posed by both national and regional political and security changes and the means of dealing with them, along with the geopolitical location on the southern edge of the Mediterranean and the Sahel area,” which constituted the focus of the 30th IDN session, left room for only one conclusion, said Zbidi.

“Post-revolutionary anxieties in Tunisia extend beyond its borders.” This paranoia also involves neighboring countries, first among them being Libya, which is equally mired in fundamentalist Islamism.

Islamists in Libya all heed the same call among their groups to obstinately defend the principles of Islam: Ansar al-Sharia. These circles all call for the imposition of Shariah law, resorting to violence against any societal forces that show any sort of resistance. In Tunisia, the first consequences of these political maneuvers were rashly defeated in September of last year, when Islamists attacked private homes and various bars. They did this while turning their nose up at the wishes of the local populations, who had become accustomed to principles of democracy.

In the city of Sidi Bouzid, the birthplace of the revolution, where the allure of Salafism was first kindled, the effects of violence can still be felt throughout a population that does not know to which sheikh it should profess its loyalty. Even though the country made it through the initial stages of democratic transition after free elections were held in October 2011, progress on the economic and social situation has been slow, and 23 years of dictatorship has driven the population to opt for the inevitable, giving the Islamists easy victories at the ballot box.

The Islamist Ennahda government, which claims to be working to improve the situation, is barely able to hold back the instigators of violence. Ansar al-Sharia head Seifallah Ben Hassine, known as Abou Ayad, continues to elude the authorities' attempts to capture him. The government considers itself a utilitarian, having created 85,000 jobs in the public and private sector at the end of 2012, as well as building or renovating 30,000 homes. The Tunisian government kowtows to terrorist violence that has taken root in the Kasserine region. Terrorists find refuge there as an ideal vantage point from which to organize their various attacks against state security.

This past Monday, Jan. 29, two agents of the Tunisian forces confirmed this upsurge of violence. They sustained injuries following clashes with jihadists in Kasserine, in the mid-west of the country, after the army had strengthened its forces in the Sahara close to oil sites to prepare for potential acts of terror. The terrorists seek to make their attacks appear premeditated, mostly through threatening companies that work in their lands.

The Italian company ENI, Franco-British Perenco and Austrian company OMV have all invested here and remain tied to the local government through production-sharing agreements with the Tunisian ETAP and Winstar, a Canadian company.

The experience of those who fought in Afghanistan against the Russians is not to be neglected in the decision-making process. This experience is valued in Islamist circles, which have been successful in training well-known jihadists to fight the Syrian army.

The participation of these experienced individuals at the sides of rebels from the Free Syrian Army has given them considerable credibility within al-Qaeda in the Islamic Maghreb, where they actively participate in jihadist initiatives consistent with the forcible establishment of Shariah law. They are equally engaged in the conquest of northern Mali alongside Ansar Dine and the Movement for Oneness and Jihad in West Africa.

This North African country, whose economy relies primarily on tourism, is opening a new chapter in the emerging Islamic Caliphate.

Kaci Recelma is an Algerian journalist with Inter Press Service news agency and Afrik.com, an online magazine. He covers the North African region.