In the vulnerable southern regions of Algeria, where unemployment rates are soaring, the Committee for the Defense of Unemployed Rights is fighting to keep al-Qaeda from taking advantage of impoverished populations, writes Kaci Racelma. 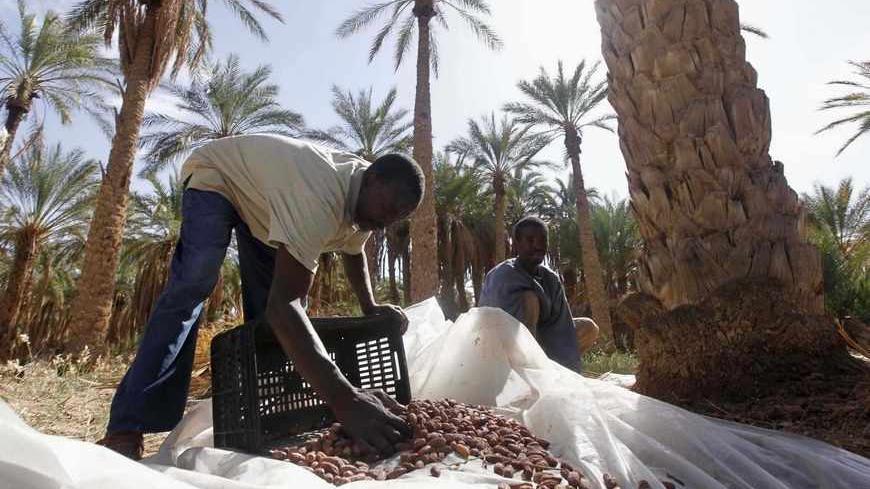 An Algerian farmer sorts dates collected from palm trees during the harvest period at a plantation in Ouargla, 800 km (497 miles) southeast of the capital, Algiers, October 26, 2010. More jobs are being sought for people in Algeria's south. - REUTERS/Louafi Larbi

In the wake of unemployed-worker protests in the south of Algeria  — initiated by the National Committee for the Defense of the Unemployed — al-Qaeda in the Islamic Maghreb strategists are trying to somehow take advantage of the movement and garner sympathy from protesters. However, al-Qaeda’s effort appears to be almost a lost cause because of the unemployed movement’s clear condemnation [of the terrorist organization].

The unemployed defend a cause that comes exclusively from the socioeconomic conditions they have been living under. This is a principle that has nothing to do with the foundations of the ever-looming terrorist firestorm, oriented much more toward jihad and violence. “We, the unemployed of the south, have nothing to do with al-Qaeda or other armed groups, as we are a pacifist movement,” said Taher Belabes, a spokesman for the unemployed, in a statement made public [last] week.

Unemployed workers in southern Algeria have fought for several years to improve their living conditions, beginning with the creation of job opportunities They organized popular marches throughout the month of March to make their voices heard by Algerian authorities.

The government’s position has driven them to sharpen their tone, a situation which Islamists are trying to exploit in order to reinforce their footing among the disillusioned population of the south.

Bendjelloul Hazarchi, a political analyst, writer and resident of the southern Djelfa region, told Al-Monitor:  “The claims of the residents of southern Algeria are completely legitimate. They are socioeconomic and can in no way be confused with the aspirations of al-Qaeda, which is much more violent.”

He added, “The unemployed in the south feel wronged because they live amid rich resources that only benefit people in the north. This has given way to a general discontent, which al-Qaeda looks to take advantage of. However, it is almost a lost cause because the CNDDC (the National Committee for the Defense of the Unemployed) takes a firm position in this regard.”

Still, attempts by terrorist groups and others to take advantage of the jobless movement appear to have helped feed discontent, even among the unemployed in the north.

“Some political movements and Islamists are fomenting resentment among the population. When one part expresses its demands, no matter its origins, they come off as scavengers, seeking sympathy and to establish sway over the disillusioned,” said an unemployed individual from Kabylie who requested anonymity. Kabylie is in the center of the country.

The committee seeking to help the jobless says it is not politically motivated and obstinately refuses to stoop down to terrorists and other political forces. It maintains that its demands are social and can in no way be subjected to politics. Still, the idle status of youth in the southern regions of Algeria has long given terrorist groups — particulary the Salafist Group for Preaching and Combat (GSPC), the predecessor to al-Qaeda in the Islamic Maghreb (AQMI) — the opportunity to reinforce their ranks with “fighters for the cause of Allah.”

On the ground, the CNDDC carries out its mobilization work, waiting to open direct and official dialogue with the government. Economic measures announced with a certain degree of pomp by the authorities have not lulled defenders of the jobless into a false sense of security. Indeed, the measures have been welcomed with some hesitation, particularly regarding concessions involving agricultural operations.

Islamists, who rely on the “inequality” between the population in the north, which it considers “opulent,” and the population in the south, which it sees as “reduced to idleness,” do not seem to be making much ground with youth in the south, who remain determined to endure their difficulties with patience. Hazarchi said, “It is not a question of ceding to the Islamist sirens” who seek the slightest flaw to create a spectacle.