The Arab Al Hosn area in Greater Cairo, known for its history and ancient relics, is being subjected to vandalism and theft by the area’s residents while authorities stand idly by. 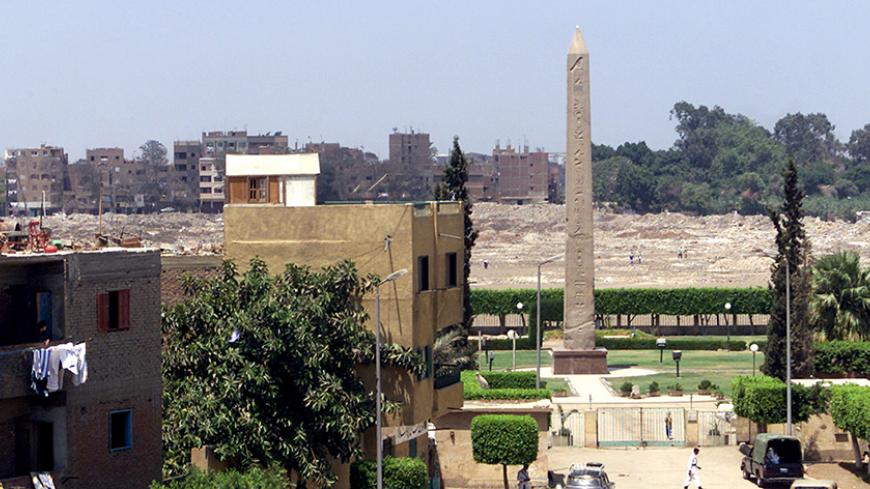 The red granite obelisk of Senusret I towers above the slums of el-Matariya, a squalid suburb in the northern region of Greater Cairo, Aug. 9, 2002. - REUTERS/Aladin Abdel Naby

CAIRO — The Arab Al Hosn area in el-Matariya, in the northern region of Greater Cairo, is an archaeological site that includes the ruins of a temple of the New Kingdom that dates back to the era of the Ramesses kings. The temple was rebuilt by King Ramesses II from the 19th dynasty. Ramesses III, IV, IX and even XI also contributed to the temple.

The temple contains the remains of gates, columns made of papyrus and mud bricks, as well as a fixed gate that belonged to the high priest who was in charge of the temple of the sun in the city of Heliopolis. In addition, the painting of Neb-Ma'at-Ra, the son of King Ramesses IX, with its brightly colored carvings that remain still, is found here.

Despite the historical value of these antiquities, the state is neglecting the site and leaving it at the mercy of drug dealers, thieves and vandalism, as public drilling and excavation works are carried out underneath and in the vicinity of homes in the area.

The obelisk of Senusret I, which dates back to the 12th dynasty, is surrounded by garbage and the slums of the poor, hiding its archaeological features, as dust covers the Pharaonic inscriptions.

In March 2014, the Archaeologist Rebels movement launched a fierce campaign to save the Arab Al Hosn area in el-Matariya, stressing the significance of its relics and calling on officials to save the archaeological site.

He said, “The Ministry of Antiquities deployed guards and inspection patrols following the January 25 Revolution because of the spread of security chaos in the area, in an attempt to prevent theft and the destruction of ruins. Indeed, many tickets were issued against people who violated the laws to this effect.”

Afify added, “The ministry is planning to clean up the area to take advantage of the antiquities that lie in the heart of Cairo, to make it a tourist attraction."

Gharib Sunbul, the chairman of the Ministry of Antiquities’ central administration for maintenance and restoration, said in a press statement Sept. 4 that the administration suspended its work to restore the ruins in Arab Al Hosn given the encroachments on part of the area’s residents. He called upon the governor of Cairo, Galal Said, to assist them in preserving the relics of the Arab Al Hosn area and to remove the garbage at the site.

“The Ministry of Antiquities alone, without the help from the governor and the residents, will not be able to prevent vandalism of antiquities,” Sunbul said in the same statement.

For his part, former head of the Egyptian Antiquities Sector Youssef Khalifa told Al-Monitor, “The problem of the Arab Al Hosn area is the kinds of people who live in the area, as they lack cultural awareness about the significance of the ruins and the need to preserve them, leading to piles of garbage around the relics. The local authorities ought to get rid of the trash accumulated at the site.”

“The second problem is the excavations inside the area and the absence of any restoration operations for the relics that are damaged as a result of moisture and acts of vandalism,” he said.

Khalifa called for a collaboration between the Ministry of Tourism and the Ministry of Antiquities to develop the area into a tourist attraction, to increase national income. He stressed that the acts of vandalism of the ruins in Arab Al Hosn area have increased following the January 25 Revolution and the security chaos that ensued. He suggested the organization of an awareness campaign to educate people on the significance of the site and how to benefit from it as a source of income.

About the idea to move the site’s relics to another location as suggested by the Arab Al Hosn residents, Khalifa said, “Despite acts of vandalism, the ruins cannot be moved as they would lose their historical value [when displayed in] another place, especially as they are part of the ancient city of Heliopolis with its obelisks and temples.”

For her part, Monica Hanna, an Egyptologist at the University of Berlin, said on June 20, 2013, that the Arab Al Hosn area in el-Matariya has been subjected to deliberate acts of vandalism and destruction at the hands of land mafias (in reference to those who encroach on the state’s land) and outlaws. She also said that the gates in the Ramesses temples are being destroyed by those who seek to raze the ruins and temples in order to use the land to develop residential buildings.

She called on all social institutions concerned with the preservation of world heritage sites to work on reviving the glory of the area and to help protect one of the most important cultural heritage sites in Cairo and the world.

In a statement to Al-Monitor, the secretary-general of the Independent Association of Antiquities — which is affiliated with the Egyptian Archaeologists' Syndicate and which was formed by a number of activists and archaeologists — Omar el-Hadry, criticized the Ministry of Antiquities. “The ministry has been lax in dealing with vandals and does not have a plan to deal with the crisis of the archaeological site in the Arab Al Hosn area since before the January 25 Revolution in 2011.”

Hadry added, “The residents of the area are digging up and vandalizing antiquities, as the ministry turns a blind eye to the situation, complaining from a limited allocated budget. Under this pretext, it has been refraining from cleaning up this significant archaeological site with Pharaonic treasures, leaving it exposed to theft, negligence and garbage. The ministry’s officials have long highlighted the importance of these relics, which prompted the residents of the area to strike deals with private excavation companies to dig up and sell relics without any reservation."

Hadry called upon the army and security forces to clean up the Arab Al Hosn area, give it a facelift and turn it into a reputable archaeological site, without resorting to the ministry that fails to preserve Egypt’s heritage.