The Israeli-Arab sector has been dragged into a conflict of interests, with Joint List Knesset members backing the Islamic movement. 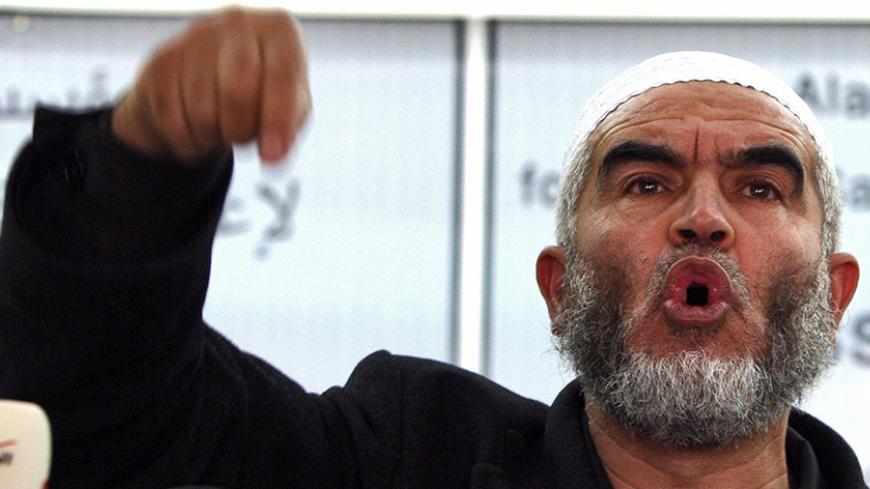 These are no easy days for the head of the predominantly Arab Joint List, Knesset member Ayman Odeh. It seems as if every step he takes and every statement he makes manages to infuriate some group of people or other.

It began on Oct. 11, when TV viewers were shocked to see the first ever live broadcast of the bitter dispute among Israeli Arabs over the wave of violence currently plaguing the country. As my colleague Ben Caspit wrote, Nazareth Mayor Ali Salam's attack on Odeh testifies to the split within the Arab community and the serious dilemma it faces.

Odeh was given the impossible task of uniting all the different factions and streams in the Israeli Arab sector into a single list, even though they have almost nothing in common apart from being Israeli citizens. Odeh tried to present a very different side of the Palestinian population in Israel. He tried to bring the sides together and heal the fissures and rifts that have emerged between Jews and Arabs over the past few years.

The current violence presents the Palestinian citizens of Israel with several major dilemmas. For example, there is the question of Sheikh Raed Salah, head of the northern faction of the Islamic Movement. Are Salah and his supporters the main source of the current escalation of tensions, as Israel claims, or are they simply scapegoats? The debate on this issue is surprising. Not only do most Palestinians in Israel refuse to support the ideology of the Islamic Movement’s northern branch, which calls for a complete break with the Israeli establishment and challenges the very legitimacy of the state institutions. Most of them fervently oppose this approach.

Some in the Arab sector are convinced beyond a shadow of a doubt that all this is part of a despicable conspiracy against Salah by the Israeli right, headed by Netanyahu, when in fact, they claim, Salah is just a religious leader who set out to defend Islam’s sacred sites. Many others believe that the Islamic Movement, and Salah especially, are pushing the Israeli Arab population to the edge of a dangerous abyss. Furthermore, they say, the Islamic Movement is creating a deep rift in the already complicated relations between Arabs and Jews, one that will be difficult if not impossible to mend. Several of the recent attacks, they point out, were made by Israeli Arabs from Umm al-Fahm and Nazareth.

That is why the Israeli Arab community feels that for the past few weeks it has been dragged into a violent confrontation with the country’s Jewish population, over issues that are usually repressed. These include combined identities, a confused sense of nationalism, divided loyalties and divisions between religious and secular and between liberal Israeli society and a more conservative Muslim Arab orientation.

But while the Arab public is torn between a desire to do whatever it takes to save what is left of its coexistence with Jewish society and anger aroused by incendiary attacks from the Jewish right, the members of the Joint List have decided to position themselves to the right of the man at the center of the controversy, Salah.

The desire to present a unified front led the members of the Joint List to appear alongside Salah on two separate occasions, even though they are usually repulsed by his separatist tendencies and make a point of not appearing with him publicly. At the Oct. 8 press conference organized by the Islamic movement in response to the prime minister’s threats to ban it, some Joint List members presented a united front with him.

Another event was an Oct. 13 demonstration in support of the protests in the town of Sakhnin. Salah was the main speaker, but other speakers included the head of the Hadash faction of the Joint List, Mohammad Barakeh, and Balad Chairman Wasil Taha.

Odeh did not attend either of these events. Nevertheless, he continues to claim that the recent events were an attempt by Netanyahu to turn the Israeli Arab community into the enemy. He wrote on Facebook, “Netanyahu, who is now isolated internationally after losing his ‘Iranian threat’ card, wants to re-create the idea of a Palestinian enemy, which includes the Palestinians living in Israel. What this means is that now especially, we must continue with the organized struggle, in which we know where we start and where we are headed. We must make our voices heard loud and clear, while at the same time taking every precaution so that we don’t fall into his trap.”

It is a mystery how Odeh’s basic philosophy of bringing Arabs and Jews together can be reconciled with this new approach, and how standing shoulder to shoulder with Salah, who has more opponents than supporters even among the Palestinian population of Israel, serves the majority of that population, which advocates for coexistence with the Jewish population.

This week, Salah succeeded in getting Odeh to follow his lead. As head of a party that encompasses all the different sectors of the Israeli Palestinian population, Odeh has shown weakness and a lack of understanding. He would be better off listening to the voices of the public that he is supposed to represent.