Israeli Labor Chairman Avi Gabbay surprised his party members when he announced that there was no possibility of forming a coalition with Arab Joint List party members, something that could restrict Labor's political prospects. 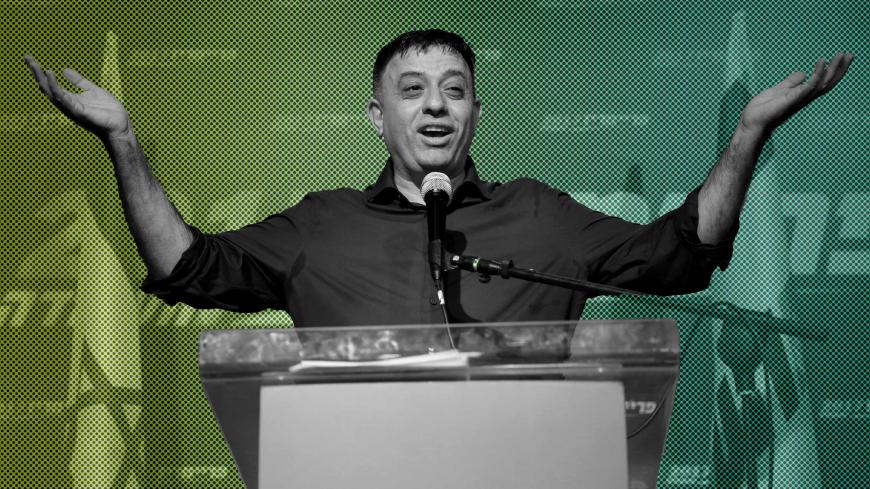 New Labor Party chair Avi Gabbay made a few surprising statements this week that made it abundantly clear he was abandoning the party’s traditional ideological stand as leader of the center-left, hoping to lure voters on the political right and gain sufficient support to replace Prime Minister Benjamin Netanyahu.

Gabbay — a newcomer to the Labor Party who was elected in the July 10 primaries to lead it — surprised most members of his party except for his ally, Knesset member Shelly Yachimovich. She claimed there was nothing new in his position. Many voters of the Zionist Camp — a two-faction union of which Labor is the senior member — who are also seeking a Netanyahu alternative were also likely taken aback by Gabbay’s statements.

Speaking on Oct. 14 at an event in the southern city of Beersheba, Gabbay declared that he would not sit with the Arab Joint List party in any future government. “We will not sit with them, unequivocally. I do not see anything that connects us to them," Gabbay said. The following day he veered further to the right, addressing a gathering of party activists like a die-hard right-winger: “We have to understand a very simple thing: We are the strong ones here. They always scare us, but we are the stronger ones. We are stronger than the Arabs. We do not have to be afraid of them; the Arabs have to be afraid of us," Gabbay said. And as if that were not enough, he added, “Jews in the Land of Israel must rely solely on themselves and ensure that everything is under their control.” He also told the stunned party members that he had met senior defense officials, half of whom do not believe there is any Palestinian partner for peace negotiations.

Before his party members could fully understand the direction in which their new leader was taking them, Gabbay continued to dismantle one by one Labor’s traditional positions. Party supporters who had sworn allegiance to the heritage of Prime Minister Yitzhak Rabin — assassinated in 1995 for trying to make peace with the Palestinians — heard the new chairman tell Channel 2 TV that there was no need to vacate West Bank settlements as part of a peace agreement with the Palestinians. “If we make a peace agreement, why should we evacuate?" he said. "I think that the dynamics or terminology we have become accustomed to here, where 'if you make peace you evacuate,' are not necessarily true." Gabbay made all of these statements in the span of 72 hours.

In an interview with Al-Monitor, Joint List Chairman Ayman Odeh gave Gabbay an ultimatum. “If he and the Labor Party want us to do our part to replace the regime, he and his top party members must now say clearly that they regard us as a legitimate group. If not, we will stop talking to him,” Odeh threatened. The Joint List must show Gabbay and the Labor Party that from now on there are no more “free political lunches,” he added.

Gabbay’s statements should be regarded on two levels: The first is his views regarding an accommodation with the Palestinians (“There is no partner”) and the price of peace (no settlement evacuation). The second is his attitude toward Israel’s 20% Arab minority. Although his associates said he had been speaking about members of the Arab Joint List specifically and not about all Arab citizens, it is hard to set the two apart. His remark to the effect that the Zionist Camp has nothing in common with the Joint List, for which most Israeli Arabs were forced to vote or risk not having any representation in the Knesset, was seen by most Arabs as a hostile targeting of them all. The Joint List, a union of four small parties, was only formed after Avigdor Liberman, head of the right-wing Yisrael Beitenu party, pushed through legislation raising the electoral threshold to keep the small Arab parties out of the Knesset.

Odeh claims Gabbay doesn’t understand the math: Without the support of the Arab List — currently the third-largest Knesset faction with 13 lawmakers — the Zionist Camp hasn’t a hope of replacing the Netanyahu government. “We Arabs constitute 20% of the population. Anyone wanting to change the political map must understand that without us, it’s impossible,” he said. Netanyahu, he added, understands this equation far better than Gabbay. Odeh points to the 1999 elections in which Israelis were given two ballots — one for the party of their choice and the other for prime minister — and 94% of Arab voters picked Labor’s Ehud Barak, who defeated Netanyahu for the premiership.

In rioting that broke out in October 2000, 13 Arab Israeli protesters were shot to death by police, a traumatic event that created a major rift between Israeli Jews and Arabs. The government was led at the time by Ehud Barak and the Labor Party. But despite the October events, Arab Knesset members from all factions continued to regard Labor as a potential partner. Now, it would seem, they have no one they can back. Not Netanyahu, who warned on the day of the 2015 elections against Arabs coming “in droves to the polls,” and not Gabbay, who shortly after assuming office essentially delegitimized the Arab legislators and ruled out coalescing with them.

Gabbay did not explain what led him to make such controversial declarations. One can assume that he has a hard time seeing himself in the same government with the provocative Knesset members of one of the Arab factions that constitute the Joint List, namely Haneen Zoabi and Jamal Zahalka of Balad. But crossing off the entire list, en bloc — in addition to saying that Israel need not give up its West Bank settlements in any future agreement with the Palestinians and that there is no Palestinian partner with which to make peace — alienates the Arab voters once and for all from the Labor Party. It also casts a sense of despair among Arab Israelis, confirming their worst fears that no good can come out of the Israeli political system for them. The disillusionment could also hurt the Joint List, which in the next elections will have to work hard to convince the Arab public that it can still bring about positive change on their behalf and give them a reason to head for the ballot box.