What exactly is Russia doing in Syria?

Moscow's stance on the Syrian conflict reveals an ever-complicated web of alliances, armament and regional plays, widening the diplomacy gap between the United States and Russia on Middle East policy. 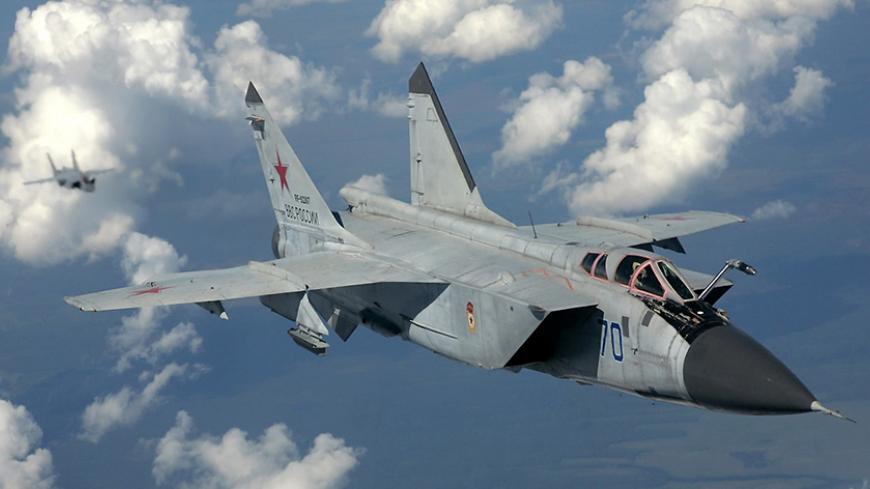 A Russian Mikoyan MiG-31 is seen in flight over Russia, June 30, 2011. Six of these supersonic interceptor aircraft are being delivered to Syria, in fulfillment of a 2007 contract. - Wikimedia Commons/Dimitry Pichugin

Russia's increasing supply of arms and instructors to Syria are among the most controversial issues in world media. But what is really going on?

First, Moscow has never concealed that it provides military-technical assistance to Damascus. This is done in accordance with international law and almost exclusively in the framework of signed contracts, as Russian officials constantly emphasize. At the same time, in the past, Moscow did not deliver weapons that could cause serious complications in Damascus’ relations with its neighbors. For example, in the recent past, Russia scrapped plans to supply S-300 anti-aircraft systems to Syria after Israel strongly opposed the deal on the grounds that the systems could cover practically the whole Israeli territory.

Second, the issue of fighting against the Islamic State (IS) has come to the fore. The United States and a number of coalition allies are already bombing IS positions in Syria. It is well-known that Russia has been calling for the formation of a broad coalition with the participation of global and regional powers to wage war against this evil, which Russia regards as a direct threat to its national security. Suffice it to say that from one single area in the Volga region, which is famed for its tolerance, no fewer than 200 people have already left to fight on the side of IS. This is to say nothing of the North Caucasus. The task of forming such a broad coalition is still far from being fulfilled.

Third, the moderate Syrian opposition forces, which are leading the fight on two fronts, are much weaker than the terrorists and are losing ground. According to Russian experts, the opposition controls about 5% of Syria’s territory, while almost half of the country is in the hands of IS. Under these circumstances, assistance to Damascus is viewed exclusively in the context of its struggle with the jihadists.

While Moscow has been particularly vocal in recent months on national reconciliation and developing contacts with many groups in the Syrian opposition, it continues to believe that the Syrian government is an ally to those who are fighting against IS and considers this fight a priority. As a Russian official told Al-Monitor on the condition of anonymity, “We believe that we aren’t helping President [Bashar al-] Assad as such, but the Syrian state, whose legitimate government sits in Damascus.”

According to reports, deliveries of arms and equipment from Russia to Syria have indeed increased. Some Russian media, citing conflict expert Yuri Lyamin — who blogs at imp-navigator — revealed a rise in the number of ships passing through the Black Sea straits in August and September. Lyamin speaks of the landing ships Novocherkassk, Azov, Karolev, Caesar Kunikov, Nikolay Filchenkov, as well as — for the first time — civilian ferry Alexander Tkachenko. Weapons, equipment, ammunition and supplies were delivered; trainers and advisers were dispatched.

Particular attention is being paid to the delivery of six supersonic interceptor MiG-31 fighter jets to Syria, in partial fulfillment of a 2007 contract, according to a Turkish news agency. It is clear that, due to their characteristics, these planes cannot be used to combat IS and are instead solely intended to protect the country’s airspace in view of potential external threats. These aircraft are able to control a frontline of 800-900 kilometers (497-559 miles).

Unsurprisingly, these reports are generating a flurry of rumors about Moscow’s direct involvement in the armed confrontation with Islamist extremists in Syria, something the Kremlin denies. When a reporter at the East Economic Forum, held Sept. 4 on Russky Island, asked whether Russia is ready to fight in the Middle East, President Vladimir Putin answered that it would be premature to address the subject: “We are considering various options, but what you mentioned is not on the agenda.”

These assurances, however, have failed to allay the concerns of the West, including the United States, as Secretary of State John Kerry told his Russian counterpart Sergey Lavrov in a telephone conversation Sept. 5. According to the anonymous source, one may wonder why Western air forces are allowed to strike IS positions inside Syria, while the Syrian air force — equipped with Russian weaponry — isn’t. At the same time, Russian public opinion is clearly against the direct participation of Russian troops in combat operations in the Middle East.

Russia, however, also delivers a large amount of humanitarian aid to Syria. Bulgaria’s decision to close its airspace Sept. 1-24 to Russian aircraft carrying humanitarian aid drew a negative reaction in Moscow. To reach Syria there are other air corridors, though it appears Greece granted a US request to cancel overflight permits for Russian airplanes bound for Syria. Russia has demanded an explanation from the authorities of these countries, and efforts to close down an air corridor between Russia and Syria — which journalists call the “Syria express” — are unlikely to succeed.

Another hot topic being discussed in the world media is the potential establishment of a full-fledged Russian naval base in Syria, in addition to the Russian navy’s logistic support station in Tartus, where a total of 50 people serve. Citing a source in the military-diplomatic field, the Sept. 3 issue of the Russian newspaper Argumenty Nedeli reported the possibility that Russia could install such a base in the coastal town of Jableh — which has a population of 80,000 people — near Latakia, “for the benefit of the navy, air force and special operations forces.”

For some analysts this is totally unrealistic. Nevertheless, the newspaper hypothetically broached the possible deployment at this base (were it to be built) of Pantsir S1 and Bastion missiles, Buk-M and even S-300PMU2 air-defense systems, which — provided the Syrian interceptor fighter jets were also deployed there — could foil any plan to enforce a no-fly zone.

One shouldn’t link Moscow’s plans to continue providing assistance to Damascus to Tehran’s plans. Iran is pursuing its independent policy toward the Syrian crisis, guided by its own national interests. Russia is doing the same, while also taking into account its developing relations with the Arab Gulf states. But could it be that the scale of the fight against IS in Syria will expand without the creation of a broad coalition of regional and global players, and even the necessary coordination — a fact that can only hinder success in this struggle?

Other questions are in order: How will the unfolding new round of confrontations affect prospects for a Syrian peace process? Will the intensified war of external actors — Western states and some regional countries — with IS and other terrorist groups stall progress toward implementing the provisions of the Geneva communique issued June 30, 2012, to end the civil war? The fact that lately Russia has dramatically broadened diplomatic contacts with various opposition groups, as well as meeting with Syrian officials, Western and Arab statesmen and diplomats, confirms Moscow has an interest in finding a political solution to the Syrian crisis. On this basis, it supported the plan of international mediator Staffan de Mistura, the United Nations’ special envoy for the Syria crisis. Will he be able to stop the bloodshed in Syria?