Under government pressure to keep interest rates low, Turkey’s Central Bank has failed to act against the free fall of the Turkish lira, leading to a massive burden on the foreign debt stock. 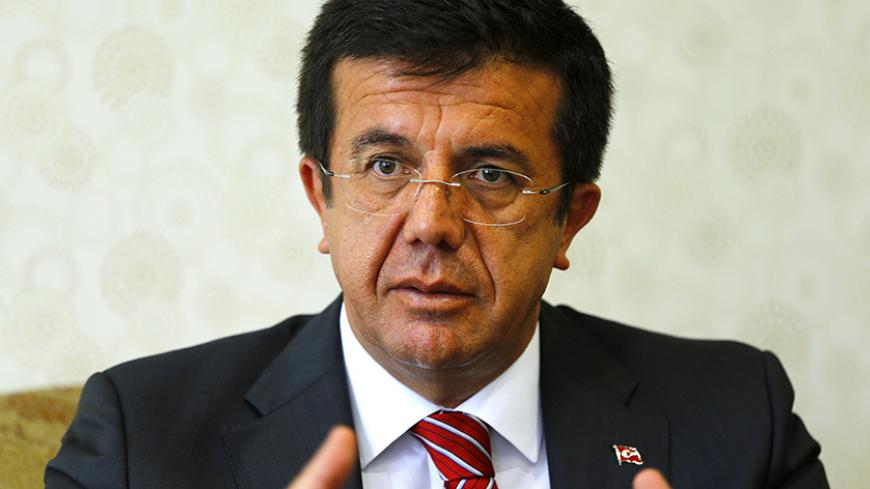 Turkey’s government has become so obsessed with interest rates that it has come to resist rate hikes at the expense of much bigger financial troubles. The origins of the government’s theory of an "interest rate lobby" seeking to undermine the economy could be tracked to its Islamist roots and desire to install an interest-free banking system, illustrated by moves to expand the Islamic banking sector via public banks. And while encouraging interest-free banking, President Recep Tayyip Erdogan and the government have exerted both open and covert pressure on the Central Bank to lower interest rates.

In an interview in July, Economy Minister Nihat Zeybekci, a figure close to Erdogan, offered a clear illustration of how the government keeps the Central Bank under pressure. “A one-point rate hike means an additional burden of 5 billion Turkish lira for the country [on its foreign debt stock]. The Central Bank should put its thinking cap on. This is a usury rate. You can’t have production, investment or employment with such a rate,” Zeybekci told the Yeni Safak daily.

Earlier, Erdogan had equated rate hikes with treason. “Wasting national resources through high interest rates and mismanagement amounts to selling out the motherland,” he said in a speech in February. More recently, on Aug. 26, he warned that "interest rates must go down because investment has to increase.”

Under such pressure, the Central Bank has struggled to make decisions on interest rates, and the one-week report rate, known as the “policy rate,” has remained unchanged at 7.5% over the past six months despite serious financial turbulence. The Turkish lira has nose-dived against the dollar, but the Central Bank has shied away from intervening with its interest rate weapon, wary of a president whose words are usually perceived as an “order.” A potential rate hike by the Fed, however, could force a hike in Turkey as well to calm market jitters that are likely to follow.

Turkey’s Central Bank is legally independent, regulated by a special law, but political meddling has paralyzed it at a time when it is supposed to act to calm the markets. As a result, the slump of the Turkish currency, aggravated by the failure to form a coalition government after the June 7 elections, has left Turkey with a bill that far exceeds the impact a rate hike would have had.

Umut Oran, a businessman-turned-politician and vice president of the Socialist International, has calculated the bill, based on Turkey’s total foreign debt stock. According to him, the policy of keeping interest rates low at the expense of a weakening currency has added 116.4 billion Turkish lira ($39.2 billion) to the foreign debt stock as compared with 5 billion Turkish lira salvaged by keeping interest rates unchanged.

As of Sept. 3, the Turkish lira had slid further to 2.97 against the dollar, with the added burden on the foreign debt now corresponding to 120.3 billion Turkish lira.

This figure represents the most tangible price of going to early election, now scheduled for Nov. 1. Had the Justice and Development Party managed to form a broad-based coalition government with the Republican People’s Party, the markets would have responded positively and the Turkish lira would have quickly stabilized. Moreover, foreigners would have opted to invest in Turkey instead of fleeing.

The existing interest rates may seem too high to the president and the economy minister, but they are no longer attractive to foreign investors. A foreign sell-off is underway on the domestic government bond market for the first time in six years. In 2012, the market saw net foreign buys of more than $16 billion, whereas the first eight months of 2015 saw a net foreign sale of $5.15 billion, signaling the biggest foreign sell-off in a decade.

The climate of uncertainty is likely to further hit the Turkish lira and push interest rates up in the coming days. The bill could grow even bigger if the Nov. 1 elections fail to expediently produce a government. Leading credit-rating agencies Fitch and Moody’s have already signaled the early polls would weigh negatively on Turkey’s credit ratings.

Sadly, accusations of “treason” are hurled way too easily in Turkey. Can Central Bank officials act independently while the bank is under constant pressure of being branded a “traitor” for hiking interest rates?

Yet, the Central Bank’s failure to take timely action carries the risk of exacerbating the rate burden in the future. One should keep in mind how the Central Bank’s Monetary Policy Committee was forced to convene urgently and hike rates by 5.5 points at a stroke in January 2014 after the Turkish lira nose-dived amid large-scale corruption probes targeting the government. The markets have their own dynamics. Playing political games with those dynamics is truly dangerous.