Investors are dumping the Turkish currency amid worries that a pre-election spending spree and pressure on the Central Bank to keep interest rates low could see the lira continue to spiral. 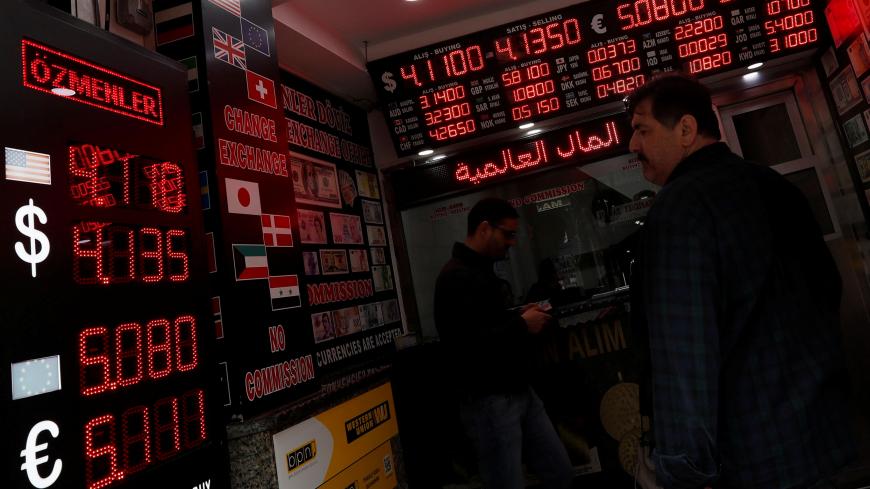 Turkish currency traders huddled in a tiny back street outside Istanbul’s Grand Bazaar on Thursday, seeking euros and dollars. The lira has sunk to a new record low after the government said inflation is running higher than expected. Three dozen men with walkie-talkies and cellphones barked out orders at the open-outcry exchange at Tahtakale, an informal currency market located outside the 15th century bazaar that is the symbolic heart of Turkey’s financial world.

The lira has taken a battering this year, losing about 10% of its value amid worries the country’s impressive growth rates are fueled by unsustainable stimulus spending and onerous borrowing, overheating the economy.

But President Recep Tayyip Erdogan is likely to keep his foot on the gas as he campaigns for re-election after pulling forward presidential and parliamentary polls by 17 months to June 24. This week, the government promised some $6 billion in debt relief and social security spending to win over voters.

Trader Ercan Yildirim estimated volumes were about $30 million at Tahtakale as the lira dropped 1.7% against the dollar, bringing losses this week to more than 4%. Thursday’s sell-off followed the release of official data that showed consumer prices rose 10.9% in April, faster than a consensus estimate of 10.5%. Core inflation, which excludes food and energy and reflects inflationary trends, was 12.24%, approaching an all-time high.

“It’s been a bad week for the lira, but it’s not just inflation. Markets are nervous about the election’s effect,” said Yildirim, who has been trading at Tahtakale for more than a decade. “The Central Bank needs to increase interest rates in a meaningful way, by as much as 2 percentage points, to halt the fall in the lira.”

Last week the Central Bank did raise one of its main interest rates by 75 basis points in its first hike this year, but the move fell far short of stopping the slide in the lira, one of the world’s worst performing currencies.

Economists are not sure whether policymakers will hike rates further at their June 7 meeting, because the nominally independent bank faces pressure from Erdogan to keep rates low. A self-declared “enemy of interest rates,” Erdogan wants cheap credit to power growth. Last year, the $850 billion economy grew by 7.4%, the fastest among G-20 countries.

The rapid pace has investors fearful. “Today’s stronger-than-expected Turkish inflation data will add to fears that the economy is overheating,” analysts at Capital Economics said in a note. “The weakening of the lira and the rise in oil prices last month was partly to blame. … Today’s data release caused the currency to tumble again.”

Deputy Prime Minister Mehmet Simsek, who oversees the economy, accused S&P of basing its decision on old information and said that snap elections had ended uncertainty in financial markets. “Cutting the credit rating after the decision to bring elections forward is wrong,” he said Wednesday.

Turkey faces trouble from more than just internal dynamics. Higher US interest rates are sapping appetites for riskier emerging-markets assets, and the price of oil — almost all of which Turkey imports — is at a three-year high.

At home, Turkey is borrowing to finance its current-account deficit, which measures trade and financial transfers and has swollen to about 6% of gross domestic product.

Companies are saddled with more than $228 billion of long-term debt, according to the Central Bank, with nearly a third of bank loans taken out in foreign currency.

Yildiz Holding, Turkey’s biggest food producer, said last month it had to refinance a staggering $6.5 billion debt, putting up all of its real estate as collateral, and Dogus Holding, which owns a major bank and a $1.5 billion port-development project, has had to ask lenders to restructure about $2.5 billion of its debt, news agencies reported.

Those big debt numbers were hardly on the minds of sellers at a flea market outside of the Grand Bazaar. Instead, they were anxious about how double-digit inflation has eroded the few liras in their pocket.

Recep, a former jewelry store owner who did not give his last name, told Al-Monitor he had not sold a single one of the second-hand phones on display on a small mat at his feet Thursday.

“People are hungry, they don’t have money to spend here,” he said. “If the economy is growing, we sure don’t see it down here at the bottom.”