IS intensifies attacks outside Aleppo

After news broke of the US-Turkish plan to establish a safe zone in Syria, the Islamic State stepped up operations against opposition forces in Aleppo's northern countryside. 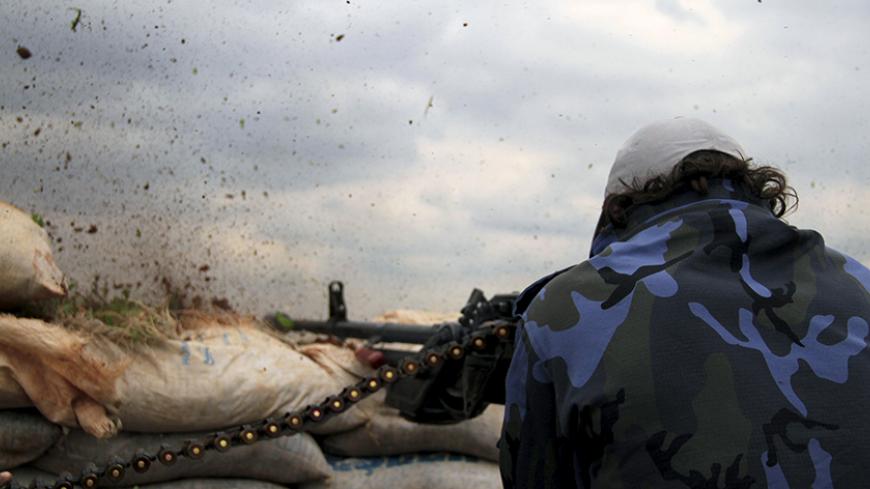 A rebel fighter of al-Jabha al-Shamiya (Shamiya Front) fires his weapon at the front line against Islamic State fighters on the outskirts of Marea, north of Aleppo, March 24, 2015. - REUTERS/Sultan Kitaz

ALEPPO — The Islamic State (IS) has been launching broad attacks against opposition-controlled areas in the countryside of Aleppo since Aug. 5, when talk began of Turkey and the US-led coalition cooperating with opposition forces to establish a “safe zone” in northern Syria. This area sits north of Aleppo, stretching from the city of Marea to near Jarablus on the Syrian-Turkish border. It would be "safe" in being emptied of IS, Syrian regime forces and fighters affiliated with the Kurdish Democratic Union Party.

The IS attacks began Aug. 9, four days after a statement by Turkish Foreign Minister Mevlut Cavusoglu about the “comprehensive” battle to be waged against IS. Should the safe zone be established, it could spell doom for the extremist organization in the northern countryside of Aleppo and important strongholds, including al-Bab and Manbij, in the eastern countryside. Thus, IS appears to be trying to shuffle the cards and prevent the establishment of the zone.

The IS-affiliated Aamaq news agency reported Aug. 11 that the group’s fighters had “stepped up” attacks on opposition forces north of Aleppo following Ankara’s announcement. IS first attacked the village of Umm Hawsh, 7 kilometers (4 miles) south of Marea, seizing it Aug. 9 after targeting the opposition operations room in the village with a booby-trapped car, killing 38 people. The group also took control of the village of Tilalyan, 4 kilometers to the north of Marea, on Aug. 14.

The biggest offensive took place Aug. 27, during which IS gained control of the villages of Dalhah and Harjala, near the Turkish border, as well as the town of Herbel, 5 kilometers to the northwest of Marea. Meanwhile, opposition forces regained control of the village of Sendf, 4 kilometers to the northwest of Marea, a few hours after IS had seized it.

IS is following a consistent strategy — seize control of small villages and then besiege the bigger villages and towns until they fall. IS’ latest attacks centered on Marea, the opposition's biggest stronghold in the region, now surrounded on three sides. The extremist group faced fierce resistance to the Aug. 27 attack, resulting in the death of some 50 of its fighters.

The opposition forces have found it difficult to regain areas that IS manages to hold on to for a while. On Aug. 28, the opposition waged a major offensive on Tilalyan, costing it 19 of its fighters, whose deaths IS publicized the following day with gruesome photos of their bodies. The attack failed, and the same scenario played out in Herbel, where the opposition launched a similarly unsuccessful effort Aug. 28.

IS is throwing all its weight behind this battle. Al-Monitor learned that the group had detonated eight car bombs in the northern Aleppo countryside in August, and it was confirmed that its forces had used a chemical agent or gas in its Aug. 21 attack on Marea to make advances in the city.

This all points to IS' determination to advance in the northern Aleppo countryside at all costs to thwart the establishment of a safe zone. There had already been bad blood between IS and the opposition forces in the north. In January 2014 in Tell Rifaat, the opposition killed Haji Bakr, the IS leader described as the group's mastermind.

Only a few civilians remained in Marea when Al-Monitor arrived Aug. 23. Although the chemical attack had been carried out two days prior, the acrid stench of it, akin to the smell of mold, was still strong near places that had been shelled.

Al-Monitor met with Tarek Najjar, head of the field hospital in the city. “So far, we have received more than 15 cases of people affected by toxic substances. Most of the injured suffered from blisters and redness of the eyes. We gave them first aid, and then they were transferred to Turkish hospitals,” he said.

The opposition fighters view Turkey as having created a terrible situation for them, opening a floodgate of IS attacks with its fiery comments about establishing a safe zone. “Turkey wants to implement the items on its agenda at the expense of our blood,” a local opposition fighter in Marea told Al-Monitor on condition of anonymity. “Where are the jets of the international coalition that are supposed to support us?”

The pressure on Jabhat al-Nusra to withdraw from Aleppo's northern countryside in response to the effort to establish a safe zone means the opposition has lost a strong ally on the war front against IS. The coalition airstrikes on the line between IS and the opposition remain tentative and limited, which helps explains IS’ advances in the area.