While the establishment of a safe zone along the Syria-Turkey border promises better living conditions for Syrian refugees, the politics and security concerns involved portend thinning prospects. 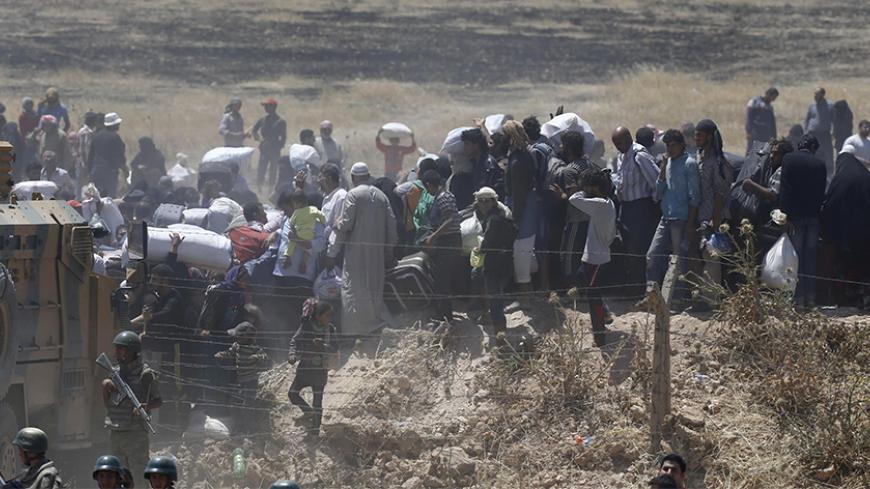 ALEPPO, Syria — Hours after Turkish Foreign Ministry Undersecretary Feridun Sinirlioglu announced Aug. 12 that Turkey and the United States had agreed on the terms to establish a “safe zone” in northern Syria, Washington swiftly denied it. According to Sinirlioglu, the safe zone would stretch over 98 kilometers (61 miles) in length and 45 kilometers (28 miles) in width in the north of Syria. However, despite these contradicting statements, there are several indications on the ground confirming that the establishment of such a zone is in the offing.

The establishment of a safe zone has become an urgent need for Turkey now more than ever, especially following the takeover of Tell Abyad by the People’s Protection Units (YPG) June 16 with the support of the international coalition. The YPG has emerged as a force to be reckoned with along the southern Turkish border. A safe zone would limit the influx of Syrian refugees into Turkey. What is more, this safe zone would act as a safe haven for millions of Syrians fleeing blazing battles in their country.

The first indication that the involved parties are establishing a safe zone is the withdrawal of Jabhat al-Nusra from the villages adjacent to the Turkish border in the northern Aleppo countryside — which would be part of the alleged safe zone — stretching from the city of Jarabulus in the northeast to the south of Marea.

Washington regards Jabhat al-Nusra, al-Qaeda’s branch in Syria, as an enemy and put it on its list of terrorist organizations in December 2012. Since Sept. 23, 2014, the warplanes of the US-led international coalition forces have been targeting the group’s sites. In light of this fact, it is likely Washington will not allow the establishment of a safe zone that could provide protection for Jabhat al-Nusra.

Al-Monitor learned from a military leader in the Syrian opposition who requested anonymity that there was a meeting to bring all opposition factions together with Jabhat al-Nusra. According to the same source, the meeting was to coordinate Jabhat al-Nusra’s withdrawal from the contact points with the Islamic State (IS) in the northern Aleppo countryside. This is a prelude to establishing a safe zone, provided that the rest of the factions take over the sites from which Jabhat al-Nusra will retreat.

On Aug. 9, Jabhat al-Nusra forces withdrew from the towns of Harjala, Dalhah, Hawar Kilis and Kafargan, while the Shamiya Front and the Sultan Murad Brigade (both affiliated with the opposition) took over the contact points with IS in these towns.

In a statement published on the same day, Jabhat al-Nusra declared this withdrawal under the pretext that it is not “permissible as per Sharia laws” to deal and coordinate with the international coalition. The group added the safe zone is to protect Turkey’s national security only, which is threatened by the YPG forces near the Turkish borders.

Many opposition factions shifted stances, namely the Ahrar al-Sham Islamic movement, which welcomed the safe zone. “We support the project of a safe zone in northern Syria with support from Turkey and political and field coordination between the revolutionary factions,” the movement said in a statement Aug. 11.

These declarations were not merely statements, as the opposition factions have actually attacked IS in the northern Aleppo countryside — more specifically in the safe zone to be allegedly established. Nevertheless, the opposition forces have yet to outmaneuver IS.

It seems that Turkey is unlikely to involve its army in a war against IS on Syrian territory. Turkish Foreign Minister Mevlut Cavusoglu denied Aug. 13 the existence of a Turkish plan to deploy ground troops in Syria in the face of IS. Thus, the most plausible scenario for the establishment of a safe zone is that major opposition forces would drive IS outside the safe zone, while Turkey and the international coalition would provide the area with air cover.

On Aug. 6, the Free Syrian Army-affiliated Sultan Murad Brigade started an attack in the Umm al-Qura area, 21 kilometers (13 miles) north of Aleppo, seizing control of five IS military sites. The group retreated as six of its fighters were killed and 13 others were injured by mines planted by IS.

The same scenario played out again Aug. 13 when Ahrar al-Sham, the Sultan Murad Brigade and the Shamiya Front launched a massive offensive with several tanks and armored vehicles on the villages along the Turkish border. Within a few hours, the opposition took over the IS-controlled towns of Kara, al-Mazraa and al-Kherba and a gas station, only to withdraw from them in the evening of the same day due to the heavily planted mines.

Although these airstrikes were relatively limited, they are seen as a major development, as the coalition has refrained from targeting IS locations that are near the opposition fronts, even when IS launched a violent massive offensive on the opposition in June.

The airstrikes came after Ankara agreed, July 29, for the international coalition to be able to use Turkish military bases, including Incirlik Air Base.

Pentagon spokeswoman Laura Seal said that US drones targeted IS locations for the first time Aug. 5 after taking off from Incirlik.