How Turkey intends to secure return of Syrian refugees

Turkey is seeking to establish a safe zone on its border with Syria to provide a safe haven for the Syrian refugees that currently number around 3 million in Turkey alone. 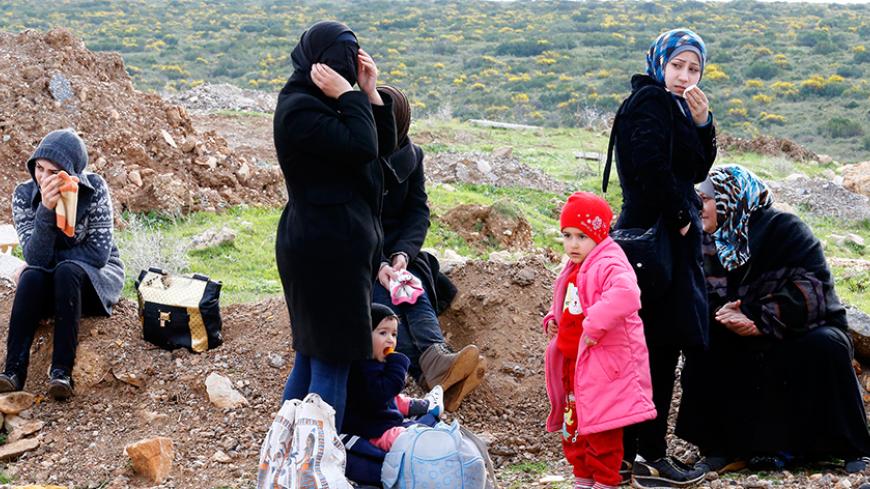 Syrian refugees wait on a road near a beach in the western Turkish coastal town of Didim, March 9, 2016. - REUTERS/Umit Bektas

GAZIANTEP, Turkey — On April 26, the Turkish Yeni Safak newspaper reported that the Turkish army was mobilizing its ground forces to carry out a large-scale military operation to eliminate Islamic State militants from a northern Syrian area 18 kilometers (11 miles) deep and 8 kilometers (5 miles) wide.

According to the newspaper, the Turkish army deployed almost half of its ground forces, led by a squad of elite forces, to create a safe zone along the Turkish-Syrian border 110 kilometers (68 miles) long and 45 kilometers (28 miles) deep. This safe area will allow the refugees to cross back into their country from Turkey, where their numbers exceed 2.7 million.

In a related development, the head of the opposition-affiliated Syrian National Coalition, Anas al-Abdah, noted in a press statement on May 12, “Turkey is entitled to establish a safe zone in Syria to secure the Syrians’ return to their country and protect its borders, according to the agreements signed between the two countries.”

Abdah further noted that the “Adana Protocol signed between Turkey and Syria in 1998 provides the groundwork for Ankara to establish a safe zone in Syria,” adding, “If this happens, Ankara will have secured its border, and Syrians can then safely return to their country.”

The safe zone is to be located between the towns of Jarablous and Azaz along the Turkish border. The first is under IS control, while the second is controlled by Ahrar al-Sham, in alliance with local factions of the Free Syrian Army.

Speaking to Al-Monitor, Fahim Abu Issa, the commander of the FSA-affiliated Sultan Murad Brigade, spoke about communication and coordination with the Turkish side in preparation for establishing a safe zone. “The safe zone will be under the FSA’s control, and the Turkish proposal is supported by the international coalition,” he noted.

The Sultan Murad Brigade is part of the Hawar Killis operations room, which receives ground support from the Turkish artillery that targets IS sites in northern Syria and air support from the international coalition.

Abu Issa did not disclose the details of the Turkish plan, but said, “We will continue our battles against the group until we liberate the entire northern and eastern countryside of Aleppo. After that, the safe zone will be announced and safe havens will be provided for refugees.”

Meanwhile, US President Barack Obama rejected the idea of establishing a safe zone in Syria, and said in a press statement from the German city of Hannover on April 24, “The issue surrounding a safe zone in Syrian territory is not a matter of an ideological objection on my part. … It's a very practical issue about how do you do it?”

He added, “Sadly, it is very difficult to see how it would operate short of going to militarily take over a big chunk of that country.”

However, some believe that the Turkish move is designed to occupy part of Syria. "It is a flagrant violation of national sovereignty and does not respect the relevant international resolutions of legitimacy,” Eldar Khalil, a member of the governing body for the Movement for a Democratic Society, told Al-Monitor. “Turkey’s goal is not to protect refugees. The Justice and Development Party is using them for blackmail,” he added.

Khalil said that a safe zone “was established both practically and effectively in Rojava [Syrian Kurdistan] in northern Syria, and our areas have turned into a truly safe haven for refugees.”

On March 17, Syria's Kurds announced a federal system within the areas under their control in the northeast, namely in Jazira, Kobani, Afrin and Tell Abyad.

Khalil noted, “There are tens of thousands of refugees and displaced Syrians in our regions. After [President Recep Tayyip] Erdogan's government recently refused to receive those who were displaced from Aleppo’s northern countryside, our forces provided the means to safely take them to Afrin.” He added, “Thousands of Iraqis, including the people of Mosul who escaped from IS, are now in Rojava.”

Khalil does not hide the Syrian Democratic Forces' desire to take over the areas between the Kurdish regions in northern Syria that are currently under IS control, noting, “Liberating the areas separating Kobani and Afrin will contribute to finding a solution to the deepening crisis in the country by draining the sources of support of IS, Jabhat al-Nusra and all other battalions associated with these extremist groups.”

Meanwhile, for others, talks about a safe zone in northern Syria are old news. Monzer Salal, a member of the governing body for the Syrian Promise movement, told Al-Monitor, “This issue was brought up several times about a year ago. We have held various meetings in this regard with the Turkish side, the Syrian National Coalition and the interim government, equipped an administrative staff, prepared projects and even made military arrangements, but most promises regarding the safe zone were empty and dishonest.”

Salal, who was born in the town of Azaz, believes establishing a safe zone in northern Syria has been failing “not because of military battles on the ground, but due to the lack of international will to do so.”

Salal stressed the Syrian Promise position regarding the safe zone: “[We] believe it is extremely necessary to establish the safe zone in order for Azaz and its countryside to become a true safe area and a haven for all refugees and survivors who are fleeing the war.”

However, Nawaf Khalil, director of the Kurdish Center for Studies, downplayed the significance of the Turkish proposal. He told Al-Monitor, “I rule out the possibility of the Turkish army taking individual steps because [Turkey] is part of the North Atlantic Treaty Organization and the international coalition.” He added, “Turkey is looking for excuses to occupy Syrian territory under the pretext of establishing a safe zone, but any unexpected move could result in a confrontation with the Kurds on the one hand and the rest of the international powers on the other.”

Analysts and experts on Syrian affairs believe it is likely that Turkey's efforts to impose a safe zone on its southern border will stumble against a US refusal, since the US offers air and ground support to the Syrian Democratic Forces and the Kurdish People's Protection Units constitute its military nucleus and have proven to be the most effective in fighting IS in Syria.