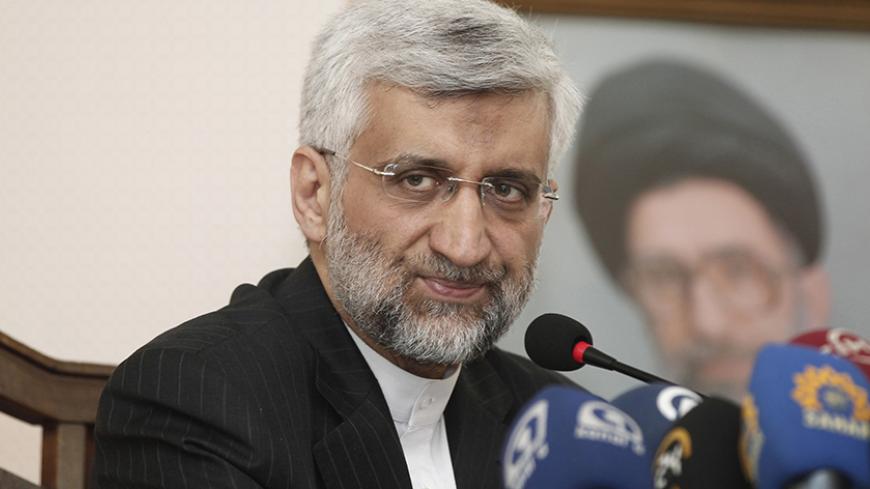 Saeed Jalili, former Iranian nuclear negotiator and secretary of the Supreme National Security Council from 2007 to 2013, defended Iran’s nuclear progress under his tenure at a special parliamentary committee to review the final nuclear deal. Jalili’s testimony at the Joint Comprehensive Plan of Action (JCPOA) committee made headlines on social media and news agencies; however, Iranian newspapers offered a counter to his mixed track record. Jalili’s speech was shared with the media through Seyed Hossein Naghavi Hosseini, spokesman for the special committee.

Jalili began his speech by listing his team’s achievements, which he included as increasing “the number of centrifuges, launching the Fordow [nuclear facility], 76% progress at the Arak heavy water reactor, converting the Tehran reactor to production, 450 kilos [992 pounds] enriched at 20%, and completing and using the Bushehr [nuclear power] plant.” At the same time, Jalili believes that under his administration, the West “lost hope in sanctions, the resistance economy took shape, the enemy’s [plans] in the 2009 protests [were foiled] and the stability of Iran’s regional position” took hold.

Jalili said that in the JCPOA between Iran and the five permanent members of the UN Security Council plus Germany, “approximately 100 absolute rights” of Iran were conceded to the opposing side. A number of points that Jalili found “unacceptable” were “Iran being an exceptional [nuclear case], replacing ‘permission’ with ‘right’ under the nuclear Non-Proliferation Treaty, and accepting unconventional measures.” According to Jalili, the Iranian negotiators “even retreated from the Geneva agreement.”

Hassan Beheshtipour wrote in Iran newspaper, which operates under the administration, that “the former head nuclear negotiator of the country these days is defending the achievements of his tenure in the JCPOA committee, an era which as the secretary of the Supreme National Security Council he knew well the specifics of the critical condition of the country, such as the condition of the currency market, goods, and the labor market.”

The article continued, “The economic situation of Iran was in a critical state and had it continued, essentially would have resulted in the locking of the economic foundations of the country, and consequently led to a crisis in other aspects of society. The supreme leader, taking into consideration the overall condition, changed the tracks of the negotiations, and by introducing ‘heroic flexibility’ put a new strategy for the nuclear negotiators.”

Saman Saberian wrote in Ghanoon newspaper, “Saeed Jalili, who according to American negotiator Robert Einhorn, instead of solving the nuclear crisis would talk about the history of Islam and Iran during the nuclear negotiations, with an invitation from hard-line MPs to the JCPOA special committee has put under question [President Hassan] Rouhani’s administration, [Foreign Minister Mohammad Javad] Zarif and the nuclear team, which all the experts speak of their skill, and continues to attack the achievements of the negotiations.”

Saberian said that the committee hearings, instead of bringing new information to light, was used as a platform by Jalili to present new accusations.