Iranian diplomat Sadegh Kharazi, who has recently received permission to start his own political party and has family ties to Supreme Leader Ayatollah Ali Khamenei, has thrown his support behind the nuclear talks. 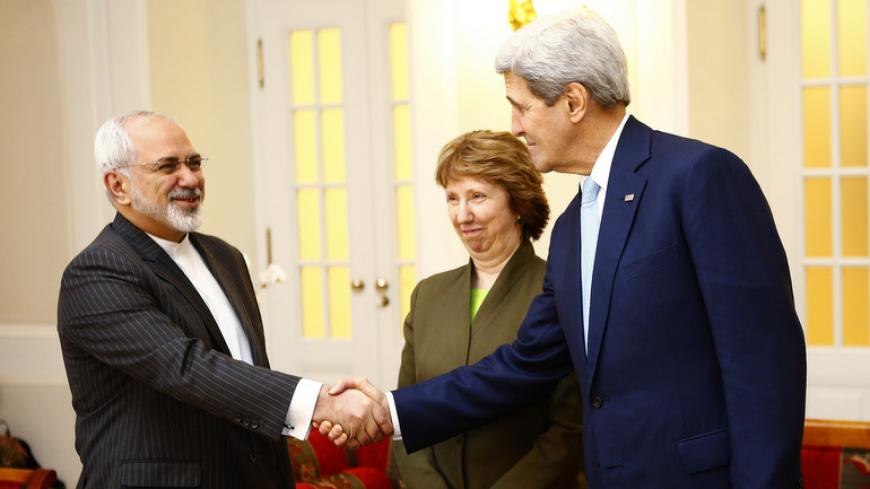 In Iran, foreign policy heavyweight Sadegh Kharazi has come out in strong support of the country’s nuclear negotiating team. The head of the newly founded Reformist Voice of Iranians party, and former envoy to France, expressed his stance in a two-hour live TV debate with member of parliament Alireza Zakani.

Kharazi is a nephew of former Foreign Minister Kamal Kharazi, who is now foreign policy adviser to Supreme Leader Ayatollah Ali Khamenei. The younger Kharazi also has family ties to Ayatollah Khamenei; his sister is Khamenei's daughter-in-law. To Western audiences, Kharazi is perhaps best known as a key figure behind the fabled “2003 grand bargain proposal” to the United States.

While the former Iranian envoy on occasion writes about the nuclear negotiations, this is the first time in years that he has appeared on national TV to directly confront conservatives.

Kharazi began the debate by arguing that Washington is not a monolith. He blamed what he referred to as the discrepancy between “America’s words and deeds” on Congress, Israel and Arab states. Yet, he argued that conflict with the United States won’t come to an end, even if the nuclear issue is resolved.

Kharazi, who has close ties to Tehran Mayor Mohammad Bagher Ghalibaf, further lashed out at former President Mahmoud Ahmadinejad, accusing him of having damaged Iran’s standing through “slogans.” In perhaps a slip of the tongue, Kharazi even referred to Ahmadinejad’s position on the Holocaust as part of the latter.

Kharazi was also blunt in his criticism of the previous negotiating team headed by Saeed Jalili. Jalili, a 2013 hard-line presidential candidate, is now Ayatollah Khamenei's personal representative in the Supreme National Security Council. Referring to Jalili’s tenure as chief negotiator from 2007 to 2013, Kharazi said that messages were simply sent back and forth and that “no negotiations” took place during those six years. He partially blamed this on what he deemed a lack of maneuvering space necessary for bargaining. In particular, Kharazi brought up the October 2009 negotiations in Geneva, which included a 45-minute meeting between Jalili and then-US Undersecretary of State William Burns. That encounter was the first overt bilateral conversation between Iranian and US officials within the framework of the nuclear negotiations. Kharazi strikingly called the meeting “one of the worst negotiations in the history of the talks,” stunning his counterpart by revealing on live TV that Ayatollah Khamenei had personally issued a warning to Jalili over what he had discussed with Burns.

Kharazi also brought up the bilateral channel between Iran and the United States via Oman. Arguing that engagement with Washington did not specifically have to do with the incumbent government, he said, “Toward the end of the 10th government [Ahmadinejad’s second term], the Omanis gave the Islamic Republic the message that the United States wanted more engagement with Iran on political and regional matters.” Going into detail, Kharazi said the “American request” had been discussed with the Ministry of Foreign Affairs, the Supreme National Security Council and the supreme leader. Ultimately, according to Kharazi, the Supreme National Security Council “decided that a team be appointed for negotiations with the US. These negotiations, which took place in Muscat, were headed by Mr. Khajeh, deputy of the foreign minister at the time [Ali Akbar Salehi].” Kharazi underscored that this endeavor proceeded with “the full supervision and oversight of the supreme leader.”

Kharazi also discussed the current negotiations, calling the November 2013 interim Joint Plan of Action (JPA) agreed between Iran and the P5+1 in Geneva “a new phase in the negotiations.” He referred to Foreign Minister Mohammad Javad Zarif’s approach as “intelligent diplomacy,” emphasizing that “we must support those who are in the negotiations.”

In another swipe at Jalili, and perhaps President Hassan Rouhani — who Kharazi did not appear to support in the June 2013 election — Kharazi said, “The current negotiating team is the strongest in the history of the negotiations. This is not merely what I say, but [the opinion of] the elders [senior leadership] of the system.”

Interestingly, Kharazi even discussed his personal history with Zarif to cement the point that there is no daylight between Khamenei and the foreign minister. “I have had 26-27 years of acquaintance with Zarif. I know all the dimensions of his thinking. I know that he will not take a single step in violation of the supreme leader; not just now, but also under the previous government and under Mr. [Mohammad] Khatami.”

Seemingly in response to a comment that sanctions brought Iran to the negotiating table, Kharazi said, “If we didn’t have a special position in the Middle East, if we didn’t have power, the West would not negotiate with us.” He even quoted Henry Kissinger as calling Iran a “regional superpower.” Moreover, Kharazi seemed to hint that the situation in the region could actually “have a positive effect on our success” in the talks.

He bluntly expressed his views on specific members of the P5+1, arguing that while the Americans “fight you to your face,” the Chinese “come from behind with a dagger.” He stated that the sometimes obstructive role of France in the negotiations was due to French foreign policy having been “taken hostage” by what he called extremists.

Kharazi went into the specifics of the negotiations, saying that “over 80 points of the Geneva agreement [JPA]” are up for discussion, and that “a comprehensive agreement may be hundreds of pages long.” He also stated that “the negotiation process has been delayed because of Israel and the Arabs.” Asked about when a final deal will be struck, Kharazi predicted that an accord could be reached “in the medium term,” as “the West has no option but to come to terms with a powerful Islamic Republic of Iran.”

He described the lifting of sanctions as equal to other Iranian red lines, such as those on enrichment and the sites in Fordow and Arak.

Kharazi’s stepped-up presence on the political stage (his party was licensed by the Interior Ministry on Dec. 1) signifies the expansion of organized support for Zarif. Most of all, considering Kharazi’s close ties to Khamenei and his lack of affinity for Rouhani, he seeks to clarify that there are no cracks between the Foreign Ministry and the supreme leader — likely to the chagrin of conservatives hoping for such an opportunity.