According to a senior IDF source, Israel's major concern should be the Iran-Shiite-Hezbollah axis and Iran gaining regional influence and power after the nuclear agreement. 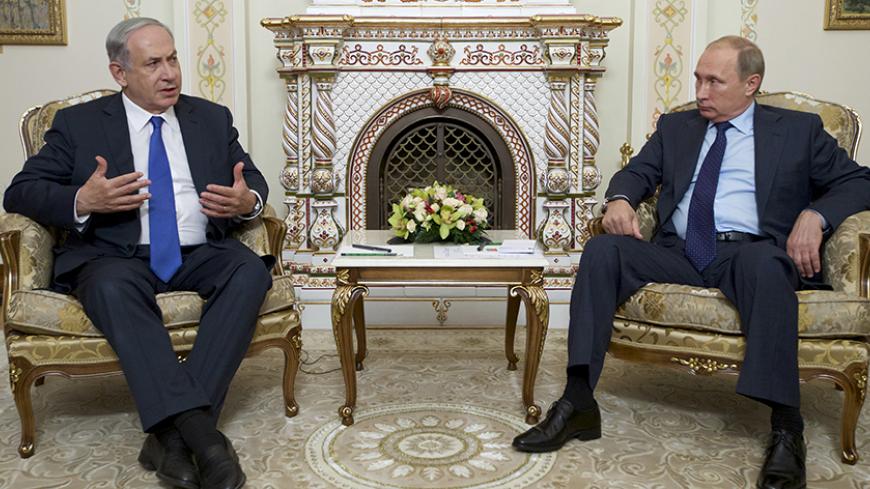 In general, Israeli prime ministers don’t drag chiefs of staff to such meetings. No one expects Putin to sit with Israeli generals over maps and aerial photos. A prime minister could easily limit himself to bringing along his high-ranking military secretary and the head of Military Intelligence’ Research Division. But Netanyahu set his sights high, and going for broke, took with him the national military commander and the national intelligence expert.

The prevailing assessment in Israel is that Netanyahu's reasons for doing so are mixed. One is a photo opportunity on the eve of Yom Kippur. Israel’s security situation is beginning to deteriorate, Jerusalem is burning and Qassam and Grad rockets are beginning to drizzle from Gaza. When Netanyahu flies on a dramatic security mission to the Russian bear and drags such undoubtedly popular public personages as Israel’s chief of staff and military intelligence chief with him, it helps the prime minister shore up his persona as “Mr. Security,” an image that is now beginning to crumble in the current reality.

A second reason: Netanyahu is sending a signal to Washington. Russian involvement in Syria is introducing a new and unexpected player in the world war between Sunnis and Shiites, a war being waged on territories that were once Syria as well as on parts of Iraq, Lebanon, Yemen and other places. While the West vacillates and struggles with existential torment over what to do, how to do it and whether something should be done against these brutes, Putin comes along. He plants a firm Russian boot on the ground in Syria, resoundingly making his presence known.

When an Israeli prime minister rushes to meet Putin before the Americans and Europeans, and takes along with him Israel’s highest-ranking security personages, this is a clear Israeli signal: We are also here. No one has a monopoly and if necessary, Israel will even talk with Russia and try to create joint leverage.

There are other substantive developments. At the beginning of the week, talking on condition of anonymity, a high-ranking IDF officer sharply criticized Russian actions and the dangers faced by Israel from the developing radical Shiite axis. The officer (who is among the IDF’s top brass) used stinging words as he expressed the position of those in the Israeli system who view the Iranian-Shiite-Hezbollah danger as a much more severe threat to Israel than its wayward, crazy sister, the radical Sunni coalition.

“We are in a battle of titans between the Shiite and Sunni axes,” the officer said. “This is a historic event, the biggest saga of our generation. In this equation, it's impossible to determine who is the good part or the bad part. We have to be wary of everyone. Still, when I compare the Sunni radical axis with the Shiite one, it’s clear to me who’s most dangerous. With all due respect to Islamic State achievements, the Sunni threat is along the lines of ‘more of the same.’ It’s something we are familiar with. But the Shiite axis, on the other hand, is based on Iran. We are talking about a regional power that dominates 25% of the world’s natural gas reserves and 11% of its petroleum reserves. It has tremendous human capital, high capabilities in science, technology, infrastructure, operational abilities, cyber developments. Iran, Iraq, Syria, Hezbollah and now also Russia are closing ranks against the Sunni axis — including, to our stupefaction, even an international coalition headed by the United States — and this should worry us. Do we want Iran sitting on our doorstep? Do we want Iran, a country that de facto rules Iraq, Syria and Lebanon and enjoys Russian backup — to win in this confrontation? A country that maintains its standing as a nuclear-threshold state?”

With regard to Russian involvement, the officer was crystal clear and incisive. “This development is very bad for Israel; it significantly strengthens the radical Shiite axis. The Russians aren’t really interested in the Shiites. What they want is to rein in the Sunni awakening that is gushing through the Caucusus. They are embroiled in Dagestan; in Chechnya, they want to halt the Sunni wave that threatens them, thus they are taking action in Syria. Their involvement can rock the boat, even to the extent of leading to a victory for [Syrian President Bashar al-] Assad and Hezbollah with Iran’s backing. Just imagine that after all these events come to an end, Assad remains on his throne with some kind of rulership, with the addition of 7,000 Hezbollah fighters, between 1,000-2,000 Revolutionary Guards and thousands of fighters from Shiite militias who were recruited around the world. All this with Iranian power and Russian backup, and all this in our backyard.”

The officer emphasizes that these forecasts could crumble overnight, and all regional prophecies are mutable. “To the same extent that Russia could gradually increase its involvement, including heavier ground forces, Syria could also become Putin’s Vietnam and embroil Russia in an Afghanistan-type quicksand. It’s impossible to know what will happen. What is clear at this moment is that Assad retains many thousands of Hezbollah fighters, about 1,000 Revolutionary Guard fighters, thousands of Shiite militia fighters and lots and lots of money funneled to him all the time by Iran. Now the Russians are adding themselves to this equation and undermining the equilibrium. Today, Assad is incapable of carrying out any kind of important military campaign without the presence of thousands of foreign fighters in his front lines. Assad has become the puppet of those who assist him, a ruler on life support, but he could also survive the process.”

Al-Monitor asked the officer whether he was equally concerned about the Sunni axis, mainly the Islamic State. “No,” he answered, “Although it’s true that the Sunni axis has scored startling achievements, they are totally isolated and not supported by any significant external power. They are facing off alone against the radical Shiite deployment that is supported by a regional power like Iran, a world power like Russia and an international aerial coalition headed by the United States. All of the world’s largest forces are fighting the Sunni constellation and so far have been unable to overpower it, which is a staggering phenomenon. But still, I am more deterred by an organized, state-power-like system than an unorganized, gang-like apparatus. We are talking about an exquisitely complex situation, and no one knows how it will end and when. We also say this to the Americans.

“Yet still, I think that history proves that large empires coming from the East never bring good tidings to the Jewish people. What we are witnessing now is the return of the Persian Empire. The nuclear agreement between Iran and the West freezes Iran’s nuclear program for a decade or more, but allows Iran to become an empire and increase its activities and influence throughout the Middle East. From our perspective, this is bad news indeed. The Iranian adversary does not resemble any foe we have yet faced, on any scale of magnitude. The Persian civilization is much more impressive, developed and powerful than what we have today among the Arab countries. All this should worry us a lot.”