Twelve conservative Iranian Parliament members wrote in a statement to the Intelligence Ministry that it must take action against spies that have infiltrated the media. 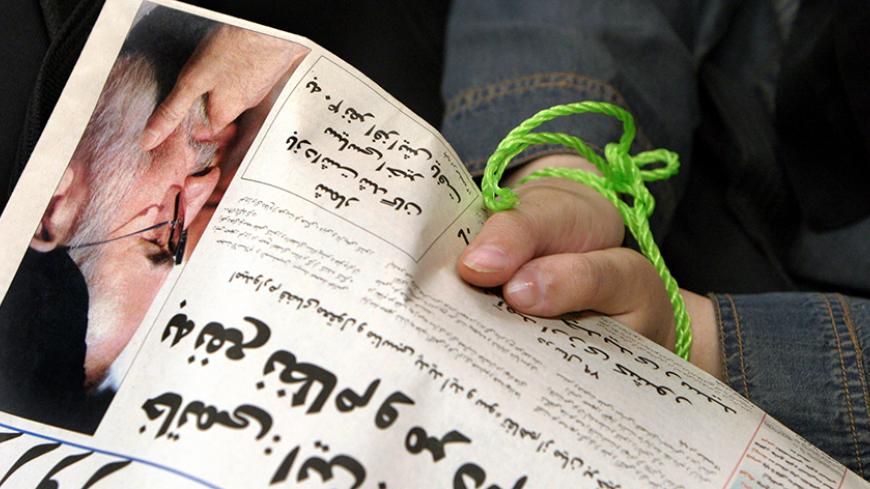 An Iranian journalist in symbolic rope shackle holds a copy of a banned Reformist newspaper at a protest gathering in Tehran, July 26, 2004. - REUTERS/Raheb Homavandi

Twelve conservative members of the Iranian parliament have signed a statement warning Iran’s culture and intelligence ministers that hundreds of spies have infiltrated Iranian media organizations. The statement comes just after comments by the supreme leader asking the Islamic Revolutionary Guard Corps to protect the country from the “enemy’s influence.”

The Sept. 21 warning was addressed to Intelligence Minister Hojat al-Islam Seyed Mahmoud Alavi and Minister of Culture and Islamic Guidance Ali Jannati. It read that there is “a destructive media bond and movement of hundreds of people in the country connected to Western intelligence services that are linked to countries such as Norway, the Netherlands and England. The head of the link outside of the country are the leaders of the 2009 sedition and the fugitives and refugees who went to Western countries.”

The “2009 sedition” is the term hard-line politicians use to describe the post-2009 presidential election protests in which dozens were killed, hundreds were arrested and many more fled one of the largest crackdowns of the last 36 years. While protesters claim that the elections were fraudulent, authorities accused them of being in the service of foreign governments wishing to spread discord and chaos inside the country. The crackdown led to a wave of political refugees to European countries.

The parliament members accused British and Western intelligence agencies of feeding subjects and content to “infiltrators” who work at “chain newspapers,” a reference to Reformist media outlets. The statement demanded that the Intelligence Ministry “immediately confront and create a case against this movement, which is an enemy of the revolution, and submit the case to the judiciary.”

The statement was signed by some of the most hard-line Iranian parliamentarians and former allies of President Mahmoud Ahmadinejad, including Morteza Aghatehrani, Mehdi Koochakzadeh and Javad Karimi-Ghodousi. Ahmad Salek, another signatory, defended the statement Sept. 23, saying, “From the beginning of the victory of the Islamic Revolution, America has had the plan to overthrow the Islamic Republic.” Examples he gave of the United States trying to overthrow the government was American support for Iraqi President Saddam Hussein during the Iran-Iraq War and support for various protest movements in Iran in 1999 and 2009.

Salek said that the “change” that President Barack Obama talks of is in reality “overthrowing the system” and this time, the United States will not pursue this goal militarily but through cultural influence, which the Americans will use as a steppingstone to political influence.

While in the past, Iranian journalists have been accused, targeted and even arrested for alleged connections to foreign countries, this new round of accusations seems linked to fears of how Iran will handle domestic changes after the nuclear deal. With tensions decreasing, hard-liners are cautious about allowing moderate President Hassan Rouhani to pursue major reforms.

Some analysts have suggested the letter is linked to Sept. 16 comments by Supreme Leader Ayatollah Ali Khamenei, who had warned of the influence of “enemies.” He warned that after the nuclear deal, “Foreigners are pursuing influence in decision-making, and if not possible, then decision-creating centers, so that when this conspiracy materializes, the orientations, decisions and public actions of the country will be set and administered based on the wants and will of foreigners.”