Former President Mohammad Khatami is under the spotlight once again, with some conservative parliamentarians asserting he is banned from public engagements, while others deny their claim. 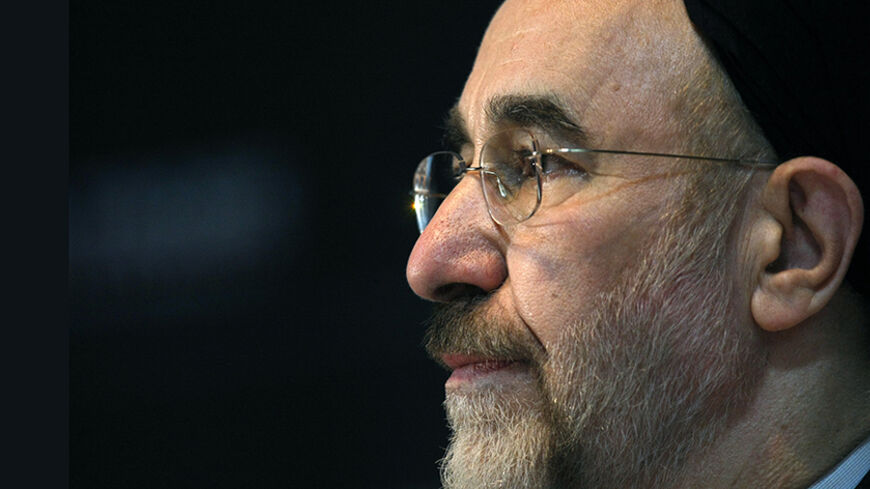 Ten Iranian lawmakers wrote a letter requesting that Justice Minister Mostafa Pourmohammadi implement what they claim is a judicial ruling banning former President Mohammad Khatami from a series of activities. The activities include leaving the country, giving public speeches and having his image appear in print or television.

After the 2009 contested elections, the former Reformist president from 1997 to 2005 was forbidden from leaving the country for a period of four years. The issue arose when he expressed the desire to attend former South African President Nelson Mandela’s funeral in December 2013. Iran sent another official in his place.

After the 2009 elections, for which two former candidates remain under house arrest and many activists are in jail, Khatami was often accused of being “one of the leaders of the sedition” who had encouraged street protests in what became known as the Green Movement. Many hard-liners continue to hold him responsible for challenging the government during that tumultuous era.

Parliament speaker Ali Larijani had called the travel ban on Khatami “one of the bad habits of the Ahmadinejad administration.” Former President Mahmoud Ahmadinejad denied involvement, saying it was a judicial issue. The head of the judiciary, Ayatollah Sadegh Larijani, is Larijani’s brother.

Parliament member Ali Motahhari, a traditional conservative who has advocated the release of the candidates under house arrest, claims that there is no such judicial ruling barring Khatami from speaking in public or his image from being seen on TV.

The ten parliamentarians include some of the hard-line politicians who are opposed to many of the policies of President Hassan Rouhani’s administration. While Khatami currently holds no official position, he is still one of the more popular politicians in Iran and his speeches at universities and ceremonies draw large crowds, especially among the youth.

The assertion that he was also banned from public speaking and appearing in print and video has been the top story on many newspapers and websites. He played a central role in Rouhani’s election and even appeared in one of his campaign videos, which has led some to believe there was never a ban on his images appearing on TV.

In an interview with Reformist newspaper Shargh Daily, one of the parliamentarians who signed the letter, Javad Karimi-Ghodousi, said that the bans on Khatami had been communicated with the Supreme National Security Council. He called Khatami “one of the four leaders of the sedition.” Presidential candidates Mehdi Karroubi, Mir Hussein Mousavi and his wife Zahra Rahnavard, who are all under house arrest, are presumably the other three.

Karimi-Ghodousi dismissed Khatami's popularity as a politician, saying that he probably has about 100 supporters “among his party and family members.” Khatami received 20 million and 22 million votes in the 1997 and 2001 presidential elections, respectively. Still, he said he was not happy about the ban. “For us it’s hard, too, that someone who has been a president for eight years to have such a fate. We’re not foreigners that would be happy about this,” he said, but stressed that everyone must abide by the law.

Karimi-Ghodousi also had announced in Mashhad that in a private meeting, Supreme Leader Ayatollah Ali Khamenei referred to Khatami as rebellious and had reportedly requested “the media, the Principalists, the elite to take a position against him," saying, "The atmosphere should not be safe for Khatami because he was one of the main agents of the sedition.”