Iran to Russia: Where are those missiles you promised us?

Following Foreign Minister Mohammad Javad Zarif’s trip to Moscow, Iranian media has been abuzz with talk about the long-awaited delivery of a long-rang S-300 missile defense system, which is still being held up by Russia. 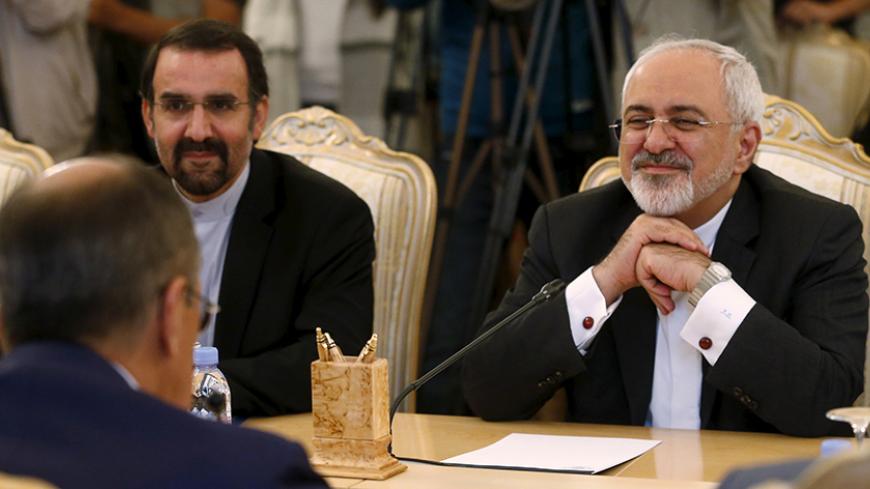 The trip by Iran’s Foreign Minister Mohammad Javad Zarif to Moscow to meet his counterpart Sergey Lavrov was front-page news in a number of Iranian newspapers. Many analysts and writers expect Iran and Russia’s economic and military ties to deepen following the nuclear deal.

One of the hottest topics of discussion following Zarif’s trip was the long-awaited delivery of the long-range S-300 surface-to-air missile defense system, which is designed to defend against aircraft and cruise missiles. Iran has already paid for the missiles, but Russia has held up the delivery over pressure from Western countries over sanctions on Iran’s nuclear program.

After speculation erupted in the media, Iranian Defense Minister Hossein Dehghan spoke to reporters about the delivery of the missiles Aug. 18. He said the UN Security Council “used resolutions as an excuse but this could not be an obstacle for the S-300 delivery to Iran.” Earlier, an Iranian source had told the Russian website Sputnik that the missiles would be delivered to Iran 30 to 40 days after the signing of the comprehensive nuclear deal.

Dehghan continued, “All the changes from these last years on the S-300 will be applied and we will receive an up-to-date system,” adding, “The text of the contract is ready and it is planned that next week [Iranian officials] will travel to Russia to sign the contract.”

He explained, “Before, we had requested three S-300s, and another one has been added to that and the price has gone up.”

On the issue of fighter jets, Dehghan said, “We stated our needs to the Russians and did not speak to any other country. We did not have any requests of France in this area, and I see it as improbable that we would have military cooperation with this country.” When French Foreign Minister Laurent Fabius visited Tehran on July 29, Iran government spokesman Mohammad-Bagher Nobakht said Iran could buy more Mirage war planes from France, though there are many reasons that scenario is unlikely.

Dehghan also said that Iran is not and has not sought a missile with a range longer than 2,000 kilometers (about 1,200 miles).

After Zarif’s trip, Shaib Bahman wrote for Arman Daily about Russia’s role in the region, arguing that following the nuclear deal, Russia will continue its cooperation in Iran’s nuclear program and is inclined to continue its arms sales to Iran and have a role in Iran in technology and industry. On the upcoming trips by other Middle Eastern leaders to Russia, specifically King Salman bin Abdul-Aziz Al Saud of Saudi Arabia, Bahman said he believes Russia desires a “new anti-terrorism coalition” in the region and will seek out important regional players such as Iran and Saudi Arabia. Bahman said, “If the Russians are able to create such a coalition, this coalition will be a counter to the American coalition.”