Iranian Foreign Ministry: Russian use of air base has ended

A spokesman for Iran’s Foreign Ministry said that Russia’s use of Hamedan air base has ended for now and discussed the potential for Russian, Iranian and Turkish cooperation in the region. 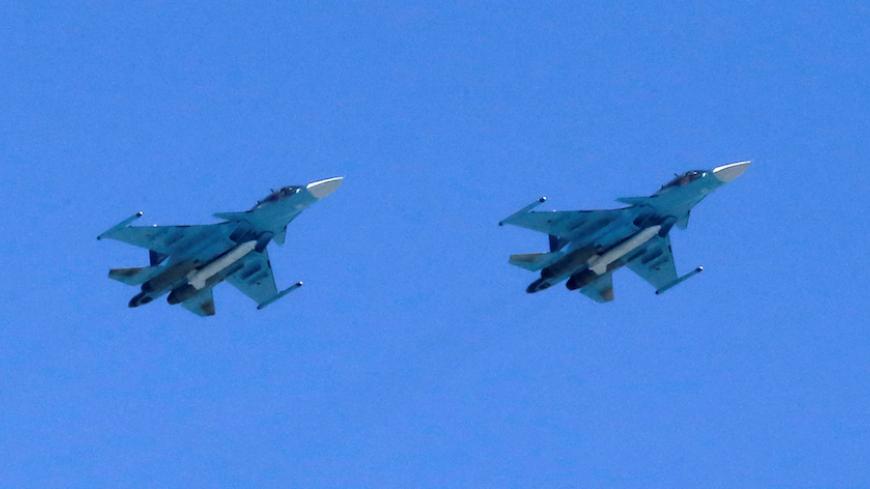 Russian Sukhoi Su-34 fighter-bombers fly in formation during the Victory Day parade, marking the 71st anniversary of the victory over Nazi Germany in World War II, above Red Square in Moscow, May 9, 2016. - REUTERS/Maxim Shemetov

Russia’s use of an air base in western Iran to launch attacks inside Syria has come to an end for now, according to Iranian officials.

Russia became the first foreign military since World War II to use Iranian soil to launch a military attack last week when long-range Tupolev-22M and Sukhoi Su-34 bombers took off from Hamedan air base. The news, which was first revealed by Russian officials, led to a great deal of commentary both internationally and domestically. A number of Iranian parliamentarians had raised objections, arguing the military influences of superpowers in Iran have had a damaging impact on the country and that the establishment of a foreign military base is against Iran’s constitution.

In an Aug. 22 news conference, Foreign Ministry spokesman Bahram Ghasemi tried to allay those fears. “Regarding the situation with Russia, what was done was a temporary act and coordinated,” said Ghasemi. “I must emphasize that Russia neither has a base in Iran nor is it stationed here. It was temporary, and it has ended for the time being.”

In response to a reporter’s question about why the news was first announced by the Russians, Ghasemi said both Iran and Russia had agreed they would announce the operation at the same time but added that possibly due to the time difference Russia announced it first. However, he said that Ali Shamkhani, the secretary of Iran’s National Security Council, immediately confirmed the news shortly after. He added that the announcement was “nearly simultaneous.”

In an interview earlier, Iranian Defense Minister Hossein Dehghan criticized the Russian announcement regarding the use of the Hamedan air base. Dehghan believes the Russians did this because they wanted to show they are a military superpower and they wanted to use it as leverage in negotiations with the United States in order to secure their influence over the political future of Syria.

Dehghan also rejected any type of Russian military base in Iran, adding that the use of Hamedan was for a “very short, clear period and linked to operations in Syria.”

During the press conference, Ghasemi also addressed Iranian Foreign Minister Mohammad Javad Zarif’s recent trip to Turkey. He said that Iran and Turkey have “difference of views” over Syria and that they do not expect a few meetings to resolve the differences. He said that both countries are influential in the region and share a border and it is better for them to cooperate. However, he added that neither country is interested in dictating its positions to the other country.

Ghasemi said that Iran welcomes the improved relationship between Turkey and Russia. On the possibility of a Turkish, Russian and Iranian axis in Syria, Ghasemi said it is “too early” to discuss such a formation. He added that Russia and Turkey are still trying to restore their ties to what they were before the downing of a Russian jet at the Syrian-Turkish border last fall. He also said that Iran, Turkey and Russia have different concerns and points of views on various issues in the region. For example, he said, the Russians do not share a border with the Kurds and therefore have different considerations. He added that while the three countries are holding consultations and meetings, it is not possible to predict where they will end.