In a televised interview, President Hassan Rouhani says the gates of the world have opened up to the Iranian people. 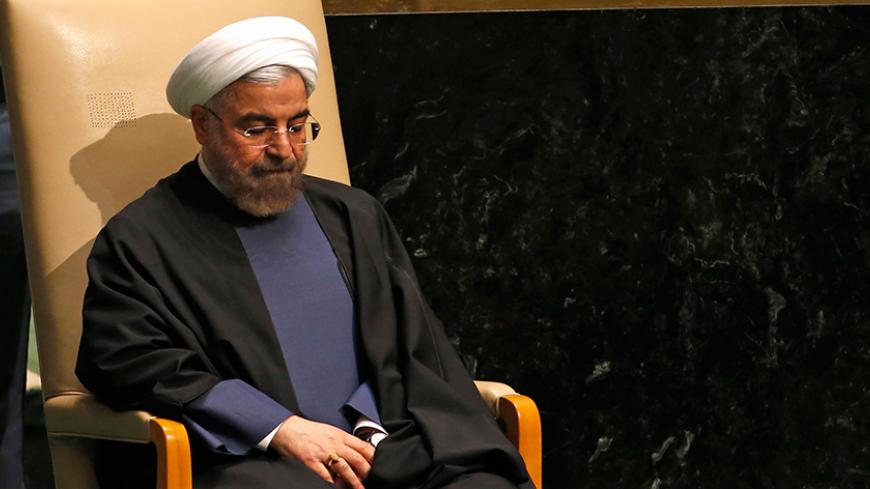 In an interview Aug. 2 with Iranian television, President Hassan Rouhani sold the achievements of the nuclear deal between Iran and five permanent members of the UN Security Council plus Germany (P5+1). The interview with two journalists — a man and a woman — resembled a speech with long-winded answers to questions. However, the setting, and the camera angle placed between the two journalists to make it appear Rouhani was speaking directly to the camera, provided Rouhani an opportunity to promote the nuclear deal to Iranian families who are eagerly anticipating the economic benefits from the deal.

Rouhani continued to advocate his “win-win” strategy for world relations, saying that the “mentality that there are only two paths against the world, either we submit to the world or the world submits [to us], there is no logic in this. There is a third way, cooperation with the world, of course, a constructive cooperation, within the framework of national interests, and a win-win agreement.”

“I seriously believe and I have always believed that a win-lose agreement is not possible; second, if it happens, it will not endure,” he added. “An agreement has to be a win-win agreement where we reach our primary goal and the opposing side, if it feels that it has an important goal, reaches that goal. Otherwise, then it is not an agreement, and second, it is not a durable agreement.”

Rouhani said that the P5+1 had one important goal while Iran had three important goals, and both sides have claimed they have been successful in achieving those goals within the agreement. He did not explain what those specific goals were. Rouhani did add, however, “We don’t say that we trust the opposing side 100%.”

Rouhani also said that his administration has also kept his economic promises and that despite the drop in oil prices, inflation has been lowered from a high of 40% to 15%, and Iran, which had been having negative economic growth, soon will have a positive growth rate.

Rouhani said the sanctions were so limiting that Iran was forced to pay extra amounts for banking transactions and the shipment of goods. As an example, he said, “If 100 billion [toman, or $34 million] worth of goods entered the country, whether it was essential goods or something else, 25 billion [toman, or $8.5 million] were wasted. This is from the pockets of the people.”

On Western claims that this agreement has prevented Iran from obtaining a nuclear bomb, Rouhani said that one of the reasons the West had doubts about Iran’s nuclear program was traces that Iran had enriched beyond 70%. Rouhani said Iran was unaware of this and realized the issue was that they had bought the centrifuges from a country that had enriched at this level and this only became clear afterward. He dismissed that Iran was after a nuclear bomb, which he said that the supreme leader has forbidden, but “if the opposing side claims they have been successful, there is no problem, either way we are not out to build a bomb.”

As far as Iran’s defensive capabilities and “strategic arms,” Rouhani claimed that in that last two years, Iran has already accomplished 80% of what Iran had accomplished in the last 10 years. While there is no way to substantiate this claim, this is certainly a criticism of the previous administration.

Addressing a common criticism in Iran, Rouhani said that the agreement does not limit Iran’s missile capabilities. He explained that the agreement only prevents Iran from having missiles that can carry nuclear warheads, which he said Iran was not pursuing anyway.