At a conference in Tehran on the nuclear agreement with the P5+1, Iran's senior negotiators expressed their satisfaction with the deal and confidence in its implementation. 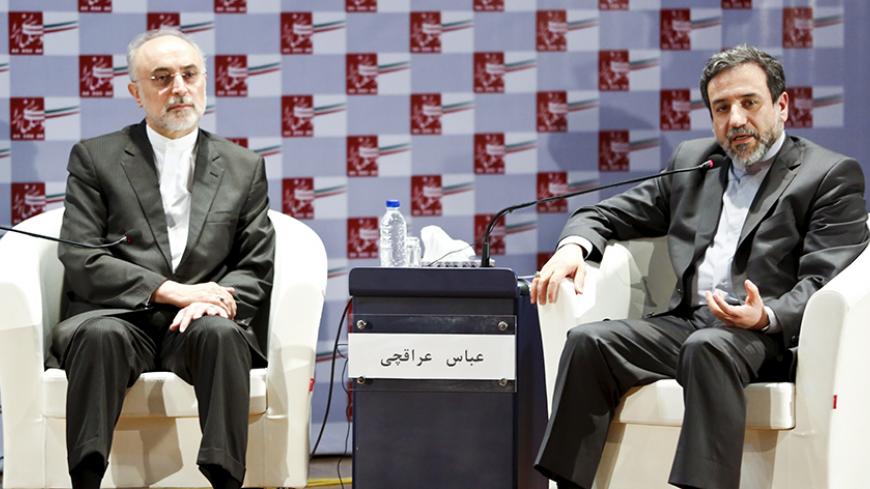 TEHRAN — An event titled “Reviewing the Nuclear Agreement” was held Aug. 9 at the headquarters of Ettela'at, one of Iran's oldest newspapers. Hosted by Iranian Diplomacy, an influential diplomatic website, the session brought together Iran's senior nuclear negotiators, who were responsible for reaching an agreement on the Joint Comprehensive Plan of Action (JCPOA) with the P5+1 (China, France, Russia, the United Kingdom and United States plus Germany).

Invitations to reporters, political analysts, former officials, and negotiators and foreign envoys had been issued a week in advance. Although the meeting had been scheduled to start at 11 a.m., eager guests began entering the fourth-floor amphitheater at 9:30. The think-tank-style session was the first public gathering of the negotiators since the July 14 announcement of the JCPOA. After a brief delay, Foreign Minister Mohammad Javad Zarif, Ali Akbar Salehi, head of the Atomic Energy Organization of Iran, and Deputy Foreign Ministers Abbas Araghchi and Majid Takht-Ravanchi took the stage.

Sadegh Kharazi, head of Iranian Diplomacy, chaired the session. Kharazi, who previously served as Iran’s ambassador to the United Nations and France, had strongly backed the negotiating team for the past two years. He opened the event by expressing his support for the JCPOA, stating that it has ended Iran’s isolation and driven an “unprecedented” wedge between Washington and Tel Aviv.

Zarif, seated next to Kharazi, spoke first and began by describing the JCPOA as balanced in terms of addressing the concerns of all the parties. “It is not like we were able to force the other side to agree with all our demands, but they could not force us to agree to all of their demands either. The text is also very nuanced in its implementation schedule,” he stated.

After the deal's announcement, hard-line media outlets, such as Kayhan and Vatan-e-Emrooz, as well as Principlist members of parliament began lashing out at it and at UN Security Council Resolution 2231, which endorses it. They have argued that Iran has agreed to accept numerous restrictions while gaining little in exchange. Zarif responded sharply to these criticisms and stated, “The biggest treachery is to tell people that the nuclear agreement was a defeat.” The foreign minister, who some hard-liners have accused of treason, made his assertion loudly and without hesitation, and it was greeted with applause.

Zarif also said the JCPOA proved to the world that the West’s use of exclusion and deprivation against Iran had been ineffective. He further argued that the administration of President Hassan Rouhani had not been looking for a scenario in which Iran would be the only winner. He said, “If we were only looking to gain from these agreements, the whole thing could end up in war. Mr. Rouhani and I were both looking for a win-win solution and wanted to show that we are looking for a new mode of engaging with the world.”

Araghchi also discussed how Iran had agreed to some of the demands of its counterparts, noting that the most important goal of the United States had been to secure a one-year breakout time. He stated, “In accordance with the religious edict issued by the supreme leader [Ayatollah Ali Khamenei], developing nuclear weapons is not our aim, and thus, by accepting some of the restrictions that the other side had asked for, we managed to satisfy their demand.” Araghchi strongly defended the JCPOA, saying, “I completely support this agreement, and honest to God, I believe we should celebrate [it].”

Salehi introduced the cases of Libya, which relinquished its nuclear weapons program, and North Korea, which decided to continue its efforts to build an atomic bomb. “We are neither Libya nor North Korea. We have our own approach. We decided to show transparency and negotiate over our nuclear program,” he told those gathered.

Takht-Ravanchi talked about the future of the JCPOA and what will happen after US President Barack Obama leaves office. He dismissed the possibility of future US presidents annulling the deal, stating, “It is mentioned in the JCPOA that the US government should remove the sanctions gradually. If a US president decides not to remove the sanctions, then it is a clear violation of the agreement.” He added, “It is very unlikely that anyone in the US government would attempt to nullify this agreement.”

During the event, the audience repeatedly applauded statements by the negotiators. It appears that one of the reasons for the session was to show critics of the deal how strongly the Reformist media outlets and independent analysts support the agreement in the hope of softening hard-line opposition to it.

Although reporters had written down questions and organizers had collected them, as 1 p.m. approached, Kharazi announced that there would be no time for the speakers to answer them. Indeed, as soon as the session ended, Zarif and his colleagues left the building through the VIP exit. Kharazi said, however, that the questions will be answered and published on Iranian Diplomacy.

After the session, Al-Monitor was able to interview Cyrus (Sirous) Nasseri, a member of the negotiating team during Mohammad Khatami's administration. He assessed that the JCPOA will “pass the test of Congress, either with or without the presidential veto,” calling rejection an “unlikely event.” He also said, “US authorities themselves are presenting the case very plainly, and what will happen is that the structure and foundation of the sanctions will be completely demolished or at least severely, severely cracked.”

Asked whether the JCPOA will help improve Iran-US relations, Nasseri asserted, “The purpose of Iranian diplomacy, immediately post-Vienna, has been on regional issues. … The next priority for Iran and for the regional countries should be to deal with the uncomfortable situation [that] has been unduly prevailing in this area for some time.” The former negotiator, who retains close ties with the current negotiating team, also told Al-Monitor, “If things go well with the JCPOA, the US will also seize this opportunity to hopefully contribute in a positive manner in order to settle the hotbeds of tension.”

Nasseri described US Republican Party members' stance against the nuclear deal as pre-election posturing. He said, “The Republicans will also embrace the same agreement, because based on their own perceptions and their own objectives, there is actually no other alternative for them.”