In an interview with Al-Monitor's Barbara Slavin on the sidelines of the Non-Aligned Movement summit in Tehran, Iranian Foreign Minister Ali Akbar Salehi praised the presence of Egypt President Mohammed Morsi after decades of Iranian-Egyptian estrangement. 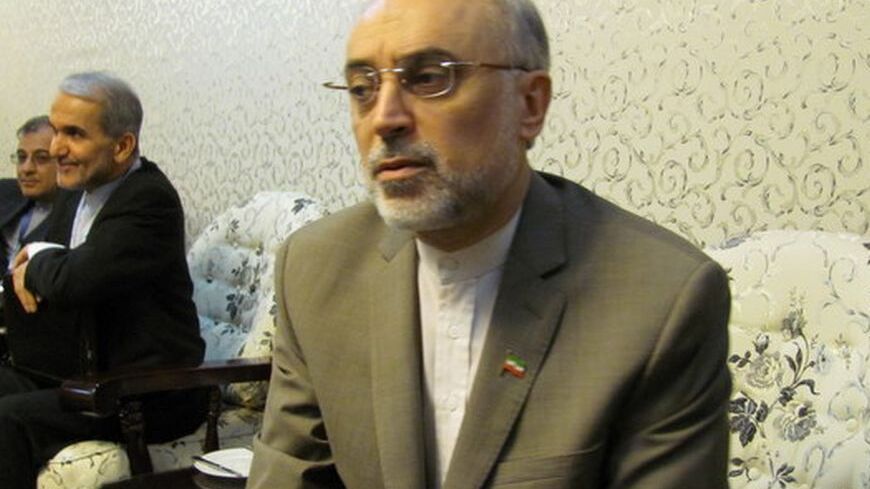 TEHRAN — Iranian Foreign Minister Ali Akbar Salehi said Tuesday that his government will not be offended if Egyptian President Mohammed Morsi spends only a few hours in Iran later this week. In an interview with Al-Monitor and Time Magazine on the sidelines of a conference of the 120-member Non-Aligned Movement (NAM), Salehi said the mere “presence” of an Egyptian leader in Iran after decades of estrangement between Iran and Egypt would be a “landmark.” Salehi repeated Iranian offers to help resolve the crisis in Syria — offers that the Barack Obama administration has rejected. The soft-spoken foreign minister, who got his PhD in physics from MIT before the 1979 Iranian revolution and previously served as Iran’s representative to the International Atomic Energy Agency, also said he remains optimistic that a “win-win” solution can be found to Iran’s nuclear confrontation with the US and much of the international community despite the current apparent deadlock in talks between Iran and the five permanent members of the UN Security Council plus Germany (P5+1).

Al-Monitor:  We heard that [Palestinian Authority leader] Mahmoud Abbas is coming; was there also an invitation to Hamas leader Ismail Haniyeh?

Salehi:  Well, the Palestinian issue is such a great issue of interest to everybody that no matter how many representatives come from Palestine, still there is room to represent such a great country. They are all welcome ... Our invitation is based on the rules and procedures of the NAM so from this perspective, an invitation was delivered to Mr. Abu Mazen [Mahmoud Abbas]. But we would have wished that as many Palestinian officials and heads of governments, states could have attended this meeting.

Al-Monitor:  So an invitation to Haniyeh was not issued?

Salehi:  Let’s put it the other way around. An invitation was issued to Mr. Abbas. Look at the half-full glass, not half empty.

Al-Monitor:  Regarding Egyptian President Mohammed Morsi. The Egyptian Foreign Ministry says he is only coming for a few hours and that he will have no bilateral meetings with Iran. Are you disappointed about this?

Salehi:  … It takes all sides to make an arrangement. So first of all, we welcome very warmly the presence of President Morsi in Iran. His presence by itself is a landmark … visit to Iran after decades, I would say, of not having … a full political relationship … It’s up to him to decide whether he wants to stay longer, shorter … We will be more than happy to have him more with us.

Al-Monitor:  Can you give us an update on the P5+1 talks.? Is there any possibility of progress, or is everything frozen until after our elections?

Salehi:  [long pause] I cannot say more than what you have read in the media. All I can say for the time being … is from the collected information that I have. I’m optimistic about … the future outcome of the talks of the P 5+1, but we have to be a little patient and be cautious in our rhetoric and reactions and keep our limits. I’m of the view that there is a way out based on a win-win situation. … Although we see no justification for the worries of the 5+1 vis-à-vis our peaceful nuclear activities, … we recognize their worries and we are ready to mitigate and alleviate — recognize mechanisms internationally to remove all these worries. But at the same time, we expect in return they also recognize our full rights to peaceful nuclear activities including the right to enrichment and the complete fuel cycle.

Al-Monitor:  Are you running for president of Iran?

Al-Monitor:  What do expect to achieve in this conference regarding Syria?

Salehi:  This conference is a non-aligned movement conference, which has its own rules regulations and procedures. Decisions are made based on consensus. So the case of Syria has been tackled and three paragraphs have been adopted already by the participants in the NAM. There may be some sideline talks with like-minded countries and with countries that would wish to take some part in expediting the peaceful resolution of the Syrian crisis, avoiding any external interference in the internal affairs of Syria. Let the case be resolved through Syrian-Syrian dialogue. The best we can do is to prepare the ground for this. We have stated our readiness to host the opposition and the government. At the present one of the ministers of Syria is from the opposition — Dr. Ali Haidar, who is one of the opposition himself. He takes care of the reconciliation ministry, which was recently established, and he’s in Iran to discuss how we can go about bringing the government and the opposition together so that they sit down together and work out a final resolution.

Al-Monitor:  Do you expect support from the NAM countries against the sanctions?.

Salehi:  We want unilateral sanctions refuted by the participants. You cannot claim your eagerness for democracy, human rights and all these things and through unilateral sanctions, try to put all sorts of suffering and hardship to other people. This is a contradiction.

Al-Monitor:  But it’s not unilateral, it’s EU and US?