The Egyptian president's visit to Iran has not pleased his hosts as much as expected, Al-Monitor's Barbara Slavin reports in Tehran. In a speech, Morsi highlighted the Syrian opposition’s struggle against the "oppressive system there," unnerving the Iranians, allies of the Syrian regime. Iranian newscasts omitted key bits in televised coverage. 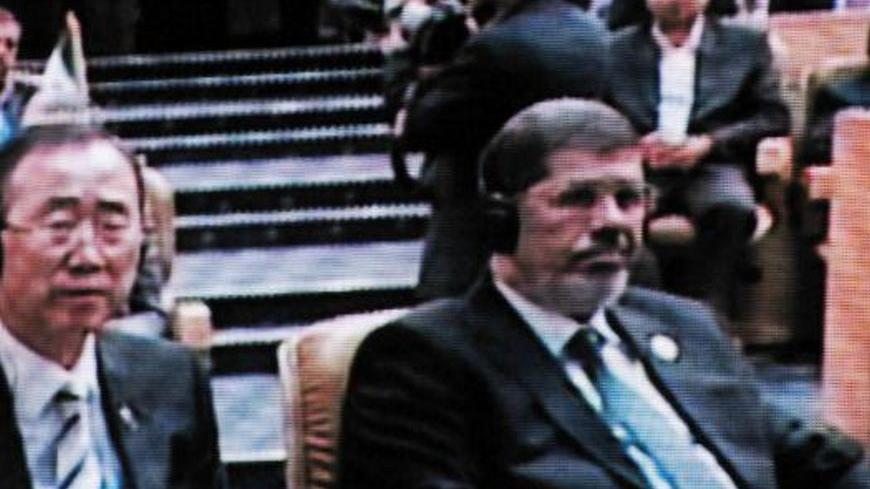 TEHRAN — A resurgent and boldly independent Egypt on Thursday upset Iranian plans for a smoothly-oiled summit that Iranian officials hoped would demonstrate that the Islamic Republic has more friends than foes.

Egyptian President Mohammed Morsi — whose brief trip here was criticized in advance by Israel and the United States — delivered a nuanced speech that targeted some US and Israeli policies but also adamantly backed the Syrian opposition’s struggle to overturn “the oppressive system there.”

However, reporters listening to a simultaneous translation of the speech to the Non-Aligned Movement (NAM) summit heard the Egyptian president — who hails from the Sunni Muslim Brotherhood — refer a half dozen times to the struggle of the largely-Sunni Syrian opposition “for freedom and human dignity.”

“Our solidarity with the struggle of the Syrian people against an oppressive regime that has lost its legitimacy is an ethical duty as it is a political and strategic necessity,” Morsi told representatives of more than 100 nations.

“We all have to announce our full solidarity with the struggle of those seeking freedom and justice in Syria, and translate this sympathy into a clear political vision that supports a peaceful transition to a democratic system of rule that reflects the demands of the Syrian people for freedom.”

“Our hearts are bleeding for the Syrian crisis,” Morsi added. “The bloodshed in Syria is hanging over all of us. It is our responsibility…We have to be totally aware that this bloodshed will not stop if we do not actively intervene.”

Long-time Syrian Foreign Minister Walid Moualem walked out of the hall in protest. Iranian President Mahmoud Ahmadinejad, who sat next to Morsi on the podium, was stone-faced during much of the speech.

Morsi’s comments upset Iranian efforts to portray the summit as a largely anti-American affair and contrasted sharply with those of Supreme Leader Ayatollah Ali Khamenei.

Khamenei, who left before Morsi spoke, did not mention Syria.

He opened the summit with a stinging harangue against “the domineering and aggressive government of America.” While he repeated previous disavowals of nuclear weapons as “a great and unforgivable sin,” the Iranian leader reaffirmed the right of Iran and other developing nations to the peaceful use of nuclear energy.

“Our motto is: ‘Nuclear energy for all and nuclear weapons for none,’ ” Khamenei said.

Morsi and the Iranian leader converged in their criticism of the UN Security Council and Israel and in support for the Palestinians, although their language diverged.

Khamenei inveighed against the “Zionists” and repeated demands for a highly-unlikely referendum in which all inhabitants of Israel and the Palestinian territories — plus the large Palestinian diaspora — would participate to determine the area’s political future.

Morsi, in contrast, called for a “just solution” to the Palestinian issue while criticizing Israel for oppressing Palestinians and mistreating Palestinian prisoners who, Morsi said, are “living in very difficult conditions [deprived of] all human and legal rights.”

Prior to the summit, Iranian officials bragged about Morsi’s visit here as defying the United States and Israel and a harbinger of the end to 30 years of Iranian-Egyptian hostility.

Iranian Foreign Minister Ali Akbar Salehi told Al-Monitor on Tuesday that Morsi’s visit would be a “landmark” even though the Egyptian leader was staying for only a few hours.

Morsi’s remarks suggested that Iranian hopes to restore diplomatic relations — severed after the late Egyptian President Anwar Sadat signed a peace accord with Israel — would not be realized any time soon.

More significant, however, Morsi demonstrated that Egypt is back on the international stage after a long twilight of stagnation and American tutelage.

Speaking in a strong, confident voice, Morsi acknowledged that Egypt is undergoing “a hard transitional period with lots of challenges” since the overthrow of former Egyptian President Hosni Mubarak on Feb. 11, 2011.

However, Morsi said proudly that “Egypt is now a civil state governed by civilians — a constitutional state, a democratic state, a modern state … where the sons of Egypt are fully in charge.”

Morsi was the obvious star of a summit that also drew United Nations Secretary General Ban Ki-Moon. He urged Iran to resolve its nuclear dispute with the international community and gently chided Tehran over its abuses of Iranians’ human rights.

Also present were two black sheep of the international community who are rarely welcomed outside their countries: Sudan’s Omar al-Bashir and Zimbabwe’s Robert Mugabe.

Many of the 120 members of the Non-Aligned group sent lesser dignitaries. The United Arab Emirates sent a relatively obscure member of the country’s supreme council, Sheik Saud bin Rashid al-Mu’alla, while Chile was represented by a vice foreign minister.

Morsi’s comments electrified what had been a humdrum series of preparatory meetings that ended with a communiqué full of pious generalities.

Delegates — especially from the more developed countries among the NAM — looked bored during the earlier proceedings and wandered the halls with pained expressions.

However, many praised the Iranians for organizing what amounted to a diplomatic Olympics.

One diplomat here praised the event as “already a huge diplomatic success” for simply taking place at a time when Iran is facing multilateral sanctions and frequent threats by Israel to attack its nuclear installations.

Barbara Slavin is Washington correspondent for Al-Monitor and a senior fellow at the Atlantic Council, where she focuses on Iran. This is her eighth visit to Iran since 1996. She tweets at @BarbaraSlavin1.