The NAM summit invitation was a catch-22 for Morsi. If he declined, it would have made a strong anti-Iran statement. Choosing to go, however, made Egypt’s neighbors and the US nervous. Ultimately, the Egyptian president went to Tehran, but spoke boldly against the Assad regime, a staunch Iranian ally. With that move, he made all parties both happy and unhappy. 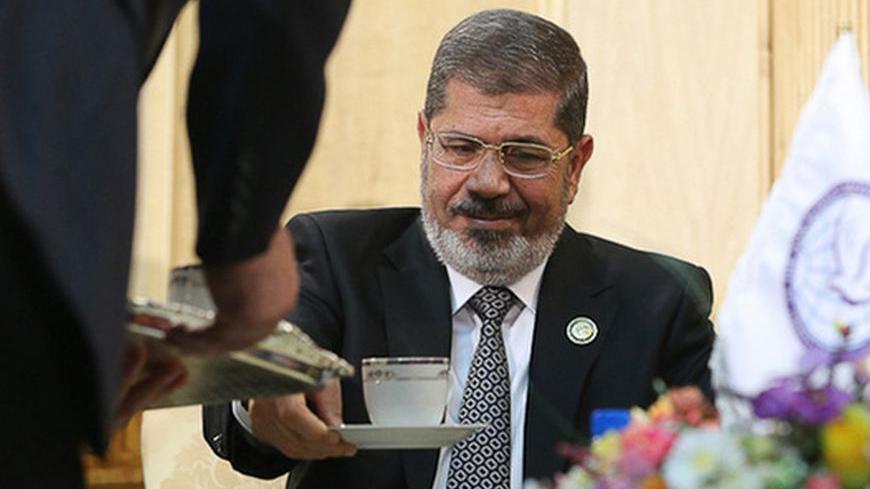 Egypt's President Mohamed Mursi is seen before his meeting with Iran's Executive Vice President Hamid Baghai at Mehrabad airport in Tehran ahead of the 16th summit of the Non-Aligned Movement, August 30, 2012. - REUTERS/Roohollah Vahdati/ISNA
September 1, 2012

This week, the Non-Aligned Movement (NAM) summit in Tehran opened to what some considered rather surprising rhetoric on the Syrian uprising, especially given the context. This demonstrated two things: That Egypt’s newly elected Islamist president, Mohammed Morsi, is conscious of the diplomatic game and will adamantly pursue the independence of Egyptian foreign policy. And that Iran's Islamic regime will stop at nothing to prove that they are not isolated.

In his speech to the opening of the NAM summit, the Egyptian president expressed solidarity with the “struggle of those who are demanding freedom and justice in Syria…” Cue sentiments of support for Morsi’s stance and his trip to Iran. A switch from the criticism he faced after the announcement that he would attend the conference.

The NAM summit invitation was a catch-22 for Morsi. If he had declined, given that he had to hand the presidency of NAM over to the Iranians, it would have been quite pointed; a strong anti-Iran statement. Choosing to go, as he did, was deemed foolish. What better way to make Egypt’s regional neighbors and the US nervous? He would have attracted criticism whether he went or not.

Morsi chose to go to Tehran on his way back from a state visit to China, and only for a few hours (four, to be exact). When invited to stay longer and possibly tour an Iranian nuclear site on the side-lines of the summit, Morsi declined, citing pressing commitments at home. In addition, his spokesperson was at pains to highlight that “no other topic is expected” to be discussed, limiting the interaction between both states.

Morsi chose to go because it was the least contentious thing to do. The Egyptian president is still new to the job. He is trying to gain national and international legitimacy, while distancing himself from the Mubarak regime. He will want to keep all options open, and begin with a balanced foreign policy. In fact, Yasser Ali, Morsi’s spokesperson reiterated this last week when he said, “We need to establish relations with all countries worldwide…” Not going to NAM would have been too strong a statement. Accepting the invitation was a political balancing act — the least-bad option.

But Morsi was also aware of the severe criticism his attendance attracted. He used the opportunity to offer support for the Syrian opposition, a continuation of the wave of uprisings that brought him to power. Doing so while in Iran, an unconditional supporter of Assad, allowed Morsi to reassure the US, Israel and the Saudis he wasn’t against them. Morsi simultaneously signalled that he is not an American stooge or an Islamist revolutionary, and kept his domestic credibility. And all of this while on his way back from a trip to China, where he secured significant economic gains and deepened ties with the country that many in the Middle East consider to be “the big player.” Morsi thus stressed independence of Egypt’s new foreign policy.

In turn, the Islamic regime can tout Morsi’s (and UN Secretary Ban Ki-Moon’s) presence as a diplomatic and PR success; proof that the regime is not as isolated as the West would like it to be. Many now hail both speeches as an embarrassment for Iran. Even some within the Iranian regime panicked, calling Morsi politically immature. But it is likely the Islamic Republic expected some minor negative press, which in their mind, would be an acceptable cost compared with the tangible benefit of having such high profile guests at their summit. The state apparatus will likely jump at the chance to show that despite minor disagreements (on their turf, no less), Egypt and Iran can still be friends. In fact, one Iranian official has already explained that both Morsi and Ban’s comments at NAM, show Iran’s “high tolerance” for criticism. Bingo: Iran got a great photo opportunity and the ability to showcase to the world that it is fine tuning its diplomacy in order to build lasting friendships, despite international impediments.

Dina Esfandiary is a Research Analyst with the Non-proliferation and Disarmament programme at the International Institute for Strategic Studies (IISS). She focuses on the Middle East and on Iran in particular. Follow her on twitter: @desfandiary.