The Morsi presidency could have helped resolve the region’s myriad conflicts if it had achieved reconciliation at home. 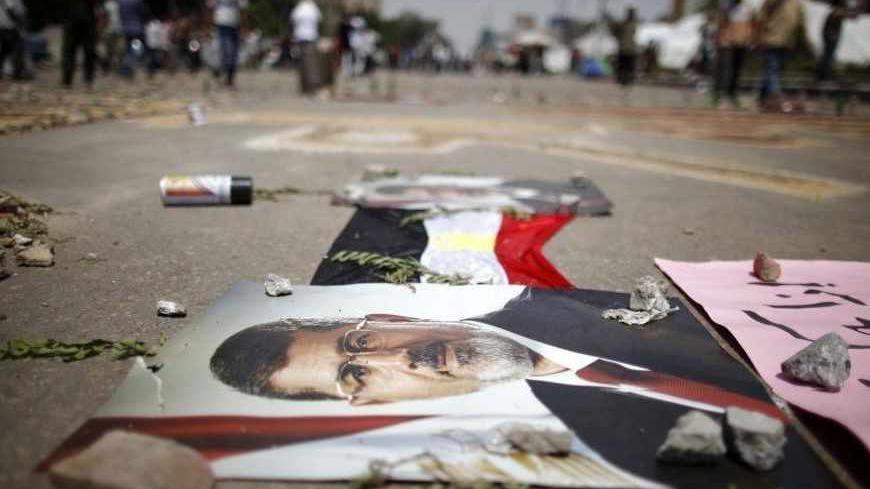 A portrait of deposed Egyptian President Mohammed Morsi is seen on the ground at the Raba El-Adwyia mosque square in Cairo, July 6, 2013. -

The coup against Egypt’s first democratically elected president has plunged the Arab world’s most-populous country into a new spiral of violence and uncertainty. It has also set back hopes that a nation that once led the Middle East in matters of war and peace could reassume a leadership role.

Mohammed Morsi’s international debut began auspiciously in August 2012 when he attended a summit of the Non-Aligned Movement (NAM) in Tehran to pass the presidency of the NAM to the Islamic Republic. Morsi delivered a nuanced speech that criticized the United States and Israel for failing to resolve the Palestinian issue and accused Washington of monopolizing power at the UN Security Council. But Morsi also showed courage before his Iranian hosts by decrying the brutality of the Syrian regime Iran has backed and questioning Syrian President Bashar al-Assad’s continued legitimacy to rule.

Morsi followed this balanced performance by working with US Secretary of State Hillary Clinton to mediate a cease-fire in November that ended a brief war between Hamas and Israel. Clinton lavished praise on the veteran member of the Muslim Brotherhood for persuading Hamas to go along with the deal, adding, “Egypt's new government is assuming the responsibility and leadership that has long made this country a cornerstone of regional stability and peace.”

In hindsight, the Israel-Hamas cease-fire was the high-water mark for Morsi both internally and regionally.

A day after the deal was struck, Morsi issued a decree giving himself and a rump constitutional committee — from which non-Islamists had resigned — authority to draft a lopsided constitution that failed to provide adequate guarantees for women and religious minorities. Morsi’s popularity, which had reached 80% prior to the constitutional power grab, began a steady decline to the barely 30% he held prior to the Wednesday, July 3 coup.

The loss of what could have been a strong moderate Muslim voice in regional affairs is particularly worrisome at a time when the Syrian civil war continues to rage, Turkey is in a funk and sectarianism is on the rise.

With its Islamic roots, close ties to like-minded groups such as Hamas and less adversarial relations than Hosni Mubarak had with other key regional players such as Iran and Turkey, Egypt under Morsi could have been well-placed to mediate conflicts. Indeed, Morsi made an effort to organize peace talks on Syria by creating a quartet with Saudi Arabia, Turkey and Iran and in April sent a top envoy to Tehran to discuss the initiative.

As he lost popularity at home, however, Morsi became increasingly beholden to wealthy countries such as Qatar that have become intensively partisan participants in support of hard-line Islamists in Syria. In his final foray into regional affairs, just a few weeks before he was deposed, Morsi attended a Sunni Islamist conference in Cairo that reeked with anti-Shiite prejudice. Morsi failed to condemn the killings of several Egyptian Shiites, announced that Egypt was severing diplomatic relations with Syria and cast aspersions on Iran, thereby diminishing Egypt’s ability to be a successful intermediary.

It was perhaps too optimistic to hope that Egypt could return to its former grandeur on the regional and international stage while its internal politics remained so unsettled. Under Mubarak, Egypt had lost much of its relevancy and its foreign policy had deteriorated into a cold peace with Israel and strained if nominally normal ties with the United States. Morsi had managed to retain both relationships while beginning to carve out a more independent role.

Morsi’s fall has done perhaps irrevocable damage to the notion that “Islam is the solution” for what ails the countries of the Middle East. But for the region to ever find prosperity and stability, Islamic movements cannot be excluded from politics, and ideally need to find a way to work constructively with secular and other forces.

It is unfortunate that Morsi’s presidency ended not with elections, but with a coup backed by a mob in Tahrir Square. Whoever or whatever succeeds him, the Middle East will clearly have to wait a while longer for the emergence of an authentic leader who can help solve the region’s myriad crises.