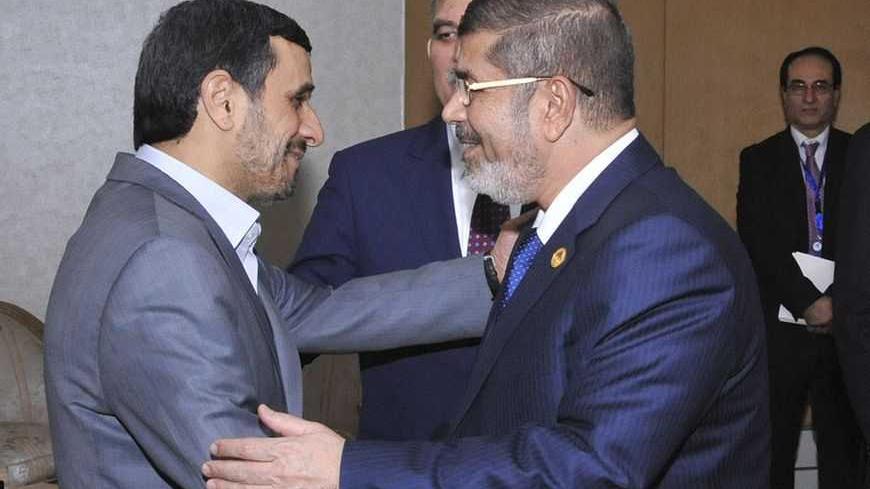 The January 2011 revolution in Egypt changed the nature of Iran-Egypt relations. Unlike the old Egypt under Hosni Mubarak, which perceived Iran as its main threat, the new Egypt seeks close relations with Iran in the broader context of regional cooperation in solving regional issues, such as that of the Syrian crisis. This development may create a new power equation in the region that can potentially redefine the role of global players in the greater Middle East, such as the United States and Russia.

Iran and Egypt enjoy a unique position in the region’s political makeup. Both have a strong historical and cultural background that enrich their national identity, providing them legitimacy and respective leadership roles in affecting new regional settings.

The two nations are also representative of a powerful political-security dimension in the region’s power equations. Each global player ultimately needs one of these two countries to enhance its influence in regional affairs. For instance, Russia has used its traditional ties with Iran to throw its weight in the region, while the United States was largely dependent on Mubarak’s Egypt for a similar role.

Iran and Egypt are also representing two important ideological trends  that have roots in their domestic politics and foreign policy orientations: Iran being representative of Shiite Islamism and Egypt similarly through the Sunni Muslim Brotherhood and Al-Azhar.

Egypt, during the time of Anwar Sadat and Hosni Mubarak, had three features that kept it at a distance from Tehran:

First, it had no interest in employing Islamist ideology in affairs as it viewed Islamism as a challenge to the pillars of a secular government.

Second, Egypt was inclined to play its regional role in the context of the Arab world. For this reason, Egypt sought ownership of traditional Arab issues, such as the Israeli-Palestinian conflict, and prevented other non-Arab regional players, such as Iran and Turkey, to enter what it perceived as its sphere of influence. Such a move would have simultaneously marginalized Egypt’s role. Consequently, Egypt for decades dealt with Iran as a primary rival.

Third, the Egyptian state was shaped within a security-militarized model. The army and security apparatus influenced the country’s domestic politics, such as opposing Islamists, as well as the foreign policy orientation in establishing close relations with the West and Israel.

But the Egyptian revolution is now changing that perception. The establishment of Mohammed Morsi’s Muslim Brotherhood government has introduced the factor of Islamist ideology into Egypt’s domestic politics and foreign policy.

Egypt’s traditional foreign policy, which was based on building close relations with the United States and Israel, is gradually shifting to a more nationalistic and independent approach. Morsi’s government is now showing more willingness to engage regional powers like Iran and Turkey. This tendency is clearly shown in mitigating regional problems, such as that of the Syrian crisis.

These new dynamics have affected the nature of Iran-Egypt relations, providing a momentous opportunity for both states to strengthen comprehensive relations.

Enhancing relations with Egypt has been a constant priority in Iran’s regional policy, dating back to the shah’s reign and continuing into the Islamic Republic. From Iran’s perspective, improved relations with Egypt are essential to regional stability, and part of the need to push for a "regionalization" of Middle Eastern issues, and thus constraining the influence of global powers. As the cases of Iraq and Afghanistan demonstrate, the “internationalization” of regional issues only endangers regional peace, if the proliferation of jihadi movements from the two wars is any indication.

Iran and Egypt’s insistence to seek a political solution for the Syrian crisis also stems from a mutual desire to avoid Western military intervention, while simultaneously playing leading regional roles in solving the crisis.

Increased relations with Egypt are based on a mutual strategic need, and mostly on these two countries’ geopolitical significance in the Middle East.

Iran is the dominant power in the east of the Middle East, in an area that stretches from Iraq and the Persian Gulf to Afghanistan, South Asia, and the Caspian basin. These regions are the center of the world’s energy production, economic and financial exchanges, labor force and commerce. The main theme in this part of the Middle East is development, prosperity, and energy security. In this respect, Iran is a good source for connecting Egypt to the hub of energy and economic activities in the Persian Gulf and the Caspian Sea, and through Iraq and Syria, to the region’s key security issues, outweighing other regional rivals like Israel.

Similarly, Egypt is the dominant power in the west side of the Middle East. Egypt is the gate to north and central Africa and the south Mediterranean. It has access to strategic regions, such as the Suez Canal and Red Sea, which are all vital to Iranian interests. Egypt’s decision to permit Iranian battleships to cross the Suez Canal and access the Mediterranean increased Iran’s regional power status, and remains an important gateway for Tehran. Egypt also provides Iran with an avenue to access key Arab issues, such as the Israeli-Palestinian conflict, and bypass Tehran’s main regional Arab rival, Saudi Arabia.

In addition, Iran and Egypt share common strategic interests in other regional issues such as comprehensive nuclear disarmament in the Middle East, combatting extremist trends and civil wars — particularly in the Levant — and preventing further international military intervention in the region. Furthermore, the two countries are interested in expanding economic relations. Egypt recently agreed to allow $5 billion worth of Iranian investments, which will create at least 6,000 jobs.

Although some secular remnants of Egypt’s previous regime still believe that improved Iran-Egypt relations will favor Tehran more than Cairo – and are subsequently sabotaging any attempts to establish close relations with Iran — signs show that this view is inevitably changing and the new Egypt gradually believes that strengthening relations with Iran will preserve its geopolitical interests.

The two nations are at probing to finding the best approach to the points of difference in their relations, and have so far avoided any serious ideological clashes. This was evident in the Morsi government’s watering down of Al-Azhar’s public criticism of President Mahmoud Ahmadinejad during the latter’s recent visit to Egypt. Likewise, Iran largely ignored the highly publicized rhetorical statements against the Syrian regime during Morsi’s visit to the Non-Aligned Movement summit in Tehran last year. Neither side, it seems, wants to get bogged down in any ideological rift, and prefer to focus on mutual strategic interests.

With increased Iran-Egypt relations at state level, a new power equation could emerge in the region that will shape the future balance of power in the greater Middle East. This relationship will strengthen the nation-state system in the Middle East against threats of fragmentation — as seen in the Levant. An Iranian-Egyptian regional partnership could also diminish the role of global actors while enhancing regional cooperation under the principles of regionalism. This will strengthen regional approaches to solving regional issues, and consequently encourage peace and stability in the Middle East.

Kayhan Barzegar is director of the Institute for Middle East Strategic Studies in Tehran and former research fellow at Harvard University. He is also chairman of the Department of Political Science and International Relations at Science and Research Branch of the Islamic Azad University in Tehran.