At Non-Aligned Helm, Iran Will Drive Its Own Agenda

Iran sees its chairmanship of the Non-Aligned Movement as a three-year window of opportunity to pursue several goals through its signature blend of pragmatic and subversive foreign policies: defeat international sanctions, resolve the Syrian conflict to its advantage and win support for its nuclear agenda, writes Banafsheh Keynoush. 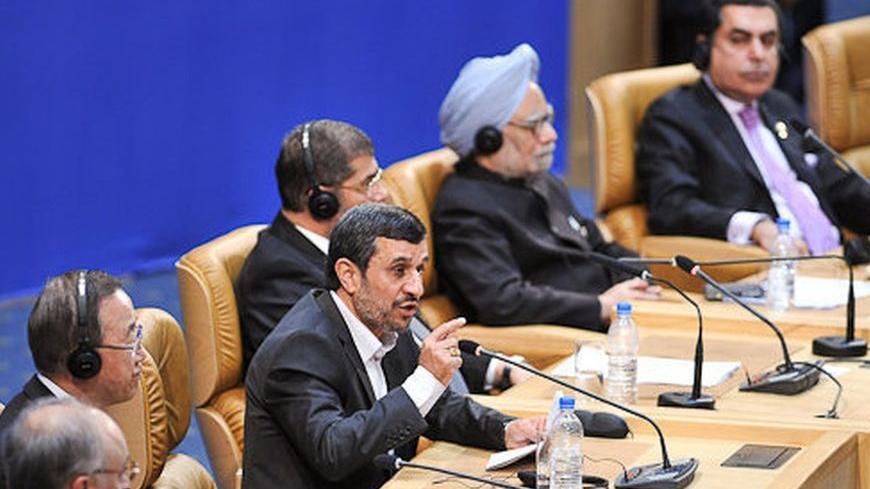 Last week, Iran hosted the Non-Aligned Movement (NAM) summit. The movement’s rotational chairmanship passes on to Iran for three years and then to Iranian allies Venezuela and Bolivia. Iran will use NAM to pursue its signature combination of pragmatic and subversive policies in three main areas: to resolve the Syrian crisis, break the international sanctions against its oil industry, and assert its nuclear program.

The NAM chairmanship could help thwart US efforts to deny Iran a friendly government in Damascus. As early as September 2010, Iranian President Mahmoud Ahmadinejad asserted that the United States was “up to some mischievous actions” in Syria and that Iran aimed to support its friends there. Through NAM, Iran will push for a collective regional solution to ensure its interests in Syria.
A day after NAM wrapped up, Iran established the Friends of NAM Working Group on Syria, which included itself, Egypt and Venezuela. In this regard, Mohammed Morsi’s agreement to attend NAM, to pass to Iran the chairmanship which Egypt held, was critical. Morsi represents the Arab voice on the question of Syria’s fate and can bridge Iran and Arab views.
The Arab League seems to have come around, 18 months into the Syrian conflict, to accepting a role for Iran in Syria. In August, Saudi King Abdullah invited Ahmadinejad to an Islamic summit in Mecca to find ways to prevent the outbreak of Syrian civil war. The Iranian Foreign Minister Ali Akbar Salehi said President Morsi forwarded a proposal after Mecca that Egypt, Iran, Saudi Arabia and Turkey should lead the peace efforts in Syria, and that Iran will complement the initiatives. King Abdullah’s son and deputy foreign minister, Prince Abd al Aziz, attended NAM to reaffirm the kingdom’s Mecca commitment.
Iran and the league will have their disagreements. Iran claims Saudi Arabia has told the United States that if it attacked Syria, the kingdom will ensure stable oil prices. If true, this does not mean the kingdom will reject its Mecca commitments, but that it aims to keep options open. The Information Office of the Iranian Revolutionary Guards Corps vowed, in return, to send troops to Syria if America intervened. While in Tehran, Morsi compared the plight of the Syrian people to the Palestinians, prompting Iranian national television to censor portions of his speech. To get back at him, Iranian state media reporters claimed that Morsi said the Bahraini crisis was an Arab Spring. Egypt’s foreign ministry rejected that assertion.
Regardless of the verbal wrangling, the Arabs and Iran agree that a region-wide solution is required to end the Syrian conflict and that NAM is a useful tool to build some consensus.
Iran will circumvent international sanctions by reaching out to NAM markets for Iranian oil and gas. Some of Iran’s most critical customers are countries such as the Central Asian republics, the African states and India. Indian Prime Minister Manmohan Singh attended NAM because India is committed to a non-interventionist foreign policy to guarantee energy security in the Persian Gulf. For this purpose, India wants Iran and its Arab neighbors to remain non-hostile by ensuring regional security. Iran’s Oil Minister, Rostam Ghasemi, stressed that talks between Iran and India on energy issues on the sidelines of NAM were tentative and that the results remain to be seen. But since Iran frequently negotiates below-market-price deals, it could mean that it may not be short of customers during a global recession.
Iran will try to rally NAM to demand reforms in the UN Security Council to assert its nuclear rights. The council has passed a series of tight sanctions against the Iranian nuclear program. Iran will lobby with the NAM Caucus in the Security Council to assert its peaceful right to nuclear enrichment and its vision for a nuclear-free Middle East. While the caucus members have not always supported Iran, Iran will aim to show that it should not be singled out as long as Israel possesses nuclear weapons.
Iran will celebrate chairing NAM for three reasons. First, although NAM will not change the international power equation in favor of Iran, for a country that has battled isolation for over three decades, Iran's leading the body is a sign of victory.  Second, NAM cannot prevent a military strike against Iranian nuclear sites, but with support of a majority of NAM members, Iran could make military action look like unwarranted aggression. Third, a new Iranian president can use NAM to leave behind the pitfalls of Ahmadinejad’s hostile presidency and, if lucky, make a new mark in Iranian foreign diplomacy.
Former Iranian nuclear negotiator Hassan Rowhani compared NAM to riding a bicycle to get messages across to the international community. Iranians are not the best cyclists, but they are masters of finding shortcuts to increase the bicycle’s overall performance.
Banafsheh Keynoush is U.S.-based independent scholar and private-sector consultant.