As host of a summit of non-aligned countries, Iran hopes to prove that it has more friends than enemies at a time of multiplying sanctions and Israeli threats to attack its nuclear installations, writes Barbara Slavin from Tehran. One test of the conference's success from Iran’s point of view is how many heads of state actually show up. 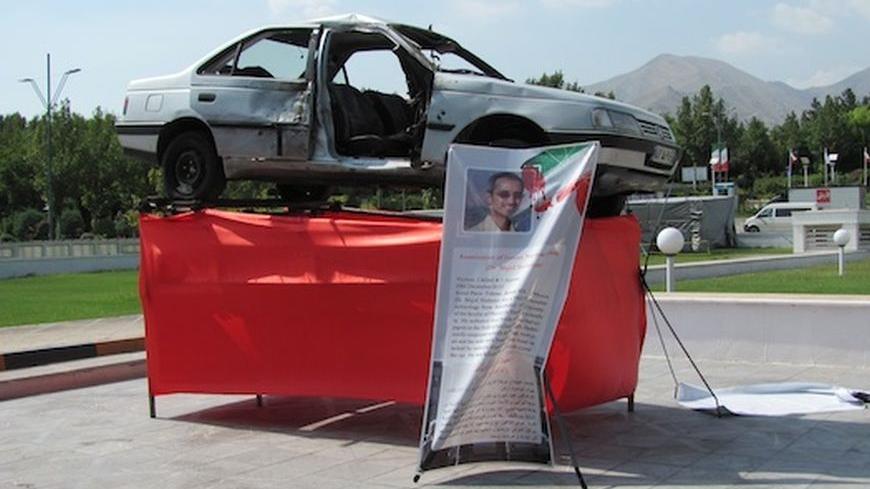 The wrecked car in which an Iranian nuclear scientist was killed is displayed atop a platform at the Islamic Republic of Iran Broadcasting Conference Center, Tehran August 27, 2012. - Barbara Slavin

TEHRAN — Iran is using its position as host of a summit of non-aligned countries to underline its right to nuclear energy and to remind the world that Iran has also been the victim of terrorism.

Tehran is festooned with colored lights, security personnel and placards hailing the non-aligned grouping — which originated in the days of East-West Cold War divisions — as “a symbol of independence throughout the world.”

Other posters and banners proclaim “nuclear energy for everyone” — a pushback against six UN Security Council resolutions and innumerable US and European sanctions that penalize Iran for enriching uranium and failing to answer questions about possible military dimensions of its nuclear program.

The most graphic display confronts visitors to the Islamic Republic of Iran Broadcasting Conference Center. There, atop platforms draped in blood-red fabric, are the mangled cars in which three Iranian nuclear scientists were killed in recent years. Israel has been blamed for the assassinations, in which magnetic bombs were attached to the windows of the cars the scientists were driving as they commuted through Tehran’s congested streets. Beside the cars are posters with pictures of the dead men and the circumstances of their deaths.

Inside the hall, reporters must run a gauntlet of posters describing other terrorist attacks against Iranian officials since the days of the 1979 Islamic Revolution. Many of them are devoted to the crimes of the Mujahedin-e Khalq, a radical group that lost out in the post-revolution power struggle and that has been lobbying aggressively to get off a US State Department list of terrorist organizations.

Iran is also on the terrorist list, for its support of groups such as Hezbollah. However, at the conference center, banners declare: “Iran the Patron of Terror Victims [throughout] the World” and “Iran, the Greatest Victim of Terrorism, the Pioneer in Counter Terrorism.”

Beyond showcasing its victims and its right to nuclear energy, Iran hopes that the summit will prove that it has more friends than enemies at a time of multiplying sanctions and frequent Israeli threats to attack its nuclear installations. Or, as the Tehran Times put it Monday, “the fact that Iran is hosting such a prestigious meeting has proven that the efforts of Western countries, and especially the United States, to isolate Iran are futile.”

One test of the conference's success from Iran’s point of view is how many heads of state from among the 120 non-aligned nations actually show up. Iran has made much of the fact that Mohammed Morsi, Egypt’s new Muslim Brother president, is attending, although Morsi’s spokesman, Yasser Ali, said Monday that Morsi would come for only a few hours and would hold no bilateral meetings with Iranian officials. That presumably means that Morsi will not visit Iran’s only electricity-generating nuclear reactor at Bushehr, despite Iranian claims to the contrary.

Meanwhile, the official Islamic Republic News Agency said that the only Palestinian official invited to the summit was Palestinian Authority President Mahmoud Abbas. That suggests that Ismail Haniyeh, the leader of Hamas, which Iran has supported with money and arms in the past, may have rejected an Iranian invitation. If so, that would underline the deepening sectarian split in the region between Sunni Muslim countries opposing the Syrian government and Shiite Iran, Hezbollah and Iraq, which support the Assad regime. This split has diminished Iranian influence since it peaked in 2006, when the US was still bogged down in Iraq and Hezbollah emerged bloodied but unbowed from a month-long confrontation with Israel.

One Western analyst in Tehran told Al-Monitor that the summit was “already a huge diplomatic success” just by giving Iran a chance to showcase its points of view.

But there are risks, too, for Iran's leadership in using the non-aligned forum to showcase its international defiance on the world stage, noted Iran scholar Mehdi Khalaji.

"Emphasizing the nuclear impasse and the Syrian war may lead many Iranians to conclude that his [Iranian Supreme Leader Ayatollah Ali Khamenei's] foreign policy is the main cause of their economic woes," Khalaji wrote in an analysis for the Washington Institute for Near East Policy.

Hooshang Ahmirahmadi, president of the American Iranian Council, said the event reminded him of a Persian proverb: “It makes the heart happy, but doesn’t put food in the mouth.”

“At the end of the day it will not change much,” Ahmirahmadi said. “The countries that are attending are observing the sanctions.”

Barbara Slavin is Washington correspondent for Al-Monitor and a senior fellow at the Altantic Council, where she focuses on Iran.