The signing of a deal after three weeks of final negotiations has diplomats hailing a "win-win" solution. 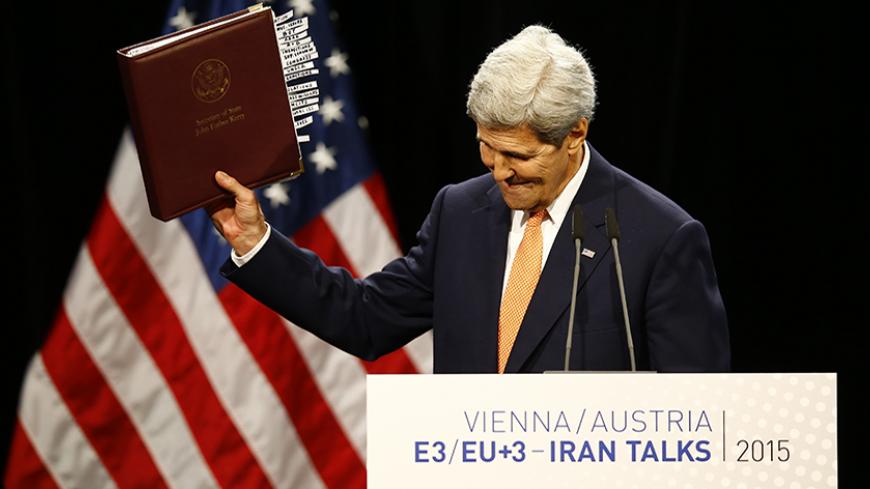 US Secretary of State John Kerry reacts as he delivers a statement on the Iran talks deal at the Vienna International Center in Vienna, July 14, 2015. - REUTERS/Leonhard Foeger

VIENNA — After nearly three weeks in Vienna this round, two years of intensive negotiations and two major extensions of an interim deal, Iran and six world powers were finally able to strike a final nuclear deal in the early morning on July 14. By the time one senior US official shared the news with his colleagues after midnight July 14, they were too tired to be triumphant, he said.

But American, European and Iranian diplomats rallied after a couple hours of sleep to express the hope that the nuclear agreement announced July 14 would not only be durable in reassuring the international community that Iran is not seeking a nuclear weapons capability, but that the successful nuclear negotiations could help open a new chapter in relations between Iran and the international community after a tense decade fraught with hostility and mistrust.

“It is a great honor for us to announce that we have reached an agreement on the Iran nuclear issue,” European Union foreign policy chief Federica Mogherini said at a joint press conference announcing the historic deal with Iranian Foreign Minister Mohammad Javad Zarif July 14.

“We delivered on what the world was hoping for: a shared commitment to peace and to join hands in order to make our world safer,” Mogherini said. “This is a historic day, creating conditions for building trust and opening a new chapter in our relationship.”

“I express appreciation for those who started and continued this process in order to reach a 'win-win' solution and overcome what we view as an unnecessary crisis,” he said at the top of the final plenary meeting between Iran and the five permanent members of the UN Security Council plus Germany (P5+1) ahead of the agreement’s announcement July 14.

“What we could accomplish is an important achievement for all of us,” Zarif said. “Now we are starting a new chapter of hope.”

“Confidence is never built overnight,” US Secretary of State John Kerry told a press conference in Vienna July 14. “It has to be developed over time.” He added, “This morning, Iranian Foreign Minister Javad Zarif expressed the hope that this agreement could be the beginning of a change of interactions between Iran and the international community.”

Both Iran and the United States were at pains to show that the parameters of the final deal — whose formal name is the Joint Comprehensive Plan of Action — met their security demands, while rejecting accusations from domestic political critics that they had made excessive concessions to the other side.

But Kerry said the agreement was also about more than the technical details. “The true measure of this agreement is not whether it meets all the demands of one side, … [but] if it leaves the world safer than without it.

“Our quarrel has never been with the Iranian people,” Kerry said. “We realize how deeply the nuclear related sanctions have affected the lives of Iranians. Thanks to the agreement reached today, that will begin to change.”

Rejecting criticism that if the United States had applied more pressure, Iran could have been forced to succumb to a tougher deal, Kerry said experience had proved that wasn’t the case. Iran’s nuclear program had grown from fewer than 200 centrifuges in 2003 to thousands of centrifuges during the decade in which the international community demanded it entirely halt domestic uranium enrichment.

Kerry also shared his personal experience of graduating from college and then serving in the Vietnam war. “I learned the price of when diplomacy fails,” Kerry said. “I believe this agreement represents … the US and all the P5+1 [coming] together with Iran to avert the inevitability of conflict that would come were we not able to reach agreement.”

Kerry also expressed deep respect fo the Iranian negotiating team, particularly his counterpart, Zarif. “I want to express my deep respect for the serious and constructive approach that Iran’s representatives brought to our deliberations,” Kerry said. “The president of Iran had to make a difficult decision.” He added, “Foreign Minister Javad Zarif is a tough, capable negotiator, a patriot, a man who fought every inch of the way for the things he believes. … There were sometimes heated and passionate exchanges.”

Zarif was “tough, but always professional, [in helping to] find solutions to difficult problems,” Kerry said. “We were both of us able to approach these negotiations with mutual respect.”