Iran and six world powers announced a more detailed political agreement for a final Iran nuclear accord than was expected after turbulent nuclear talks. 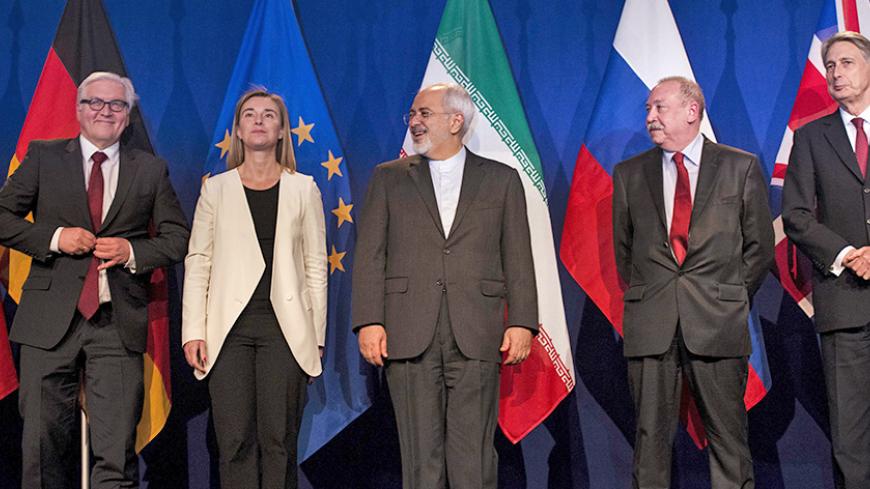 Lausanne, Switzerland — Iran and six world powers announced a far more detailed political agreement for a final Iran nuclear deal than had been expected to emerge from marathon nuclear talks that negotiators described as a turbulent, emotional rollercoaster.

We have “succeeded in making history,” Zarif said at a press conference here April 2. “If we succeed, it is one of the few cases where an issue of significance is solved through diplomatic means.”

We have “reached a historic understanding with Iran, which, if fully implemented, will prevent it from obtaining a nuclear weapon,” US President Barack Obama said from the White House rose garden after the deal was announced April 2.

Iran and the P5+1 — the five permanent UN Security Council members plus Germany — “have reached solutions on key parameters” that will form the foundation for reaching the detailed final Iran nuclear accord due to be completed by the end of June.

“Today we reached a critical milestone,” US Secretary of State John Kerry said at a subsequent press conference.

Among the measures agreed, several that lengthen Iran’s potential “breakout” — the amount of time it takes to produce enough fissile material for one nuclear weapon — to at least one year, from the current assessment of two to three months, for a decade or more.

Among those measures, Kerry and Mogherini announced: Iran will conduct uranium enrichment only at one site, Natanz; will cap its enrichment level at 3.5% (suitable for energy); reduce the number of its centrifuges for 10 years to 5,000; and dramatically reduce the size of its stockpile of low enriched uranium to a few hundred kilograms, either by dilution or shipping it out to sell on the open market. Iran will transform the underground Fordo enrichment site into a research facility that conducts no enrichment and has no fissile material. An international joint venture will help redesign and modernize the uncompleted Arak heavy water research reactor to reduce proliferation concerns; Iran will ship out any plutonium produced and never have a reprocessing facility. Iran will implement the Additional Protocol giving increased access to International Atomic Energy Agency (IAEA) inspectors.

In return for the IAEA verifying Iran has conducted the measures agreed, the six world powers agreed to waive US and European banking and oil sanctions in a phased manner, and will eventually lift UN Security Council resolutions passed on Iran for proliferation related reasons.

“We have decided to take steps to assure anybody who had concerns … that our program is exclusively peaceful, and will always remain peaceful,” Zarif said, describing the outcome as “win-win,” and praising the work of every delegation.

The political understanding reached is a “very interesting, integrated deal that will satisfy some of Iran’s requirements, but certainly meets our requirements over a long period of time,” a senior US administration official told reporters on a White House call April 2.

Kerry acknowledged at the press conference that there were still a couple gaps that had yet to be fully resolved.

“Of course, we have acknowledged there are some gaps, issues that we have to resolve,” he said. “We have to finish dealing with Fordo in some respects, its transition” from an enrichment site to a research facility. The rate and timing of sanctions relief are also not fully agreed, he said, adding “it doesn’t serve our purpose to go into that now.”

But he challenged critics of a deal to drop the “sound bites” and recognize a strong diplomatic resolution is the best way to ensure Iran not obtain a nuclear weapon.

“Simply demanding Iran capitulate makes a nice sound bite, but it is not a policy; it is not a realistic plan,” Kerry said. “Success is not whether [the deal] meets all the desires [of one side]. The test is whether it leaves the world safer than without. The comprehensive plan of action we are moving toward more than meets that test.”

One senior administration official said there had been "lots of up and down moments" during the negotiations and "a lot of brinkmanship."

The official spoke of "having our hopes dashed" and of Energy Secretary Ernest Moniz saving the day through his "technical creativity" but gave no specifics. This official called the process "the most complex negotiation I've ever been part of."

Another senior administration official said that for the past three days, there had been moments when they thought they could finish the framework but that various unspecified issues intervened.

The official said that 'we have been in touch with many dozens of members of Congress over the past few days" briefing them on the progress of the talks. He said the administration is "open to discussion with Congress about how it plays an oversight role" although the parameters released by the White House doesn't mention that.

Senate Foreign Relations Committee chairman Bob Corker, R-Tenn., whose committee is due to vote on legislation that would give Congress 60 days to approve a final agreement, was skeptical. He said in a statement that the Obama administration should not “bypass Congress and head straight to the UN Security Council” but give Congress a chance to “weigh in” on a deal. He also said the United States "must remain clear-eyed regarding Iran’s continued resistance to concessions, long history of covert nuclear weapons-related activities, support of terrorism and its current role in destabilizing the region."

Barbara Slavin contributed to this report.