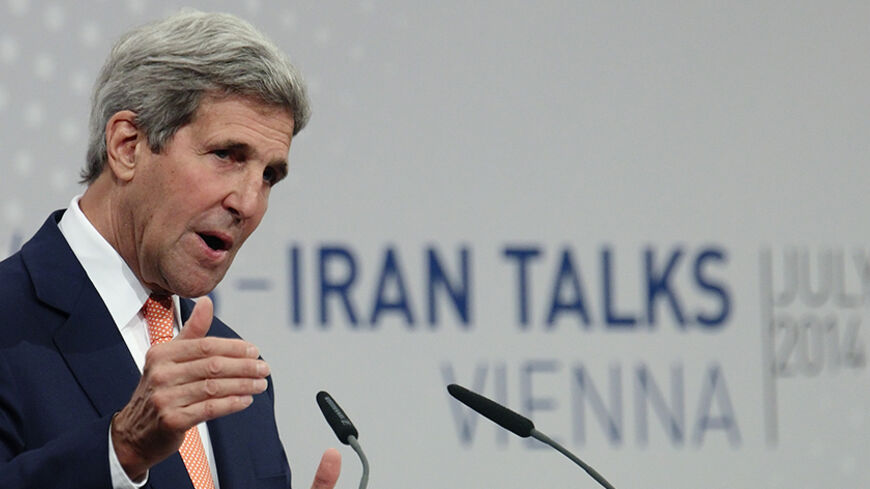 US Secretary of State John Kerry speaks during a news conference in Vienna, July 15, 2014. - REUTERS/Heinz-Peter Bader

Vienna — Secretary of State John Kerry said July 15 that there has been “tangible progress" made in marathon Iran nuclear talks underway here, but gaps remain, and he would be returning to Washington to consult with President Barack Obama and Congress about the way forward, including the possibility of extending the talks.

“We have made progress,” Kerry told journalists at a press conference here July 15. “But after my conversations with Iran and our partners, it is clear we still have more work to do.”

“We are going to continue to work with the belief that there is a way forward,” Kerry said. “But … while there is a path forward, Iran needs to choose to take it.”

Iran’s Foreign Minister Mohammad Javad Zarif said Iran is ready to reach a durable agreement that will provide the international community verifiable assurances that Iran’s nuclear program remains peaceful. But Iran insists that it be given the choice to eventually produce the fuel for the Bushehr power plant, although “not tonight or tomorrow,” he said.

Iran wants to “reach an agreement, to arrive at a solution everyone can be happy about,” Zarif told journalists at a press conference July 15, after three days of talks with Kerry.

“We will continue to negotiate … and on Sunday [July 20], we will decide if we have enough for an agreement,” Zarif said. “As we stand now, we have made enough headway to be able to tell to our political bosses back home … it’s worth it to continue the process."

The six world powers (P5+1), concerned that industrial-scale enrichment could give Iran a quick breakout capability, wants Iran to have a limited enrichment capacity of a few thousand centrifuges and continue to buy its nuclear fuel from Russia, at least for the duration of a final agreement, until international confidence is restored.

Iran has offered to limit its enrichment capacity to current levels for up to seven years, Zarif told The New York Times in a report published July 15.

Kerry, notably, praised the importance of the Iranian Supreme Leader Ayatollah Ali Khamenei’s fatwa against nuclear weapons, and suggested the clerical prohibition could be codified into a verifiable agreement that would ensure Iran’s nuclear program remain exclusively peaceful. Kerry’s unusual olive branch to Khamenei seemed possibly intended to help the Iranian negotiating team try to invest the supreme leader in final deal terms that might otherwise be unacceptable to the 76-year-old clerical leader who has expressed unstinting skepticism about Western intentions toward the Islamic Republic.

“We take [Khamenei’s fatwa] very seriously,” Kerry told journalists on July 15. “A fatwa issued by a cleric is an extremely powerful statement about intent. Our need is to codify it.”

Iran analysts said both Zarif and Kerry were trying to cautiously build the public case for more time by highlighting some progress made and increased flexibility being shown by the other side.

“Both parties were trying to do damage control after a few days of public posturing,” Ali Vaez, senior Iran researcher at the International Crisis Group, told Al-Monitor July 15. “Preserving the positive momentum is an imperative of any extension.”

“Iran is being more flexible,” Kelsey Davenport, analyst with the Arms Control Association, told Al-Monitor. Regarding Zarif’s reported proposal in The New York Times to hold Iran’s enrichment capacity at current levels for up to seven years, Davenport said while it’s not likely to be acceptable to the P5+1, “it is still very much a shift in the rhetoric.”

Whether Congress will be convinced the flexibility shown by Iran in the negotiations to date is sufficient to warrant an extension with no threat of new sanctions is unclear.

Rep. Elliot Engel, ranking Democratic on the House Foreign Affairs Committee, expressed himself unimpressed with the reported Iranian proposal to hold its enrichment capacity steady until 2021.

“After six months of negotiations, I’m disappointed that the Iranians continue posturing rather than working toward a real solution,” Engel, D-N.Y., said in a statement July 15. “Mr. Zarif’s proposal doesn’t give negotiators much to work with.”

But Western negotiators say the difference this time compared to a year ago is the real determination of both sides to get an agreement. We need to get from point A to point B, one diplomat said. We don't know yet how we're going to get there, but the determination to do so makes a lot of difference.

Iran's desire to expand its nuclear energy production within seven years is in part based on the amount of time Iranian President Hassan Rouhani would be in office if he wins a second term, an Iranian official told Al-Monitor.