Secret US-Iran diplomatic contacts got underway after US President Barack Obama conveyed a message that the United States would be prepared to accept limited Iran enrichment program in a serious nuclear agreement. 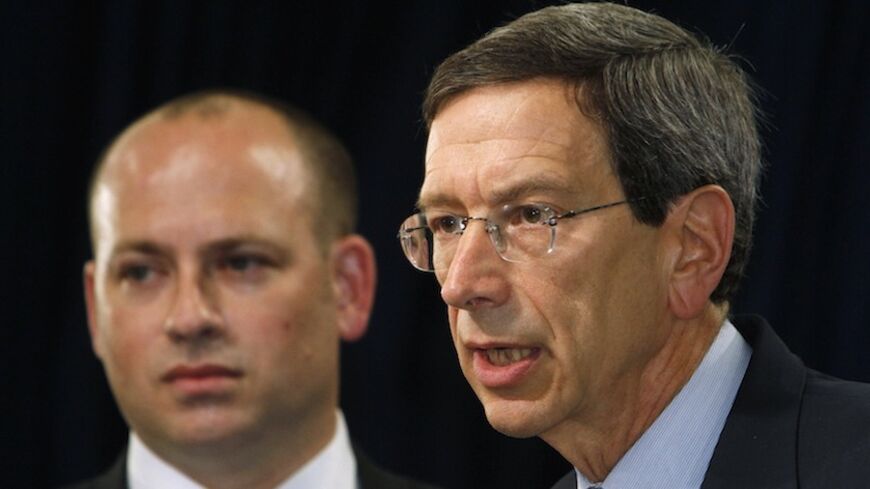 Then-US special adviser for nonproliferation and arms control Robert Einhorn (R) speaks during a news conference at the US Embassy in Seoul, Aug. 2, 2010. -

Vienna — The secret US-Iran diplomatic channel that helped advance the interim nuclear deal last year got underway after a message from US President Barack Obama was conveyed to Iran: The United States would be prepared to accept a limited Iranian domestic enrichment program as part of a nuclear agreement in which Iran would take concrete and verifiable steps to assure the world its nuclear program would remain exclusively peaceful.

“Basically it was to inform Iran that we are prepared to accept a limited enrichment program in the context of an otherwise acceptable deal,” former US-Iran negotiator Robert Einhorn told Al-Monitor in an interview July 13. “It was not a specific quid pro quo.”

Now, as negotiators from Iran and the six world powers (P5+1) pursue marathon nuclear talks here to try to reach a final nuclear accord by the July 20 deadline when the interim deal expires, the United States believes that US concession, and the successful interim deal it helped bring about, should help persuade Iran to significantly delay, if not abandon, its desire for a large-scale enrichment program for the sake of reaching a comprehensive nuclear accord.

“I think that the United States has already made a number of very tough choices," a senior US administration official, speaking not for attribution, told journalists at a briefing in Vienna July 12. In the six-month interim Iran nuclear deal, the Joint Plan of Action (JPOA), "the President of the United States took, I think, a very bold decision to say that we would be open to discussing a very limited enrichment program to meet the practical needs of Iran.”

“The good news of the JPOA,” the senior US official continued, is that “it shows that in fact, we can each take difficult decisions to try to reach an agreement. Now we’re talking about a comprehensive agreement. And we’re talking about the very heart of Iran showing the international community, not just with its words … [but with] concrete actions” that it does not seek a nuclear weapons capability.

Obama’s message that he would be prepared to accept a limited Iranian enrichment program in an otherwise acceptable deal was conveyed to Iran at a secret meeting in Oman in March 2013, by a US delegation led by Deputy Secretary of State Bill Burns, which also included Jake Sullivan, now Vice President Joe Biden’s national security adviser, as well as Einhorn and then-White House Iran adviser Puneet Talwar. Both Burns and Sullivan are currently accompanying lead US Iran nuclear negotiator, Undersecretary of State Wendy Sherman, to negotiations underway here in Vienna since July 2, as the P5+1 and Iran aim to see if they can reach a final nuclear deal later this month, or will need more time.

Secretary of State John Kerry and the British, French and German foreign ministers traveled to Vienna Sunday to gauge progress in the talks, and see if they can help move it forward. The European foreign ministers departed Sunday night, but Kerry was planning to stay on for further meetings, including with Iranian Foreign Minister Mohammad Javad Zarif, on Monday.

“We had great discussions, but it’s only just begun,” Kerry said following his meeting with Zarif here July 13.

“We have always said that if we can make some significant progress, that if we thought we needed some additional time, we thought the world would probably want us to take it, and to get to a final agreement,” the senior US official said. “What the ministers are coming here to do is to assess whether, in fact, we have made and are making … enough progress.”

Indeed, "some progress" has been made toward a final deal in recent weeks, US and European officials said. The Iranians have shown flexibility in areas, including on possible modifications to reduce proliferation concerns about the uncompleted Arak research reactor, the prospective conversion of the underground Fordo enrichment site into a research and development facility, and on reducing its stockpile of 3.5% enriched uranium, US officials note.

The major, but not only, sticking point to a deal concerns Iran’s desire to maintain its current enrichment capacity and expand it over time, US negotiators say.

The United States and its P5+1 partners believe that Iran has no legitimate need for industrial scale enrichment for its power needs, in the next decade or two, if ever. That is because Russia has a contract to provide fuel for the Bushehr power reactor through 2021, and is willing to extend the contract for the life of the reactor, as is standard industry practice. Iran’s enrichment capacity should be based on its real, practical needs, which are limited in the near and medium term, US negotiators say. After the duration of a comprehensive deal — another issue to be negotiated in the talks, but which the US official said should be a 'two digit" number of years, while the Iranians say it should be shorter — Iran can decide if it wants to buy fuel for its power program from abroad or produce it domestically, US officials say.

The Iranians “have no compelling, near term need for a large scale enrichment program,” Einhorn told Al-Monitor. “In fact, it makes little economic sense for them to try to produce fuel for their power reactor. It’s even questionable [if] they would be able to fabricate fuel for the Bushehr reactor without Russian assistance.”

Because "it makes little economic or technical sense for them to try to produce fuel for power reactors at this stage," Einhorn said, "the international community may question why they are so insistent on doing so, and will wonder whether they have the ulterior motive of ensuring they would have a very short breakout capability.”

But Zarif, speaking to NBC's Meet the Press, echoed Obama when he noted the best way to ensure Iran not pursue a nuclear weapons capability is by a negotiated agreement, rather than insisting on the terms of a perfect agreement that may be unobtainable.

“As somebody who has worked all his life for nonproliferation I can tell you that the best way to ensure that Iran … will never break out, is to allow an internationally monitored nuclear program,” Zarif told NBC Meet the Press’s David Gregory in an interview aired July 13.

“Because we have the technology. We have the know-how. We have the equipment,” Zarif said. “So the only way, realistically, to deal with this, is to have a genuinely peaceful program that can be worked in a transparent fashion, without the need for the imposing arbitrary restrictions.”

The United States agrees that there should be a path for Iran to be able to exit its rogue nuclear status, if it's prepared to do so. But Iran should accept that, given that for the past decade it has been found in violation of its obligations under the nuclear Non-Proliferation Treaty (NPT) and UN Security Council resolutions, “for some period of time … it is going to have a very limited, very constrained program that will have inspections, verification, monitoring and a lot of limitations on what they can do,” the senior US official said. “At the end of that duration, they will be like any other … nuclear non-weapons NPT state and will make their own choices.”

“It’s going to take them some time to get there,” the US official continued. “But there is a path for them to do so.”