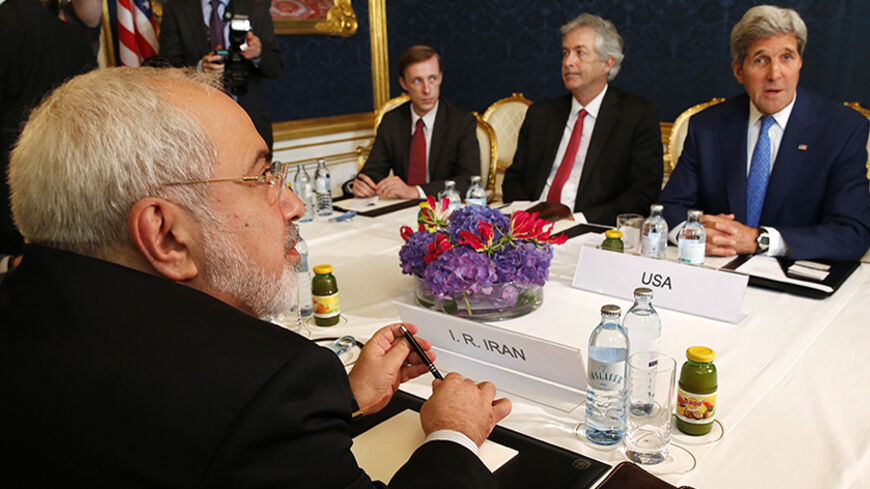 Vienna — US Secretary of State John Kerry held a second day of “lengthy and productive” meetings with Iran Foreign Minister Mohammad Javad Zarif here Monday (July 14), as negotiators from Iran and the six world powers (P5+1) seek an elusive breakthrough to help clinch a final Iran nuclear deal by a deadline next week.

Kerry and Zarif, joined in the evening by European Union foreign policy chief Catherine Ashton, “had a lengthy and productive meeting tonight,” a State Department official said July 14, adding that Kerry planned to stay on in Vienna a second night.

“The negotiating teams are working very hard to see if they can make progress here,” the State Department official said. “Tonight’s discussions were serious, but there is more work to do.”

Analysts said there was pressure to reach at least a political breakthrough on the key sticking point of Iranian enrichment capacity by the July 20 deadline when a six-month interim nuclear deal expires, after which other matters could more quickly fall into place.

“If there’s a deal to be done, it can/should/will be done by [July] 20,” Suzanne Maloney, a former State Department Iran expert at the Brookings Institution, told Al-Monitor July 14. “If Tehran can’t swallow the necessary compromises by then, well, what’s likely to change that equation with another six weeks or six months of talking?”

“A deal is probably not possible by July 20. What is possible is a breakthrough,” Ali Vaez, senior Iran analyst at the International Crisis Group, told Al-Monitor in Vienna July 14.

If a breakthrough on enrichment capacity could be reached, "everything else falls into place," Vaez said. The implementation details for the rest of the comprehensive deal could be worked out fairly quickly — over a matter of weeks, he said.

But a former member of the US-Iran nuclear negotiating team said an extension is almost certainly in the cards, and what negotiators should seek to do is make as much progress as possible to justify one, including to Congress.

“Between now and July 20, I think the US should have two objectives,” Robert Einhorn, former top Iran arms control adviser on the US negotiating team, told Al-Monitor July 13. “One is to make as much progress as possible on a comprehensive deal in order to be able to better justify an extension.”

“We know there is going to be congressional criticism of extending the time,” Einhorn, now with the Brookings Institution, said. “The administration knows that it can address that criticism better if it can show signs that progress is being made.”

“The second goal is to work out the terms of an extension that are as advantageous as possible,” Einhorn continued.

If a political breakthrough was reached on key matters, but negotiators needed more time to work out a complex technical implementation plan, “one thing they could [do] is issue a one- or two-page framework for a comprehensive agreement,” he suggested.

An Iranian analyst close to the Iranian negotiating team agreed the parties need to produce something by July 20 to justify the probable need for a brief extension.

“We need a mutual understanding by July 20, a basis for a brief extension, for a couple of weeks,” the Iranian analyst, speaking not for attribution, told Al-Monitor July 14.

The Iranian team “doesn’t want to produce fuel for all reactors” Iran will eventually need, he added.

From the first official meeting of Zarif and Kerry on the sidelines of a P5+1/Iran meeting in New York last September, the Iranian team “clarified … ‘we will not haggle,’” the Iranian analyst said. “’We will say our position. We want to end this thing.’”