US, Iran negotiators say it is unclear if the other is ready to make the tough choices needed to reach an acceptable final nuclear agreement. 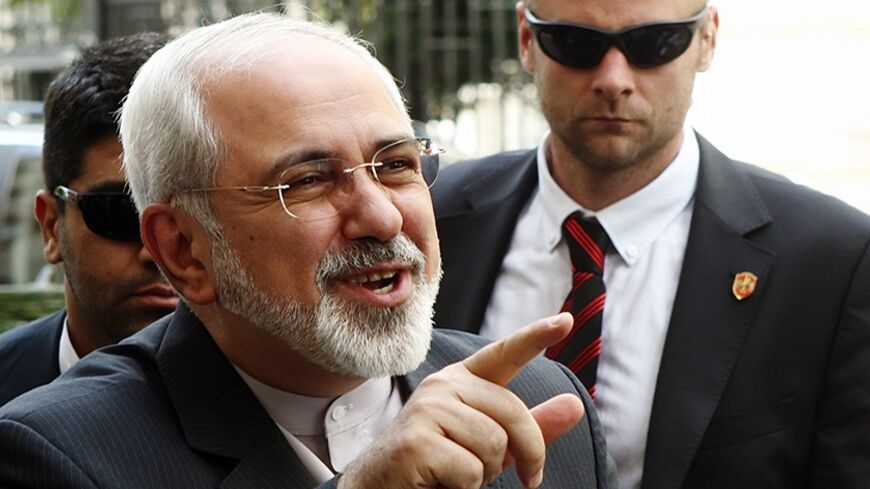 Iranian Foreign Minister Mohammad Javad Zarif talks to journalists as he arrives at the Iranian Embassy in Vienna, June 16, 2014. -

Vienna — As Iran final deal talks enter the one-month endgame, Iran and US negotiators staked out tough public positions and challenged the other side to make difficult decisions or risk seeing a historic opportunity elude them once again.

“We will not retreat from our [positions],” Iranian Foreign Minister Mohammad Javad Zarif said in a blustery press conference to Iranian journalists Friday (June 20), at the conclusion of five days of talks here. Negotiators from Iran and the six world powers (the five permanent members of the UN Security Council plus Germany, or P5+1) said they would return to Vienna for marathon nuclear talks beginning July 2 that are expected to last until the July 20 deadline when a six-month interim deal expires.

“It’s still unclear if Iran is ready to take all the steps necessary to ensure that Iran’s program is entirely peaceful,” the lead US negotiator, Undersecretary of State Wendy Sherman, told journalists here at the conclusion of the talks June 20. Iranian political leaders have repeatedly said “they don’t want or intend to develop a nuclear weapon. … It’s critical we give this process every chance to succeed.”

If a good nuclear agreement can be reached, "Iran would get comprehensive sanctions relief over time," for verifiable steps it takes to modify its nuclear program to reduce proliferation concerns, Sherman said. “We are committed to … a successful outcome.”

Zarif singled out the United States as responsible for the P5+1 putting forward what he called unreasonable demands on Iran’s nuclear program in the final deal talks, and for leading the imposition of “illegal,” harsh international economic sanctions on Iran for its nuclear program.

Echoing the argument Iran has put forward in the nuclear talks that it has a practical need to eventually spin tens of thousands of centrifuges to produce its own enriched fuel for nuclear power production, Zarif said various Iran nuclear facilities, including the Natanz enrichment site, “all are used for fuel production in Bushehr,” Zarif said. “The practical requirements are quite clearly shown."

The six world powers have, by contrast, proposed that Iran should cut back its enrichment capacity in the next few years from the 10,000 centrifuges currently operating, to increase the amount of time it would take Iran to produce weapons grade uranium to over a year.

Some analysts said there appeared to be scant signs that Iran and the P5+1 had actually begun to haggle over a possible compromise on this hardest issue of the talks, the enrichment capacity Iran would have in a final deal.

“But I do think it’s hard to see a big move in the remaining time before the [interim deal, the Joint Plan of Action] expires,” Maloney said. “Not impossible, just increasingly unlikely. Where [the Iranians] have given — Arak, sanctions — they have prepped the ground. On centrifuges, they have stayed pretty consistent to their going-in position.”

But for all the blusters and acknowledged wide gaps over key issues remaining only a month before the final deal deadline, negotiators did not look very discouraged as talks concluded here June 20, and even seemed a bit energized as they prepare to go into marathon talks over the next month.

“Thirty days out from the deadline, it is not surprising that both sides are making tough sounding statements about their negotiating position,” Daryl Kimball, head of the Arms Control Association, told Al-Monitor. “This is par for the course at this stage of a major international negotiation.”

“Each side understands at this point quite well where they can move, where can they adjust and where the other side can go,” Kimball said, likening the brinksmanship in the endgame talks as “nuclear chicken.”

Amid the tough posturing, and uncertainty if such wide gaps could be closed in the next month if at all, a senior US official said in her estimation it was probably the best chance the world has had to resolve this issue.

“We would like to get an agreement,” the senior US administration official, speaking not for attribution, said June 20. The US administration is “completely focused … on getting a good deal — not just any deal.”

“Perhaps the demands seem tough to Iran,” the US official said. “There are many things Iran needs to do to provide the assurances necessary” that its nuclear program is entirely peaceful and that it cannot make a rapid dash for a bomb.

“I would not characterize it as the first or last chance, I would characterize it as the best chance,” the US official said. “We have had in-depth, constructive talks. We understand each other quite well. … An enormous amount of work has gone into this by everyone. … We should maintain this level of robust diplomacy and give every single chance to succeed.”