As the Nov. 24 deadline approaches, Iranian and US nuclear negotiators are preparing for the final push. 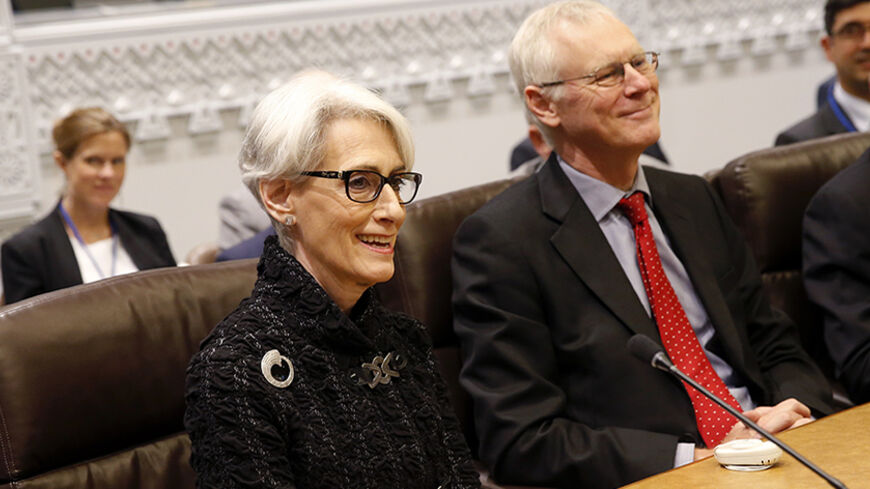 US Undersecretary of State Wendy Sherman sits with the British political director of the Foreign and Commonwealth Office, Simon Gass, at the outset of the political directors meeting of the EU/E3+3 to discuss the Iranian nuclear issue at United Nations headquarters in New York, Sept. 19, 2014. - REUTERS/Mike Segar

US and Iranian negotiators are preparing to enter the intense endgame in the Iran nuclear deal talks, amid mixed assessments of prospects for completing the deal by the self-imposed Nov. 24 deadline, just under a month away.

“This is the time to finish the job,” lead US negotiator Undersecretary of State Wendy Sherman told the Maxwell School of Public Affairs on Oct. 23 in rare public remarks about the sensitive Iran nuclear negotiations.

“If Iran truly wants to resolve its differences with the international community and facilitate the lifting of economic sanctions, it will have no better chance than between now and Nov. 24,” Sherman said. “Will that happen? I don’t know. I can tell you that all the components of a plan that should be acceptable to both sides are on the table.”

While the reported purpose of the visit was to “praise the achievements of the scientists and technicians working at the two facilities,” Zarif also stressed “the use of nuclear technology for civilian applications,” Iran’s semi-official nuclearenergy.ir website wrote. The visit’s significance was also symbolically notable. The issue of the size of Iran’s enrichment capacity in a final nuclear deal has been the key hold-up to finalizing agreement, negotiators have said. Iran has wanted to keep the number of centrifuges it is currently operating — about 9,400 centrifuges; while the P5+1 (the five UN Security Council permanent members plus Germany) initially proposed Iran reduce its enrichment capacity to 1,500 centrifuges in the near term.

Iranian media reported last week that the P5+1 has offered a modified proposal under which Iran could keep around 4,000 centrifuges if it takes other steps to increase its breakout time, including sending out more of its stockpile of low-enriched uranium and converting the stockpile it keeps into a form that would be difficult to higher enrich.

US officials, while not confirming the reports, have recently said there are multiple combinations of ways that Iran’s breakout time could be extended, and the focus should not only be on the centrifuge numbers in a deal. The goal, US officials said, should be a deal that closes off all possible pathways for Iran to make fissile material for a nuclear weapon, either through producing weapons-grade uranium, plutonium or through a covert facility.

“We’re trying to shut down the four pathways to get enough nuclear material for a nuclear weapon,” a US official told journalists in Vienna Oct. 15. “There are a lot of ways you can do that. There’s no one right answer.”

“It would be a mistake to focus inordinate attention on any one issue at the expense of all others,” Sherman said in her Oct. 23 remarks. “Every piece is critical whether it involves infrastructure, or stockpiles, or research, or types of equipment, or questions of timing or sequencing.”

But regarding the critical issue of the size of Iran’s enrichment capacity, Sherman insisted Iran would have to come down from the status quo — its current operating numbers — and the time to make the concession was now.

“Iran’s leaders would very much hope that the world would conclude that the status quo — at least on this pivotal subject — should be acceptable, but obviously, it is not,” Sherman said in her Oct. 24 remarks, referring to the issue of the size of Iran’s enrichment capacity.

“The world will decide to suspend and then lift nuclear-related sanctions only if and when Iran takes convincing and verifiable steps to show that its nuclear program is and will remain entirely peaceful,” Sherman said.

Iranian Deputy Foreign Minister Abbas Araghchi echoed that standard in remarks responding to Sherman’s speech, in which he criticized what he called efforts to negotiate through the media.

“We also believe that the existing opportunity is a great chance that may not be available for neither side again,” Araghchi said in an Oct. 25 statement reported by the Iranian media. “We are certain that if the other side adheres to its declared objective in the negotiations, making sure that Iran’s nuclear program is peaceful, realizing this goal is not that difficult.”

Arms control and Iran experts who regularly consult with the US administration offered conflicting assessments of prospects for completing the comprehensive nuclear accord by the Nov. 24 deadline, with some suggesting an extension would likely be needed, but others insisting the administration sees a narrow path to complete the deal by then.

“In terms of completing the comprehensive deal by Nov. 24, I would say the probability is very near zero,” Robert Einhorn, a nuclear expert who previously served on the US-Iran nuclear negotiating team, told an Arms Control Association conference on Oct. 20.

But Einhorn said he thought one option would be that there could be agreement reached on a “cluster” of key issues (such as enrichment capacity, modifications to the unfinished Arak research reactor, etc.) reached by the Nov. 24 deadline that would justify a few more months to finalize the remaining technical details.

If the parties “reached agreement on a cluster of these issues, they would have a strong case to justify taking several more months,” Einhorn said. “That may or may not be possible.”

Other experts said US officials had suggested that they believe they genuinely have a shot at getting the whole thing done by Nov. 24.

“They are definitely in a new phase,” one expert, speaking not for attribution, told Al-Monitor, referring to the US negotiating team. “The new phase is preparing the ground for the deal.”

“Can they get a comprehensive agreement with the technical appendices” by the deadline? the expert said. “Yes, they can.”