US Undersecretary of State Wendy Sherman urged diplomats to tell Iran to seize opportunity for a nuclear deal ahead of resumed negotiations in New York. 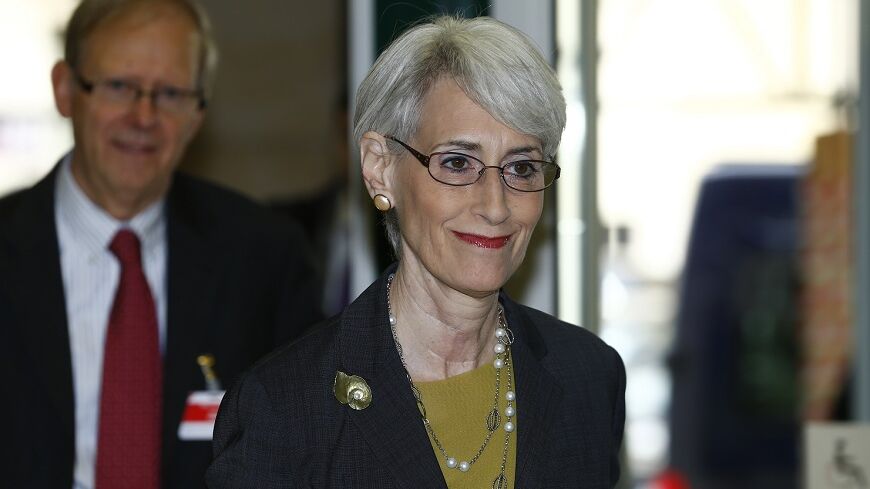 US Undersecretary of State for Political Affairs Wendy Sherman arrives before the start of nuclear talks with Iran at the United Nations offices in Geneva, Nov. 7, 2013. -

WASHINGTON — When Undersecretary of State Wendy Sherman addressed a roomful of 200 foreign ambassadors to the United States last week, she implored them to tell their capitals to pass two crucial messages to the Iranians: the importance of seizing what may be the last opportunity to reach a nuclear deal, and that no agreement will be possible without Iran reducing the scope of its nuclear enrichment program.

“Ambassador Sherman’s remarks on Iran were focused on the importance of seizing this opportunity to resolve international concerns about Iran's nuclear program, and the fact that no agreement — and no relief from sanctions — will be possible unless Iran agrees to reduce — significantly and verifiably — the size of its uranium enrichment activities,” a senior US administration official familiar with Sherman’s briefing told Al-Monitor.

Sherman’s message on Iran at the briefing to Washington’s diplomatic corps comes ahead of what is expected to be an intense and frenetic diplomatic drama as nuclear negotiations between Iran and six world powers (China, France, Russia, the United Kingdom and the United States plus Germany, or P5+1) resume in New York this week, alongside events marking the opening session of the UN General Assembly (UNGA).

Amid the UN-related hoopla and drama — will President Barack Obama and Iranian President Hassan Rouhani follow up their phone call last year with a meeting? a handshake? — the nuclear negotiations are picking up with renewed urgency after an August lull in which little progress was made in closing the major obstacles to a nuclear deal, diplomatic sources tell Al-Monitor.

“We are not optimistic because many differences remain,” an official from a member of the P5+1, speaking not for attribution, told Al-Monitor Sept. 12. “Basically it’s a question of numbers. The 3+3 [P5+1] thinks there should be a limited number of centrifuges, and the number the Iranians are talking about is much higher. It is difficult to reconcile.”

“When we pushed back the dates, we were hoping something would come up,” the official said, referring to the decision in July to extend the final nuclear deal talks until Nov. 24. “That Iran would take a step forward. Maybe they think the same from us.”

But “we are far apart,” the official said, adding there is still hope that some sort of breakthrough could be reached in New York that would give momentum to the negotiations, though no reason to expect that will occur. “We are hoping something happens there.”

“I think the fundamental impasse remains,” former US Iran nuclear negotiator Robert Einhorn told Al-Monitor Sept. 11. “I think they [the Iranians] genuinely want a deal. But I think they believe they can live without one. I think some in Iran may be underestimating the difficulties they face, economically, without an agreement.”

“So it is hard to tell whether Iran’s current tough position on enrichment capacity is a bargaining tactic or really their bottom line,” Einhorn said. “I suspect there is more give in their current position, but how much give, I just don’t know.”

“The vibe I am getting … is that there are probably going to be unbridgeable gaps,” George Perkovich, arms control expert at the Carnegie Endowment for International Peace, told Al-Monitor. “I don’t get that the leader [Iranian Supreme Leader Ayatollah Ali Khamenei] has decided or has indicated he will accept some of the things we have to have.”

An Israeli diplomat agreed that without a shift in Iran’s position on enrichment capacity, it was hard to see how a deal would materialize this fall.

“Ultimately, what the supreme leader said, is he wants to have the current working [enrichment] capacity, continuing his aim of industrial scale production,” the Israeli official, speaking not for attribution, told Al-Monitor Sept. 9. “I don’t think he has left that position.”

Sherman, speaking to the diplomatic corps last week, said some progress had been made in the talks to date, but acknowledged key differences remain.

“The talks have been serious and have identified potential answers to key questions, but we remain far apart on other core issues,” she said, according to the US official. “The status quo — or something very close to the status quo — is not acceptable.”

“Iran’s leaders have repeatedly disavowed any desire to build a nuclear weapon,” Sherman said. “This negotiation offers them a chance to match their words with verifiable actions.”

“The world will agree to suspend and then lift sanctions only if Iran is willing to take verifiable steps to demonstrate convincingly that its nuclear program is and will remain wholly peaceful,” Sherman said. “The ideas the P5+1 has presented to Iran uphold this standard, and are also fair, flexible, and understanding of Iran's scientific know-how and desire for a civilian nuclear program.”

Three days after Sherman conveyed the US message on Iran to the diplomats, she got a surprisingly direct acknowledgement from Iran’s 75-year-old Khamenei who he is well aware of her and her role in the bilateral negotiations he has authorized his Iran Foreign Ministry team to conduct with the United States on the nuclear issue.

In a television interview Sept. 15, Khamenei said he had amused himself during his hospital convalescence following prostate surgery last week watching US officials discuss their efforts to rally together a coalition to fight the so-called Islamic State (IS).

Apparently insulted by US Secretary of State John Kerry’s comments in recent days that Iran should not be part of the anti-IS coalition the United States was trying to assemble, Khamenei said in fact the United States had first asked Iran, through the two countries’ respective ambassadors in Baghdad, if it wanted to cooperate in the fight against IS.

While some of his advisers thought cooperating with the United States against IS was a good idea, Khamenei said he had personally vetoed the idea.

Kerry himself had raised the issue with Iran’s Foreign Minister Mohammad Javad Zarif, Khamenei said. Sherman had also raised it with her counterpart, Iranian Deputy Foreign Minister Abbas Araghchi, who told her the idea had been rejected, Khamenei recounted.

“[Kerry’s] deputy, who is a female, she asked Araghchi, during the negotiations, to work together,” Khamenei said. “They rejected it.”

“It is a great honor that the Americans are desperate from us to seek a collective action,” Khamenei said, according to a translation of the interview at Lenz Iran. “That is an honor for us, not a matter of regret.”