Diverse career path for US negotiator

“Love what you do,” Wendy Sherman, the United States' Iran negotiator, urged students at a ceremony to honor her diplomatic achievements. 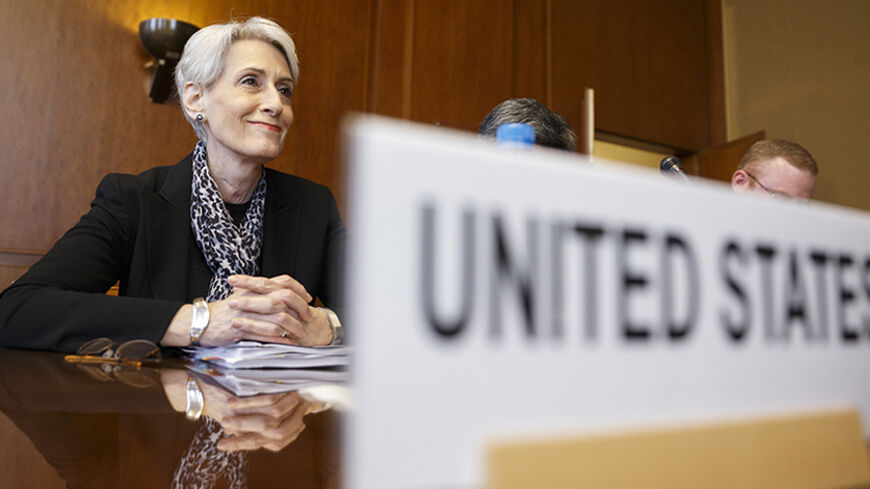 US Under Secretary of State Wendy Sherman sits at a trilateral meeting with the UN-Arab League envoy for Syria, Lakhdar Brahimi, and Russian Deputy Minister of Foreign Affairs Gennady Gatilov during the Geneva II talks at the European headquarters of the United Nations, Feb. 13, 2014. - REUTERS/KEYSTONE/Valentin Flauraud

NEW YORK — Wendy Sherman’s early career as a social worker and community organizer was excellent, if perhaps unlikely preparation for her current role as lead US Iran negotiator, said the veteran diplomat Thomas Pickering. “In every sense of the word, she has moved from dealing with those problems that individuals have in our society to the greatest challenges facing us on earth today,” Pickering observed, speaking Sept. 16 at an awards ceremony honoring Sherman as a recipient of the Jit Trainor Award for distinction in diplomacy at the Georgetown School of Foreign Service. “She found the ability to move from one to the other.”

Sherman’s diverse career path — from community organizing in her native Baltimore to serving as chief of staff to then-Rep. Barbara Mikulski of Maryland and then as Mikulski's campaign manager in her successful run for the US Senate — proved to be “strong preparation for successful diplomacy,” Pickering said, leading ultimately to Sherman’s stints as President Bill Clinton’s North Korea negotiator and now President Barack Obama’s Iran nuclear negotiator.

“I am not someone who ever had a five-year plan,” Sherman said at Georgetown, revealing that she had “seized opportunities” along the way as they presented themselves. She did not allow herself to worry about whether she knew enough to take on the challenge at hand. “Skills are transferrable from one discipline to another.”

For Sherman, who for the past three years has served as under secretary of state for political affairs — the number four position at the State Department — public recognition of her diplomatic achievements does not come with much spare time for reflection. The nuclear negotiations with Iran that she leads on the US side resumed Sept. 17 in New York and are at a critical moment. Iran and six world powers are meeting to see if they can reach a final accord on Iran’s nuclear program by Nov. 24, despite key differences in the two sides’ terms for a deal.

Born in Baltimore to parents who worked in real estate to promote civil rights and racial integration in Maryland, Sherman has also been active in women’s empowerment and social justice issues. She headed EMILY’s List, a group that works to help get female Democratic candidates elected, did a stint at Fannie Mae and chaired the board of the humanitarian group Oxfam America. After serving as chief of staff and campaign manager to Mikulski, who became the first Democratic women elected to serve in the Senate in her own right, Sherman took a job heading the State Department’s legislative affairs shop during the Clinton administration.

Sherman went on to serve as counselor to Secretary of State Madeleine Albright, becoming an important adviser on North Korea to the Clinton administration. She later became vice chair of the Albright Stonebridge Group and then co-chaired the Obama-Biden State Department transition team, along with Tom Donilon, who later became national security adviser. Sherman sat out most of the first term of Obama’s administration, joining it in September 2011 as under secretary of state for political affairs.

Perhaps no experience in Sherman’s background is more relevant to her current role negotiating with the Iranians — and defending the sensitive talks and interim nuclear deal to a skeptical Congress — than her past jobs on Capitol Hill, including as Mikulski’s chief of staff.

Mikulski and Sherman are fellow alums of the University of Maryland School of Social Work. Mikulski said she met Sherman, then a social worker specializing in community organizing, through mutual friends. “I was so impressed by, number one, her values, her commitment to social justice, her commitment to security, whether in the home, in the community and neighborhood, and now in the world,” Mikulski told Al-Monitor. “I was so impressed by her I offered her the job to be my chief of staff.”

Mikulski also recalled that Sherman had “great parents” who “were very active in the civil rights movement in Baltimore, Maryland,” where her father “was legendary” in real estate, as a champion of fair housing. Sherman’s father, Malcolm Sherman, reportedly gave a news conference in 1960 in which he said he would sell real estate to anyone “regardless of race, creed or color,” according to his 2009 obituary in the Howard County Times. He also served as a marine in World War II. Mikulski said of Sherman’s parents, they were “so committed to peace, her mother [Miriam] and father, on their own dime, went to the opening session in San Francisco of the United Nations,” in 1945. “Wendy comes from that kind of background.”

In contrast to Sherman’s professional and family background in community organizing and civil rights endearing her to Mikulski and the Democratic Party, her lack of a traditional background in diplomacy was perhaps viewed with initial skepticism by some in Foggy Bottom. Sherman’s role advising the Clinton administration on North Korea also came with baggage. Republican critics have frequently charged that diplomacy with North Korea may have achieved a nuclear deal, but it did not prevent Pyongyang from later producing nuclear weapons. Some have predicted that anything the Obama administration might achieve with Iran might prove to be just as ephemeral.

“My view of Wendy is, when she came into the [Obama] administration in the fall of 2011, I think there were a number of people at the White House who were skeptical of her,” seeing her perhaps as an acolyte of Hillary Rodham Clinton and questioning how effective she could be, a former Obama administration official told Al-Monitor. “I think she slowly but steadily won support in all the quarters of the US government,” the former official said. “She is a very effective negotiator. She knows the substance inside and out. She is not a nuclear expert, but she has really come to master her brief — the technical details of the Iran nuclear program and multiple sanctions issues.” Concluded the former official, “I think she really earned the trust and confidence, especially of the White House.”

If defending the Iran nuclear negotiations to Congress takes almost as much of Sherman’s time as actually negotiating with Iran on the number of centrifuges in a final deal, that ability is a key political strength she brings to the US administration, said Robert Einhorn, her former colleague on the nuclear negotiating team, in an interview with Al-Monitor.

“I think one of her very strong points is the ability to bring together the key strands of her job, which is dealing with the domestic political situation,” said Einhorn, the former top Iran arms control expert on Sherman’s negotiating team. Sherman is “active with the Hill; she understands the president’s political needs.” Also, according to Einhorn, "She understands the needs of our foreign partners, the Gulf Arabs and Israelis. And she is the point person in managing those relationships very skillfully.” Sherman also deals with the press, usually briefing the media once or twice during each major round of negotiations. That’s on top of actually negotiating with the Iranians, Einhorn noted. “It’s very hard. It takes a lot of time … I think Wendy brings all of the strands together.”

Sherman’s former colleague described her as “a very quick study.” Einhorn recalled, “She got up to speed very quickly and mastered a lot of the arcane details of dealing with nuclear and technology issues.” Einhorn, now at the Brookings Institution, said, “I have always been impressed with her ability to get right on top of the issue and master it and really take charge.” As to how the Iran nuclear negotiating team sees her, Einhorn said he did not know for certain, but noted, “I am sure they perceive her, as all of us, as a highly capable professional who is going to represent the US very well.”

Iran’s supreme leader, Ayatollah Ali Khamenei, recently uncharacteristically referred to Sherman directly, if not by name, saying in an interview that Secretary of State John Kerry’s “deputy, a female” had asked her counterpart, Deputy Foreign Minister Abbas Araghchi, if Iran wanted to cooperate with the United States in the fight against the Islamic State. Araghchi rejected the offer, Khamenei said.

As to what comes next for Sherman, she has widely been rumored to be (along with Tony Blinken, the deputy national security adviser) under consideration to succeed William Burns as deputy secretary of state after he retires in October. A US official, speaking not for attribution, said no decision has yet been made.

A graduate student at the Georgetown ceremony asked Sherman her advice for young women pursuing careers. Sherman said her advice to women and men is largely the same. “Love what you do,” she responded. “Work with colleagues you enjoy being with … After the honors, there is the work. Make sure you are impassioned about what you do.”