Burns retires, but will consult on Iran negotiations

If a long-term nuclear deal with Iran is achieved, it will be in no small measure due to the efforts of Deputy Secretary of State William J. Burns. 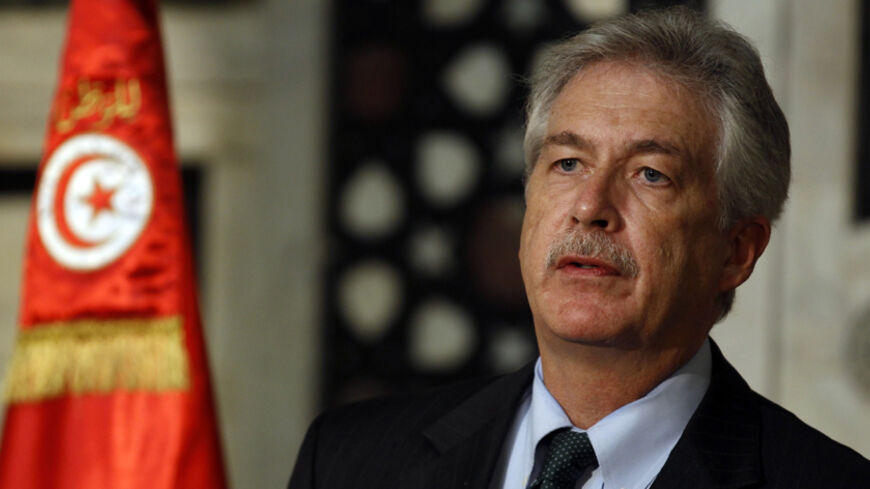 When Deputy Secretary of State William J. Burns accepted the Eurasia Foundation’s Sarah Carey award Oct. 21, he gave a classic, understated performance. Burns, who officially retires Oct. 24 after nearly 33 years in the Foreign Service, devoted most of his brief remarks to praising Carey, an early and avid proponent of US engagement with the Soviet Union, and spent almost no time dwelling on his own remarkable career.

One of only two career Foreign Service officers elevated to the State Department’s number-two position, which is usually reserved for political appointees, Burns is “unique,” in the words of former Undersecretary of State Thomas R. Pickering, for having served in high posts in both Democratic and Republican administrations. He is also unusual in Washington for his modest ego and ability to conduct sensitive negotiations in secret, as he has done most recently with Iran in the effort to achieve a breakthrough on its nuclear program.

“Usually, the deputy secretary gets big headlines when he goes anywhere,” said Brent Scowcroft, a former national security adviser. He told Al-Monitor. “Not Bill. He just does the job.”

“I think he is just the most talented diplomat of his generation,” Suzanne Maloney, a former State Department policy planning adviser, told Al-Monitor. “I have never met anyone who doesn’t hold Burns in the highest respect. … He is an incredibly thoughtful and judicious policymaker — which makes him rare.”

Burns has agreed to keep working the Iran file as a government adviser, essentially a paid consultant, in the hope of securing a long-term nuclear agreement by the current Nov. 24 deadline or possibly beyond, if another extension to reach a comprehensive accord is required, as is increasingly anticipated. If the talks succeed between Iran and the five permanent members of the UN Security Council plus Germany, it will be in no small measure because of Burns’ work.

Many American Iran analysts say Burns’ role cannot be underestimated in leading US efforts to forge a diplomatic channel with Iran. “The Iranians feel comfortable working with Bill, even though they know he is a tough negotiator, always looking for ways to maximize US interests,” Suzanne DiMaggio, head of the New America Foundation’s Iran and Asia programs, told Al-Monitor. “They respect him because of his deep knowledge about Iran and his self-effacing manner, both of which are limited commodities in Washington. And, for Iranians, the quality of the relationship means everything.”

Because of Burns, said DiMaggio, “The US-Iran engagement ‘taboo’ has been obliterated, and it’s largely due to Bill’s stellar diplomatic skills and his ability to see the bigger strategic picture when it comes to Iran.” She went on, “If a nuclear deal is reached, let’s hope that he continues to play a role in seeing where a warming in relations with Tehran could go. And should the talks collapse, who else but Bill Burns could get things back on track?”

“I think diplomacy, at the end of the day, is not just about issues or difficulties, it’s about people,” Burns told Al-Monitor in a January 2014 interview. “And it’s about trying to work with people to see if you can find common ground, to recognize those areas of difference that you can bridge. And so for any effective diplomat, it’s really important to build up that set of relationships over the course of a career.”

Burns has the longest record of dealing with Iran of anyone currently serving in the US government. He began at an inauspicious time, in 1986, as a junior officer on the White House National Security Council (NSC). The Iran-Contra scandal would blow up a few months later, and Burns would be one of the few NSC staffers to emerge unscathed. Earlier this year, he told Nicholas Kralev, author of a book on American diplomacy, “I was so junior, I don't think anybody took any notice.” Colin Powell, who became national security adviser in 1987 in Iran-Contra's aftermath, promoted Burns to chief of the NSC's Middle East office, a decision Burns characteristically put down to “dumb luck.”

Under the George H. W. Bush administration, Burns was among a number of young so-called "food processors," who built an Arab-Israeli peace process in the aftermath of the 1991 Gulf War. He served as deputy head of the State Department’s policy planning office, and after the transition to the Bill Clinton administration, became executive secretary to Secretary of State Madeleine Albright and then ambassador to Jordan, where, according to Pickering, he became an “important adviser and confidant” to the then-young king, Abdullah II.

Perhaps the most frustrating period of Burns’ career came after the election of George W. Bush. When Powell, then secretary of state, chose Burns to be assistant secretary of state for Near Eastern Affairs in 2001, Burns spoke of advancing Arab-Israeli peace with a Washingtonian closely involved in Middle East affairs. Burns said, “This is the best team we have, and the best time we have.” That same Washingtonian, who spoke to Al-Monitor on condition of anonymity, said Burns conceded three years later that “It was the best team, but it was the worst time” to push a peace agenda, in part because of the dominance of counterterrorism in the aftermath of the Sept. 11, 2001, attacks by al-Qaeda.

Burns avoided becoming a casualty in the bitter infighting between the Powell State Department and Donald Rumsfeld’s Defense Department and the staff of Vice President Dick Cheney. Burns was rewarded by being appointed ambassador to Moscow and then undersecretary of state under Powell’s successor, Condoleezza Rice.

The Bush administration had frustrated the hopes of those seeking to engage Iran after 9/11 by including Iran in the “axis of evil,” along with North Korea and Iraq, and refusing to reply to a 2003 trial balloon offering comprehensive negotiations. In a 2006 interview, Burns — then speaking on background — described the proposal as “a very intriguing set of possibilities which some people have termed ‘a grand bargain.’” Burns added, “It was worth taking it another step and testing the proposition, but I don’t think anyone could have had their hopes up.”

As the United States became bogged down in Iraq, and Iran escalated its nuclear advances, US policy toward Iran began to shift. In summer 2008, toward the end of the Bush administration, Burns was allowed to join the multilateral talks with Iran in Geneva. Pickering, at the Oct. 21 awards ceremony, recalled that Iranians had contacted him before Burns joined the talks to find out what he was like.

“I said to them that you [Burns] are the best of the American diplomats and that Iran was lucky to have you come to the meetings,” Pickering said. Afterward, the Iranians told Pickering, by then long retired from the State Department and taking part in so-called Track II meetings with Iran, that he had been right about Burns and spoke of “what a sensational job you had done.”

Burns did not get to meet one-on-one with Iran's chief negotiator, Saeed Jalili, until Barack Obama became president. The two negotiators agreed in October 2009 that Iran would send its stockpile of low-enriched uranium abroad in return for fuel for an old, US-supplied reactor that makes medical isotopes, but the agreement fell apart in Tehran as opponents of President Mahmoud Ahmadinejad sought to deny him a landmark foreign policy achievement in the aftermath of the disputed 2009 elections.

With Ahmadinejad’s replacement by the more competent Hassan Rouhani in 2013, the prospects for success dramatically improved, as evidenced by the interim nuclear deal reached last November. Burns has been characteristically tight-lipped about whether he thinks a long-term agreement can be reached while doggedly embracing the effort to achieve one.

“The president has put the odds [of reaching a final deal] at 50-50,” Burns told Al-Monitor in the January interview. “And the truth is, against the backdrop of the tortuous history of [the] relationship between the United States and Iran, that’s actually not a bad opportunity to be tested. And I think it’s very important for us to test it.

“What the long-term possibilities are between the United States and Iran is very difficult to predict right now, given the range of differences between us,” Burns added. “But I do think it’s possible to make further progress on the nuclear issue, and I think that’s extremely important.”

“Engagement,” he told the Washington audience Oct. 21, “is not a reward for acquiescence, but the very best source of American leverage.” As for his own contribution to diplomacy, he said, “I didn’t get everything right, and I made my share of mistakes, but if, as Teddy Roosevelt once said, life’s greatest good fortune is to work hard at work worth doing, I’ve also been extraordinarily fortunate.”

Outgoing Deputy Secretary of State Bill Burns is expected to become the next president of the Carnegie Endowment for International Peace, Al-Monitor has confirmed.

The Carnegie board is expected to vote on Tuesday October 28 on the appointment and to announce Burns as its next president on Wednesday October 29, sources told Al-Monitor.

Burns, who formally served his last day at State October 24, will also serve as a special US government employee to work on the Iran nuclear deal talks as negotiators seek to try to close the final deal by November 24.