Exclusive: Burns led secret US back channel to Iran

US officials have confirmed that US Deputy Secretary of State William Burns led an intensive back channel effort to Iran beginning before the election of President Hassan Rouhani. 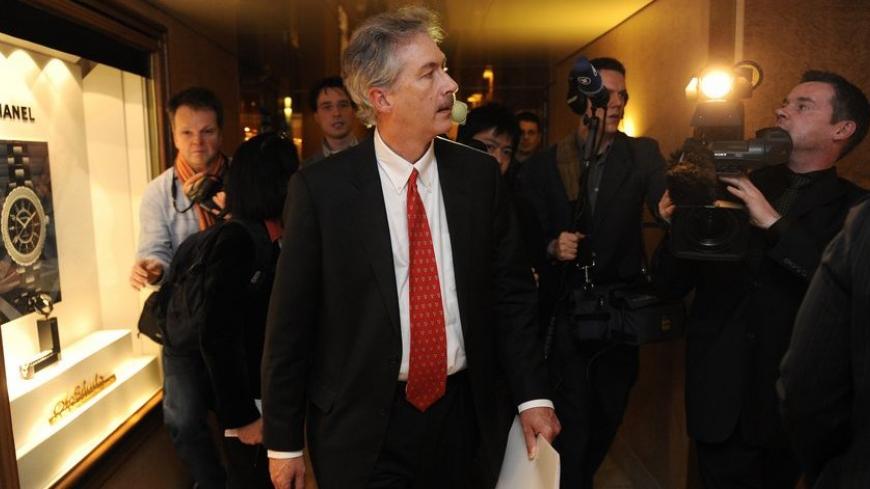 US State Department's point man on Iran, Bill Burns, leaves a meeting of international senior officials on Iran in a hotel in Wiesbaden, Feb. 4, 2009. - REUTERS/Kai Pfaffenbach

Geneva, Switzerland __ Deputy Secretary of State William Burns has led a secret US back channel to Iran going back to before the June election of Iranian President Hassan Rouhani, US officials told Al-Monitor.

Burns was tapped to lead the US diplomatic effort to establish a bilateral channel with Iran, which gained momentum after the exchange of letters between US President Barack Obama and Iranian President Rouhani in early August, US officials said. Led by Burns, the US's second highest ranking diplomat and a former lead US Iran nuclear negotiator, the US effort to form direct contacts with Iran also includes two officials from the Obama White House: Jake Sullivan, the national security advisor to Vice President Joe Biden, and Puneet Talwar, the National Security Staff senior director for Iran, Iraq, and Persian Gulf affairs, US officials confirmed. Talwar’s role in back channel discussions with Iran was previously reported by the Wall Street Journal.

Following the exchange of letters between Obama and Rouhani in August, “Deputy Secretary of State Bill Burns met bilaterally with Iranian counterparts,” several times over the past few months, starting before the UN General Assembly opening session in September and in Geneva this month, a senior US Administration official told Al-Monitor in an interview late Friday.

President Obama referred obliquely to the establishment of a direct US-Iranian channel in a statement from the White House after negotiators for six world powers and Iran reached a nuclear deal here in Geneva tonight.

"We have pursued intensive diplomacy – bilaterally with the Iranians, and together with our P5+1 partners: the United Kingdom, France, Germany, Russia, and China, as well as the European Union," Obama said from the White House Saturday. "Today, that diplomacy opened up a new path toward a world that is more secure – a future in which we can verify that Iran’s nuclear program is peaceful, and that it cannot build a nuclear weapon."

Al-Monitor learned that Burns was in Geneva during the second round of nuclear talks between the five permanent members of the UN Security Council (the US, UK, France, Russia, China) plus Germany (P5+1) and Iran held here November 7-9, and subsequently learned additional details about the bilateral channel, but agreed to hold the story at the administration’s request until the conclusion of the third round of nuclear talks that ended here in a breakthrough tonight.

Al-Monitor also learned that Burns is currently in Geneva during this round of Iran nuclear negotiations. Both times, he did not stay at the main diplomatic hotel, the Intercontinental, where many of the negotiations have taken place, but at another site, the US official said. Talwar has been seen by journalists at bus stops in the city and running towards the hotel at various times during the last three rounds of talks here; it could not be confirmed if he was relaying messages between the discussions taking place on site at the hotel, where the US, European and Iranian delegations stay, to Burns at another site.

“You know we have always said that we are open to bilateral discussions with Iran, in addition to the P5+1,” the senior US administration official told al-Monitor in an interview. “But this was always with the understanding that the nuclear negotiations were going to be resolved through the P5+1 even if other bilateral channels were going on.”

Burns’ first sit-down with the Iranians occurred before the opening session of the United Nations General Assembly in New York in September, the US official said, and helped bring about the 30-minute meeting between Zarif and US Secretary of State John Kerry on the sidelines of the UN September 26, 2013, as well as the historic Obama-Rouhani phone call on September 27, the first conversation between the presidents of the two countries in over thirty years. The US official declined to say where the two Burns-led meetings with the Iranians occurred before UNGA; there have, in all, been “several,” the US official said.

"Bill [Burns] knows the Iranians, and he knows the issue really well,” the senior US administration official told Al-Monitor to explain why he was tapped for the sensitive mission.

Burns, only the second career US foreign service officer to be confirmed as deputy secretary of state, previously served as the lead US negotiator at P5+1 talks with Iran from 2008-2011, including at October 2009 talks in Geneva at which then Iranian nuclear negotiator Saeed Jalili agreed to a nuclear fuel swap deal that Iran later backed away from amid domestic political criticism. In July 2011, when Burns was confirmed as Deputy Secretary of State, he turned over the Iran/P5+1 nuclear negotiating file to his successor, Under Secretary of State Wendy Sherman, who has led the US negotiating team to the last eight rounds of P5+1 talks with Iran that culminated in an agreememt here.

Burns also previously served as US Ambassador to Russia from 2005 until 2008, and as Assistant Secretary of State for Near Eastern Affairs from 2001 until 2005. Zarif, tapped by Rouhani as foreign minister and top nuclear negotiator in August, previously served as the Iranian ambassador to the UN in New York in the early 2000s, during a brief period of testing for more constructive US-Iranian relations, including on Afghanistan in 2001.

“Running up to the [June] 2013 Iranian election, there was a sense that we had to wait and see if the Iranians under the new administration were serious about negotiations,” the US official said. “And it became clear after the Rouhani election, that they seem serious.”

“Following the election, as has been reported, Obama sent Rouhani a letter that was delivered in early August,” the official said. “Following the exchange of letters between the two presidents, Deputy Secretary of State Bill Burns met bilaterally with Iranian counterparts before UNGA.”

“In those conversations, Burns and his team began to develop ideas that could be fed into the P5+1 process,” the US official said. “All of our bilateral discussions are designed to support and advance the P5+1 process; they have never been designed as a substitute. “

“As the P5+1 negotiations started picking up, Burns was joined as needed by [Under Secretary of State] Wendy Sherman,” the US official said. “They worked together to develop ideas that could be further negotiated with the P5+1. The goal, everything in the bilateral channel, was to be fed into the P5+1 channel,” the official stressed.

The US has notified P5+1 partners about the bilateral channel, the US official said, but would not disclose when. “We briefed them on the bilateral channel at the appropriate time,” the US official said. There are signs that at least some P5+1 partners were not aware of it at the second round of nuclear talks in Geneva Nov 7-9, during which the six world powers spent much of the meeting agreeing on their own text which they finally presented to Zarif late November 9.

“At the second and third rounds [of P5+1 talks with Iran in Geneva], Burns was present on the margins, to be available to the P5+1 and the Iranians, and to make sure the ideas discussed were integrated back into the P5+1,” the US official said.

“Given that so much of the economic pressure on Iran comes from the United States among other reasons, that is one reason it was important to establish this direct channel,” the official said. “Our P5+1 partners all encouraged us to have a bilateral channel, and they all have their own. And they told us, eventually to get an agreement…these discussions would be necessary.”

“None of the substance in the bilateral channel differed from the P5+1,” the US official stressed. “New issues weren’t raised. It enabled more detailed discussions [to occur] in the P5+1. It's not like any of the issues are a secret.”

Talwar has served as the top Iran advisor to the Obama White House since 2009, and previously served as a professional staff member on the Senate Foreign Relations Committee when it was chaired by then Senator, now Vice President Biden.

White House press officials have previously deflected queries from Al-Monitor about possible, rumored meetings involving US and Iranian officials. An NSC official suggested to Al-Monitor last week, for instance, in response to a query, that Sullivan could not be part of a meeting with Iranians because he was last week traveling with Biden in Texas and Panama. Sullivan did not respond to a query from Al-Monitor Saturday.

Similarly, the State Department’s official public schedules have regularly dissembled about Burns’ whereabouts. During both the second and current round of P5+1 Iran nuclear talks in Geneva this month, the State Department schedule said Burns was attending meetings at the White House and State Department, when Al-Monitor has confirmed that he was in fact in Geneva, even in advance of the rest of the US negotiating team. That was apparently at the direction of Burns' office to the State Department press officer who puts together the schedules, the official said.

“We thought it important to have these discussions [with the Iranians] discreetly, given the amount of ground we had to cover, lots of it very complicated,” the US official said Friday. However, the official added, “while in some respects” the US-Iran channel “had to be secretive, it is not a surprise.”