'Progress made' but deadline extended in Iran nuclear talks

With the self-imposed Nov. 24 deadline for a comprehensive Iran nuclear accord pushed seven months, analysts recognize important progress made in talks but worry that further delay could increase risk in relations between Iran and the West. 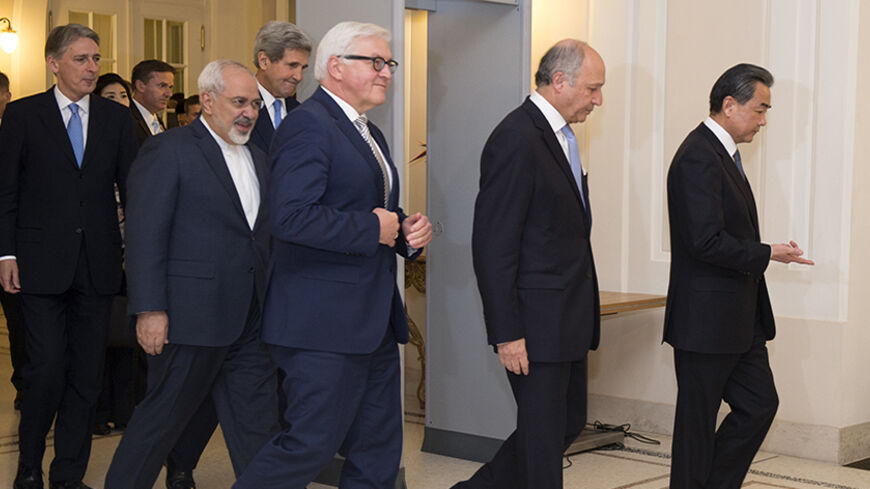 VIENNA — Progress has been made in resolving some of the toughest issues in the Iran nuclear talks in recent days, but the parties need more time to finalize a durable agreement, US Secretary of State John Kerry said here Nov. 24, as Iran and the six world powers announced they would extend an interim nuclear deal seven more months, and give themselves four more months to reach a political agreement for a comprehensive nuclear accord.

“Progress was indeed made on some of the most vexing challenges that we face, and we now see the path toward potentially resolving some issues that have been intractable,” Kerry told journalists at a press conference here after four days of intense, hands-on negotiations to try to finalize an Iran nuclear accord by a self-imposed Nov. 24 deadline.

"We really want this to work — but not at the cost of just anything,” Kerry said. “We want to reach a comprehensive deal and we want it to work for everybody. And we want the people of Iran to get the economic relief that they seek and to be able to rejoin the international community."

Iran’s Foreign Minister Mohammad Javad Zarif said he hoped to get the agreement done more quickly. "It is possible to reach a political framework even in weeks," Zarif told journalists in a press conference Nov. 24.

While Iran’s President Hassan Rouhani declared in a televised address to the nation Nov. 24 that he was confident the extended talks would reach a final nuclear agreement, Iranian officials privately expressed some disappointment at the decision to extend the talks.

"We have not yet reached a final agreement, but these are steps forward,” Rouhani said. "I have no doubts in the success of this path [of the negotiations], it will lead to a final deal.”

"We have chosen the road of interaction with the world and this has been the right path," Rouhani said.

Kerry praised Zarif, with whom he met several times in recent days, sometimes one-on-one, in what has become an increasingly common sight over the past 14 months of direct US-Iran diplomacy to try to resolve the 12-year dispute over Iran’s nuclear program.

"The Iranian foreign minister has worked hard and he has worked diligently,” Kerry said. "He has approached these negotiations in good faith and with seriousness of purpose, and that’s what it takes to try to resolve the kind of difficult issues here."

Analysts at the talks said Kerry’s comments about progress toward resolving some of the most "vexing" issues in the Iran nuclear negotiations suggested real progress had been made behind the scenes on the issues of enrichment capacity and sanctions relief, if not enough to try to race to an agreement here this week.

"The two outstanding issues that have been the most difficult to reconcile [in the negotiations] are uranium enrichment and sanctions relief," Kelsey Davenport, a nuclear expert with the Arms Control Association, told Al-Monitor Nov. 24.“So it is encouraging to hear Secretary Kerry say progress had been made on intractable issues, and that they see a path forward."

But Davenport said she thought there would have been merit in trying to finish the job here and now, rather than after the Republicans take over both houses of Congress next year.

"However, it is disappointing that the two sides missed this opportunity, and the extension opens up space for critics of an agreement to try and derail the negotiations," she said. "A good agreement is the only way to assure the international community that Iran’s program is limited and peaceful and give Iran the sanctions relief that it wants."

Ali Vaez, senior Iran analyst at the International Crisis Group, said he saw hope for rapid progress toward a deal in the coming months, comparing this week’s Iran nuclear talks in Vienna with the 1986 Reykjavik summit between Ronald Reagan and Mikhail Gorbachev that led to the first US Soviet arms control treaty a year later.

"This could be Iran’s 'Reykjavik moment,'" Vaez said.

"In 1986, Gorbachev and Reagan had an arms control negotiation in Iceland which had the exact same parameters," as the Iran talks in Vienna this week, Vaez said. "They were very close, they could see the light at the end of the tunnel, but the talks failed. However, because at that point [the two sides’] positions became 100% clear and they knew the advantages and disadvantages of not reaching an agreement, they went back a year later, and got the first arms control between the United States and the Soviet Union."

Similarly, the United States and Iran, in these negotiations in Vienna, over the past year have persistently seen an agreement as in their respective countries' national interests, despite the enormous difficulties and complexities of the negotiations as well as the fact that the two countries have not had formal diplomatic relations for 35 years.

"For the first time, [each side’s] real positions are 100% clear to the other side," Vaez said. "There is a limited window of time … If they want to make progress, the chance is the best it has ever been."

"I see no other way than looking at this as the glass half full," he added.