There had been indications of new progress behind the scenes in the Iran talks' final days. 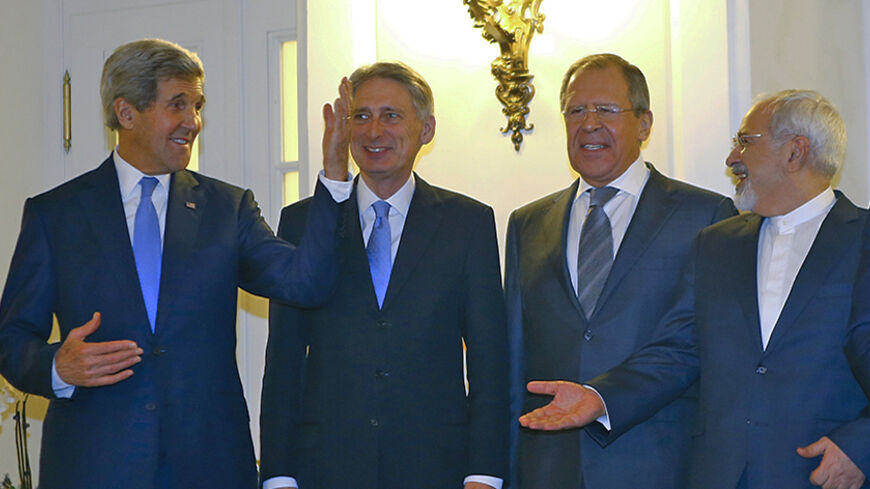 VIENNA — Two narratives have emerged from the Iran final deal nuclear talks held in Vienna this week that resulted in the decision to extend the talks another seven months, with four months to try to reach a political accord.

One narrative, suggested by US and other Western officials, is that though some progress was made, it came late, and amid continued significant gaps on core issues that necessitated extending the negotiations into next year.

The second narrative, held by some Iranian officials, is that there was substantial progress, even in the final days, that some thought they could rapidly build upon to finalize the political agreement in a matter of days or weeks. "We were there," a senior Iranian official told some interlocutors, suggesting he was disappointed Western counterparts did not decide to stay in Vienna over the next week to try to advance the deal.

"After our American friends enjoy [the] Thanksgiving holiday, we will be working hard," Iran’s Foreign Minister Mohammad Javad Zarif told journalists at a press conference in Vienna Nov. 24, perhaps hinting at disappointment that talks did not continue here this week.

Current and former US officials, while citing progress in the talks, say the view that an acceptable deal was within reach is unrealistic. "Secretary [of State John] Kerry … indicated there had been significant progress in the last few days, and some new ideas had come forward," former US Iran nuclear negotiator Robert Einhorn told Al-Monitor Nov. 24. "But at the same time, none of the major issues had been resolved. I think what that indicates is that all the parties were trying out ideas but it just wasn’t enough to close the gaps. But all the parties feel there was enough serious effort and forward momentum to warrant continuation of the talks."

Despite uncertainty whether the parties will ultimately be able to reach a political accord by the new March deadline, if at all, some officials and analysts briefed by negotiators suggested that there was some notable, positive shift, even in the last day of the talks, that has generated new, albeit cautious optimism that more rapid progress might now be made toward a final accord.

"In these last days in Vienna, we have made real and substantial progress, and we have seen new ideas surface," Kerry told journalists in Vienna Nov. 24.

"Now we believe a comprehensive deal that addresses the world’s concerns is possible,” Kerry added. “At this point, we have developed a clearer understanding of what that kind of deal could look like, but there are still some significant points of disagreement, and they have to be worked through."

Notably, France’s Foreign Minister Laurent Fabius — long viewed as skeptical of whether an acceptable Iran nuclear deal could be reached — on Nov. 25 said he found the latest round of talks "pretty positive," and said there had been progress in one of the most vexing issues of the negotiations, on the subject of enrichment capacity.

"On limiting Iran's capacity to enrich, I found that there had been a certain movement," Fabius told France's Inter radio Nov. 25, Reuters reported.

"The devil is in the detail, but there is a will to find an agreement that I hadn't felt in previous talks," Fabius said.

"Positions are much more realistic than in the past," Ali Vaez, senior Iran analyst at the International Crisis Group, said Nov. 25. "Now I think both sides can see the light at the end of the tunnel."

That "is great progress," Vaez said. "This is why despite the fact [that there is] no deal yet, I am more hopeful."

More rapid progress has happened in recent direct, one-on-one meetings between Kerry and Zarif, that have only resumed in the past days in Vienna. US and Iran diplomats have held a series of trilateral meetings in the presence of European Union counterparts this past fall, to try to keep coordination among the six world powers.

But that "resulted in an enormous amount of wasted time going in circles," as a result of procedural issues, one source, speaking not for attribution, said. But the direct US-Iran talks in recent days have helped make clearer "what are the realistic trade-offs" that could help advance a deal, the source said. "Now the contours of that are clear."