Khamenei supports nuclear deal but warns of 'the enemy'

Ayatollah Ali Khamenei, Iran's supreme leader, praises the conclusion of the nuclear deal and said if issues remain, he hopes they will be resolved. 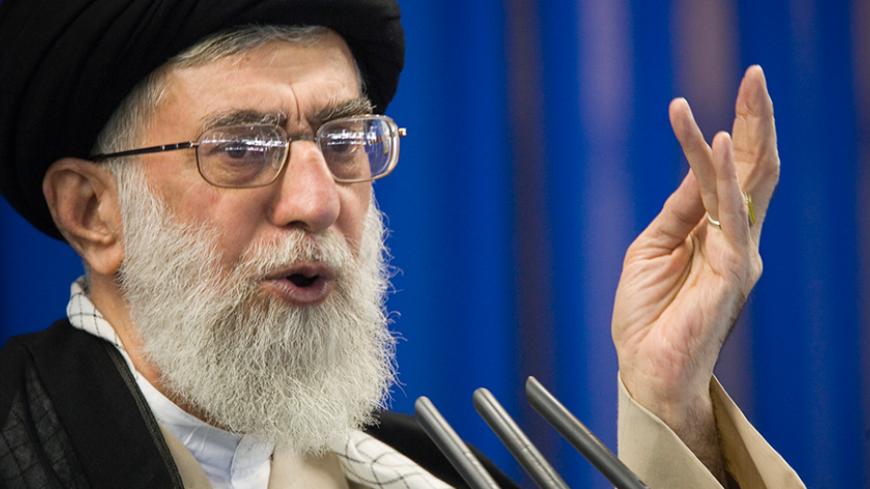 Iranian Supreme Leader Ayatollah Ali Khamenei met with President Hassan Rouhani’s Cabinet on Aug. 26, expressing support for the recent nuclear agreement but warning against the influence of "the enemy" in foreign countries.

On the comprehensive nuclear deal commonly referred to as the Joint Comprehensive Plan of Action, which was the result of two years of negotiations between Iran and six world powers, Khamenei said, “Concluding the nuclear negotiations is one of the very important accomplishments that was done, and we are hopeful that if there are issues or problems in this area, they are resolved.”

Khamenei’s comments are designed to put to rest questions about his position on the nuclear deal. Hossein Shariatmadari, editor of Kayhan newspaper, had written Aug. 15 that Khamenei was “unhappy” with the deal.

Given that Kayhan’s editor is chosen by the supreme leader’s office, many assume Shariatmadari speaks for Khamenei himself, although that supposition has become less tenable. Regardless, Shariatmadari’s position gives him a large platform, and his original report created a splash in Iranian media, with even the media adviser of the Islamic Revolutionary Guard Corps urging Shariatmadari to speak for himself.

While a new online magazine was created to set straight Khamenei’s positions on key issues, controversy over interpretation of his comments has been one of the hallmarks of domestic Iranian politics and is likely to remain so.

With Iran’s economy set to open up as sanctions are removed as a result of the nuclear deal, Khamenei warned about the influence of foreign countries, saying, “If it is ignored, suddenly we will realize that the enemy has breached certain places and has been busy in dangerous cultural, economic and political work; therefore, we have to be absolutely careful.”

Khamenei said that all citizens should be vigilant against enmity from Israel and the United States, but he stressed that “the responsibility of the officials in this field is more.” He urged officials to "take a revolutionary position in front of the enemy" and do so "without fear."

“From the first day of the revolution until today, the enmity from the Zionists and Americans has not decreased, and this reality under no conditions must be taken lightly in the minds of the officials,” Khamenei said. “The methods of the enemy and their blows might become new, but all economic, political and cultural officials do not get caught in the designs of the enemy.”

Khamenei praised the administration’s efforts in lowering inflation and bringing about “relative economic stability,” calling it “one of the positive actions of the administration that must be continued.” When Rouhani took office inflation was over 40%; it is currently around 15%. Khamenei did add that the rate should be below double digits.

​The meeting took place on the occasion of Administration Week. Khamenei said the week in August was chosen because both former Prime Minister Mohammad-Javad Bahonar and former President Mohammad Ali Rajai were assassinated in an explosion on Aug. 30, 1981.