If the international community opts for passivity on a two-state solution instead of intervention, the policy vacuum might attract many negative factors and ignite violence. 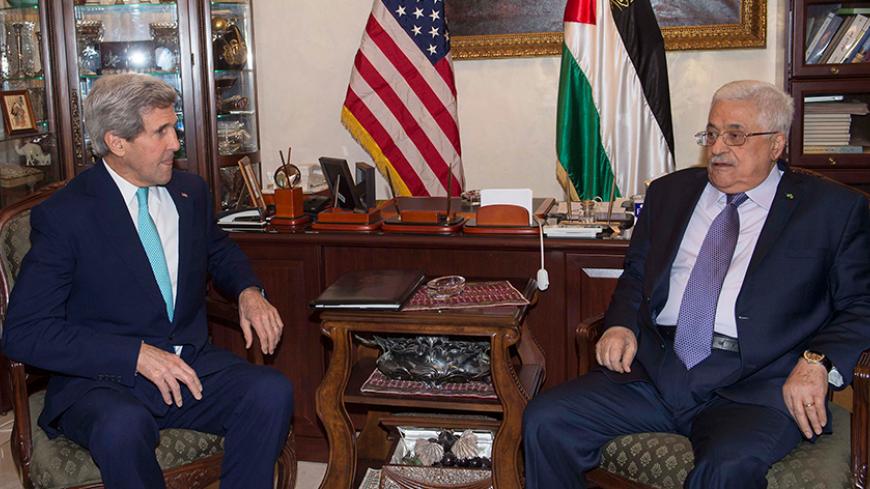 In recent months, the Palestinian leadership in Ramallah was told repeatedly to wait until after the Iran deal for an intervention by the international community in favor of Palestinian statehood. President Mahmoud Abbas and his senior advisers heard this promise from the Americans, the French, the Germans and even the Russians. Visiting the government offices in Ramallah these days, one comes away with the feeling that there, in the aftermath of the agreement, waiting for the international community has become synonymous with “waiting for Godot.”

A senior Fatah official who played a central role in the Oslo Accord and ever since, told Al-Monitor on condition of anonymity that he and virtually all of the Palestinian leadership have given up on the international community doing anything with any timing that will be relevant for the establishment of a Palestinian state. He said, with unconcealed anger, “Both the US and the EU have given Israel a free pass to expand settlement construction in a way that will, already in the near future, make a two-state solution impossible. The last Kerry initiative [2014] was full of good intentions, but it failed because the American administration was attentive to [Prime Minister Benjamin] Netanyahu's demands. President [Barack] Obama was taken aback by the experience and soon may become a 'lame duck' in regards to any major policy initiatives, while the EU is too weak to act on its own.”

This Palestinian source, a man with a lot of experience in peace negotiations, claims that there cannot be effective mediation on the resolution of the Israeli-Palestinian conflict without a prior understanding [of past processes] and acceptance that it may fail. According to him, what brought about the signing of past Israeli-Palestinian agreements were several necessary conditions, as follows.

A first necessary element toward an agreement is the courage of leaders on both sides to make historic decisions according to the land-for-peace formula within a comprehensive peace strategy. A second element is for joint strategizing negotiators to find creative win-win solutions within a common peace strategy. Another necessary condition is forceful backing and intervention on the part of the United States, either at the beginning of the peace process (i.e., the Madrid Conference of 1991) or at the endgame of negotiations (i.e., the Oslo Accord 1993-1996).

He is right. There are good reasons for the current peace process “fatigue” of the international community. First and foremost are the results of the last Israeli March 17 elections, perceived in the world as rejection by Israel (not just by Netanyahu) of a two-state solution. Furthermore, both the United States and the European Union are far more preoccupied with the Iran deal implementation process and the situation in Iraq and Syria, given the success of the Islamic State, than they are with a hopeless Israeli-Palestinian peace process.

A senior State Department official, when asked about this Palestinian despair, told Al-Monitor on condition of anonymity that the skepticism of the parties as to the international community's rescue of the peace process is indeed justified and could perhaps become an advantage. He said, “There will be no significant move by the US unless the parties are ready to negotiate. The administration will not disengage but, at most, will be active only in order to stabilize the situation on the ground and to prevent unilateral activities that may undermine a future two-state solution.”

It is understandable that the Obama administration is disappointed with Netanyahu and Abbas. Yet, the price of international passivity on a two-state solution may be high — far too high. In a policy vacuum, many negative factors may enter the field, some even of an irreversible nature. Settlement expansion will continue given the nature of the current Israeli government. Already today there are more than half a million Israelis living east of the Green Line, about 400,000 of them in the West Bank and others in east Jerusalem, according to a 2014 report by the Israeli Bureau of Statistics. According to the senior Fatah official who spoke to Al-Monitor, any addition of another 100,000-200,000 settlers will make the two-state solution totally impossible. Furthermore, the Palestinian despair will most probably lead to an outbreak of violence in the form of increased terrorism or a third intifada and, in reaction, an Israeli reoccupation of cities.

Without a viable Israeli-Palestinian peace process, the balance of forces in the region will further deteriorate in favor of extremist fundamentalists and terrorist movements. Hamas is actively encouraging violence from the West Bank in order to strengthen its position there. The situation in Jerusalem may be the most dangerous one. A clash there in relation to the holy sites between the most extreme elements on both sides may ignite violence, threatening to turn the conflict into a religious war. If these gloomy forecasts actually materialize, even partially, the international community and the United States will find themselves forced to intervene in favor of the two-state solution process. While the US administration may be correct in assessing that a viable peace process is a very daunting task given the position of the parties, it may, after all, soon come to the conclusion that the Middle East is too important to be left only to the Middle Easterners.